The setting is outlined in Part 1, but I'll rehash the premise here.

An Earth-like planet plunged into an ice age roughly 2,000 years prior to the story. The ice sheets extend to a latitude of about 50 degrees above and below the equator, though I this story (so far) takes place in the planet's Northern Hemisphere. At a latitude of about 67 degrees north are a series of ten or so small villages, each with a population of 500 people.

The technology is roughly that of the late Victorian era - so no automobiles. In fact, there is no clear boundary between icy land and frozen-over water, and it would be extremely dangerous to travel overland in any way. Submarines have not been developed, nor have airplanes; a lack of fossil fuels means that internal combustion engines are nonexistent.

Some of our heroes have gone rogue in an airship to see what lies beyond the Rocky-Mountains-esque mountain range to the south of their land. To their surprise, there is nothing but more ice as far as the eye can see. Yet they are brave, and they are determined to carry on, risking life and limb to go where nobody has gone before and returned to tell the tale.

The problem is, they forgot to bring a compass - or, rather, the engineer dropped it shortly after takeoff. They have nothing that they can use to create a new one. The crew decides to use the Sun for navigation; unfortunately, they're in the middle of winter, where the days are extremely short, if existent at all. It seems like they won't be able to find their way.

They could just go straight, and that is in fact their plan, but a storm hits, and they lose their bearings.

How can they figure out which direction they are going? They have only the supplies on board a typical airship - maintenance tools for the engines (e.g. wrenches, screwdrivers, drills, etc.), food, paper and pencils, some clean clothes and sheets, and various personal items.

I should add that I'd like to avoid extended discussion; please use general chat or a separate chat room created for Part 1.

You don't really specify what equipment they've got, so I will assume equipment such as would be found on a long-distance airship or sailing ship on Earth in 1900.

In particular, they would have a sextant, a marine chronometer, and a navigational almanac, in addition to the now-lost compass, and are familiar with the constellations.

Once you've established north, maintaining a constant south bearing is easy, even without a compass: pick two distant south-pointing landmarks in line, fly towards them, and once you reach the near one, pick a third distant landmark in line with the second. Repeat. Periodically re-find north to correct for navigational errors.

Since they have electricity and I assume some spare wire they could create a coil to magnetise a needle or something equally small. They now should have everything they need to build a Needle-and-bowl device

Well, you have vitorian-era electric engines on board. Dissassemble one, pick up the magnets that are used inside it, and build a new compass.

Anyway, in the comment thread on your other question, you said that "since the airships spend so much of their time above the clouds, only a small percentage of the fleet needs to be docked at any point in time", so this is not really an issue. Above the clouds you always can see the sun/stars and orient yourself.

Even that far north, during polar day, they can establish north/south by the length of the shade of a vertical stick. Longest shade points south. Sun is highest when south - will make shortest shade. You need fairly even area (no inclines).

Middle of the winter is similar: find direction when sun emerges over horizon, where sets, and divide in the middle - it is south. All you need is unobstructed flat horizon - so in mountains you are screwed.

And stars! Even during polar night (which could be twilight because sun is just under horizon), you can see bright stars like Vega.

But people would not adventure far away during winter - too cold, too windy. Hunker down and hunt seals. Explore in summer instead.

Others provided navigation if they have access to technology. My solution is useful when they get stranded, airship crashes, and they need to walk home.

Some good answers already on navigational methods, but there's one question - and it's a non-trivial question if you're being realistic - that you will need to answer: what kind of charts would your airships be using? And by "kind of chart", I'm referring to the cartographic projection used to turn a spherical planetary surface into a flat chart.

This is important because there will be no preexisting charts of the new regions south of the mountains. Your protagonists will have to include at least one kick-ass mathematician and one kick-ass senior naviator (possibly the same person) who will need to be able to draw new blank charts with Lat-Long graticules on them, on which position fixes may be plotted.

In our world, Mercator projections have been the preferred navigational chart: they create a rectilinear grid in which direction is always accurate. These are huge advantages (as I can personally attest, having navigated at sea for some years.)

However, Mercator projections do not work in polar regions. If you are operating close to the pole, you will probably want to use a Polar Azimuthal Equidistant projection, which isn't bad for practical navigation - as long as you don't get too far south. In this kind of projection, meridians of Longitude are straight lines, and parallels of Latitude are circular arcs.

So, what sort of map would your civilization have built? Too far south, and Polar Azimuthal projections get less useful; too far north, and Mercator projections cease to exist at all for practical purposes.

Either way, it's going to affect the crew's priorities and their ability to determine where they are. This will presumably have a big effect on your story...

Other more reliable methods are listed...but as an alternative, a weather watcher should be able to figure it out. The polar region of the globe has a much stronger and predictable wind pattern that doesn't fluctuate much. This polar Jetstream can be used to determine direction...not very accurately, but the winds will always be from the west as it circles the pole. This isn't as true on land, but in the air, it's very steady and can reach speeds of 160 km/h. A couple wiki quotes: 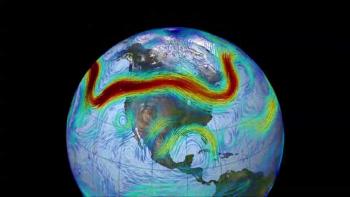 Also of potential interest to your story line as it would play absolute havok with your airship...copied from wiki on Jet Streams:

Polar night jet[edit] The polar-night jet stream forms only during the winter months, i.e., polar nights, of the year in their respective hemispheres at around 60° latitude, but at a greater height than the polar jet, of about 80,000 feet (24,000 m).[60] During these dark months the air high over the poles becomes much colder than the air over the equator. This difference in temperature gives rise to extreme air pressure differences in the stratosphere, which, when combined with the Coriolis effect, create the polar night jets, racing eastward at an altitude of about 30 miles (48 km).[61] Inside the polar night jet is the polar vortex. The warmer air can only move along the edge of the polar vortex, but not enter it. Within the vortex, the cold polar air becomes increasingly cold with neither warmer air from lower latitudes nor energy from the sun during the polar night.[62]

Finding direction from the sky is trivial, sun and moon have predictable paths with clear directions and the rotation of the planet gives the appearance of the stars rotating around a specific, easily recognized and well known, point in the direction of the pole.

Determining your latitude after getting lost is also trivial. You simply measure the angle of the "pole star" mentioned previously or the highest (noon) angle of the sun. One is pretty useless without precise instruments near the poles and other near the equator, but there should always be atleast one simple way to measure latitude available. Presuming you know the relevant angle for your target at this date and the correct date, of course. This tells whether you need to go north or south to get back to known area.

Longitude, which tells whether you need to go east or west to get to a known location, is much harder. There are basically two usable solutions.

If you have clock set in the time of a location of known longitude, you can simply check what time it shows at noon to determine relative longitude. Accuracy depends on the accuracy of the clock. It seems likely your victi... characters would not have a precision chronometer required to get accurate longitude, but neither would they need one. They simply need to know whether to turn right or left after returning north enough, right? Ordinary clocks should be able to give them that, if each step of travel is short enough to avoid the inaccuracies of the clock from accumulating. An airship capable of flying above the clouds does not need accurate positioning to find a target near a major mountain range with recognizable peaks.

If for some reason they do not have a usable clock, say, some idiot put the clock in local time before anyone estimated the longitude or the clock stopped during the storm, there is an alternative method that is based on using the location of the moon to get a location independent time and then using the positions of the stars to get the longitude. But it requires knowing the relevant astronomical data and knowing how to use it. Ships used to carry this data just in case, but if your people are not supposed to engage in long distance travel, they wouldn't have this. An astronomer or astrologer might have the data and know how to use it.

It should be noted that a compass is really only useful for navigation by "ded reckoning" or by keeping track of distances and directions traveled. An airship can only use this, if the crew can see the ground and measure the distance. As such it would be useless to an airship that "lost its bearings" in a storm.

Given late Victorian-era technology, it's not unreasonable suppose your engineers could build a gyrocompass. In our history, practical versions were patented in 1906-08 https://en.wikipedia.org/wiki/Gyrocompass#History So your airship is equipped with one or more, and the magnetic compass is not needed.

Not the answer you're looking for? Browse other questions tagged reality-check climate earth-like airships navigation .

11
Arctic Airships, Part 1 - Generating Electricity
7
How would a large arctic mountain range affect the weather?
12
What are the consequences of using limited anti-gravity for steampunk-style airships?
1
How close to Impossible can Navigation be on a Jungle Planet (for a Stone Age Civilization)?
14
Armament for airships filled with non-flammable gas
10
Which part of the universe would make celestial navigation most difficult for a planet?
6
Post-apocalyptic aircraft
5
Additional applications for advanced airships in my earth-like world
3
Dragon sailing Airship Part II: Room Temp Superconductor Anti-Ballast
9
What are some of the structural problems inherent to a kilometer-scale hydrogen airship?