Could there be an animal who breathes CO?

A normal cellular respiration uses O2, so my question is if it's possible to have a respiration with CO instead of O2.

Is that possible? If not, is it possible with some changes like the chemical reaction or the whole mitochondrion (e.g: the animal must be able to eliminate graphite from cells)?

CO is not going to give up that oxygen without a fight. It is happy as it is, but in a reaction it wants to become CO2. Its function in any metabolic pathway is as a reducing agent. That is the role played by sugar in our metabolisms.

Carbon monoxide is quite stable and chemically inert under normal conditions (25 C and 1 atm) despite a carbon valency of two. At higher temperatures it becomes reactive, behaves as though on saturated, and can act as a powerful reducing agent-a property used in many of metallurgical processes such as in blast furnaces.

From Thermophilic carboxydotrophs and their applications in biotechnology.

CO metabolism begins with a reaction that can be considered a thermodynamically favorable disproportionation, resulting in CO2 and a pair of reducing equivalents, or molecular hydrogen as products: CO + H2O -> CO2 + 2H+ + 2 e-

same source; this diagram showing various metabolic pathways which all start with CO acting as a reducing agent. 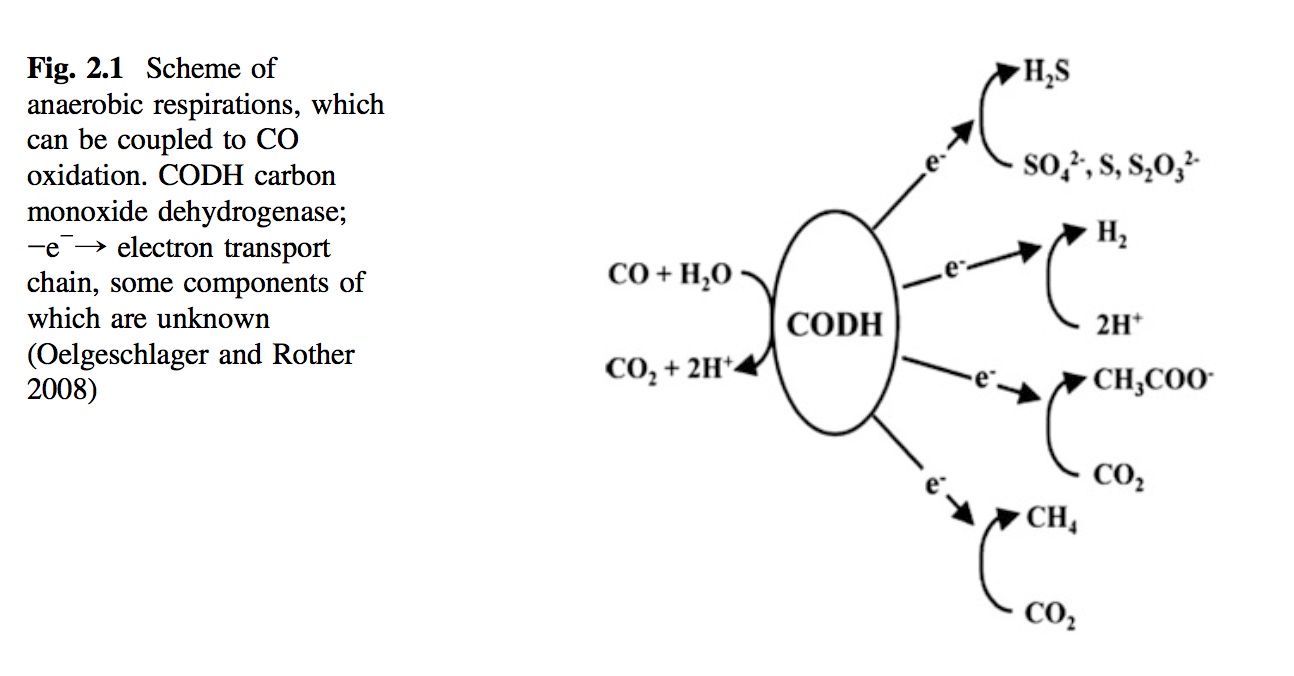 These metabolic paths count as respiration, some aerobic some anaerobic. But in every metabolic path I found the CO was oxidized and donated electrons. I do not think there would be a metabolic path where CO was happy to become a reduced carbon of some sort.

However, if you'd like to take it a step further, the fact that carbon monoxide only acts as a reducing agent does not exclude its participation in a species' metabolism. The trouble is that the organism would have to have a wildly different metabolism, meaning that it would have to be evolved from a common ancestor much further down the evolutionary tree.

Most of the organisms we've found with strange metabolisms (called extremophiles) are in the archaea family. It would be conceivable (although of course unlikely) that a multicellular organism had evolved within the archaea rather than eukaryote domain.

One of the most consequential moments in the evolution of life on our planet were the mutual endosymbioses between chloroplasts and cyanobacteria, and between mitochondria and proteobacteria. In the world you're building, it would be possible that there was an endosymbiosis involving an archaea, such that the multicellular organism's metabolism evolved around the symbiosis of an archaea.

The idea of the mitochondria is that it generates ATP through pumps that exploit a chemiosmotic potential across its membrane. This potential can be established without having to start from the same reagents.

To borrow from Will's answer, you could for example have a metabolic pathway that starts from carbon monoxide using CODH

You could thus have a buildup of $H^+$, establishing a gradient just like in a mitochondrion. The $CO_2$ produced in this reaction could also be used to produce methane, which would establish yet another gradient.

In summary, the existence of the organism you are describing is totally plausible, but you would have to tie it in with an alternative evolutionary branch. Do keep in mind that if you try to approach the problem in extreme detail, you may find yourself digging a deep hole. We don't yet fully understand real metabolism, so to try and invent a complete metabolic system would be a mammoth of a task, given the incredible complexity and interconnectedness of metabolic pathways.

I'm only in partial agreement with the two previous answers. I think there are two parts to this question. The first part is to explain where all of the CO is coming from to allow its concentration (in the atmosphere??) to be high enough for it to be a principle source of energy. Assuming an atmosphere with high amounts of CO, then there is no obvious reason why it couldn't be used. You may be aware that the human body produces CO and uses it as a signalling molecule. You may also be aware that certain bacteria metabolize it, so there's no reason why a multicellular animal couldn't, afaik. The issue, as I see it, is the question of whether a given atmospheric composition (say 60% nitrogen, 1% water and 39% CO) would be meta-stable. Oxygen is both the product of and the source for respiration reactions. CO would have to be the same. Even starting on a world where some life exhales (emitted) it, and some life metabolized it, it isn't obvious to me that such a world wouldn't evolve rapidly into one similar to ours (with say a 78% N2, 21% O2, 1%H2O atmosphere) leaving your CO breathers as fossils. Note that CO is 30 times less soluble in water than CO2, which would be another problem for a development by natural selection (if life evolved first in water)...

17
Sharks with frickin' lasers!
3
Results of magical control over the chemical functions of cells in the human body?
6
How could a foam habitat support animal life?
6
Ecology with methanogenic respiration
3
Immunity from all infectious diseases?