How realistic is the placement of the cities and borders on my map?

I need some help with the placement of the cities on a map of one of my continents. I'm not looking for opinions, but more for a reality check on how realistic it is in terms of where things are and should be. Below I'm going to list a few things about the map, and include a link to the map itself: 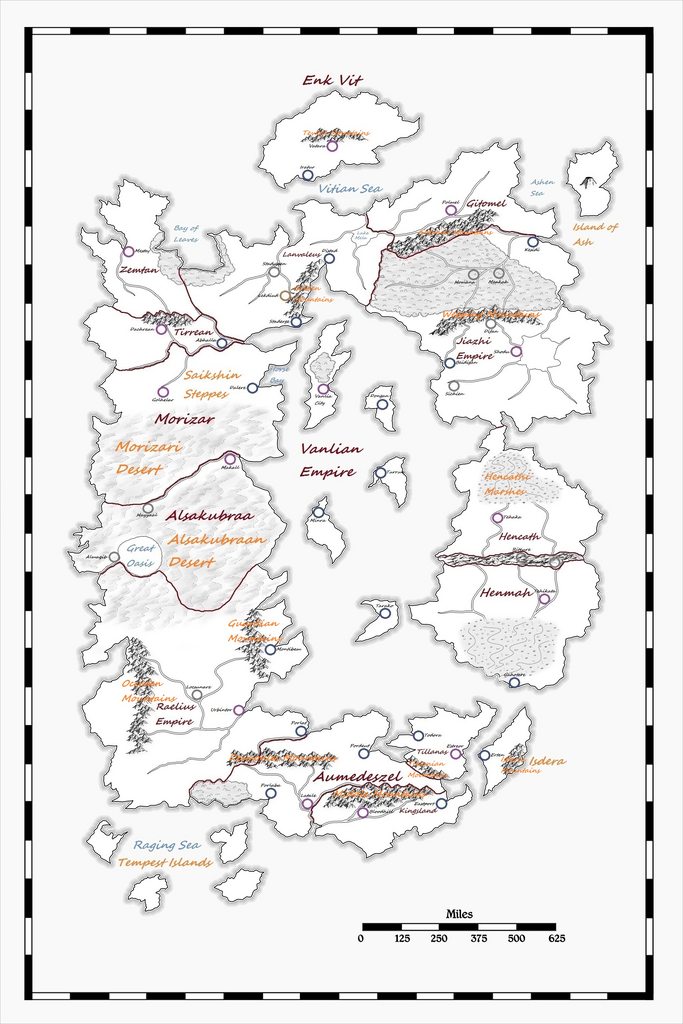 Distad is supposed to be a capital, but is blue like a port because I used the wrong color on accident.

So, taking in the above information and the map into account, I am asking you the following questions:

When placing and naming civilization markers on a map, we can follow some basic rules.

Where rivers reach the coast, there will typically be at least some amount of tidal estuary and delta, so the coast should angle in a little there; unlike most bays, these will be sharp rather than rounded. Urbintor is a good example.

Humans live on the water, and on trade routes, so the first (and probably oldest) cities should go anywhere a river joins the sea, like Markal, Porlat, Kesidi, Mestas, and Urbintor again - great trade and fishing.

River forks are also good places for trade and water, too, as well as being nicely defensible, protected on two sides by a natural "moat": in this map, this seems to be one of the main reasons for placing cities.

There's a great sheltered bay with two rivers leading from it, leading to Bloodhill and Latale. This bay would normally become a huge city pretty fast, unless there's a good reason for it not to. Probably the biggest in that continent.

Bays are caused by erosion from the sea, so will typically be rounded (no examples on this map), rather than pointy (Distad, Dalere, Vantia City, Turrum, Minra, Dongan, Montibem, Pordeut, Todora, Estreor, Porlaba, Eastport...), unless they are fjords between two mountain ranges. Fjords will typically end in at least a short river.

Names mean things, and those things get used in multiple other names: in Pordeut, Porlaba, Porlat - I'd suspect that the "por" is a degradation of "port", and "lat" has some meaning, as it's also seen in Latale.

Eastport shows the word non-degraded, showing regional differences, which is nice. The same region (Kingsland) has BloodHill - that region seems defined by readable Englishy names. My suspicion is that this will be where the heroes will start out, and venture into more foreign-sounding places. A bit tropey, if so, but not a terrible thing.

Outside of that southern continent, though, names seem like just 2-3 random-syllable things, with no clear sign of meaning. Having several river-fork cities have a similar prefix or suffix (-ford, -bridge), and so on, will add verisimilitude: see https://en.wikipedia.org/wiki/List_of_generic_forms_in_place_names_in_the_United_Kingdom_and_Ireland but obviously, like your "por-", make them regionalized to the tongues of your world, rather than using them directly.

As a counterpoint to that, for a fiction writer, having names which are easily confused by the reader (bannockburn, bannockbridge) is usually a bad thing. I'd go with having the first syllable unique in each case, and shared suffixes, unless the point is to show the two places are very close together (bannockburn being just upriver from bannockbridge, perhaps).

As well as rivers, other trade routes matter - places where major roads join, mountain passes, etc. Also significant sources of resources, like mining town, fishing villages (the whole coast would normally be populated with these before inland areas got many towns), etc.

I like the placement of Erten & Estreor, placed to take advantage of the trade that flows down that channel from Gahotere and the Vanlian empire, to Kingsland and southern Aumedeszel.

The placement of your settlements are not bad considering the location of features, but your features have major issues (see below), and the number of settlements is fine considering the size of the map, although Ash Island should probably have some cities on it, volcanic ash makes for incredibly rich soil. The country density is comparable to europe, so unsettled land should be fairly rare.

Well first you have a large desert with no mountainous border at the same latitude as several gigantic marshlands, that makes no sense. Deserts are generated by latitude or terrain, this one appears to be made by neither. It also seems to have a lake in the center of it with no source for the lake.

Second you need more forest, early civilizations and cities that do not have a steady source of timber don't survive for long. Deforestation is probably the second leading cause of city collapse after warfare.

third many of your rivers appear to start near the coast and flow inland, without the coast being mountainous this makes no sense. The Jiazhi area appear a particular offender.

National borders tend to follow obstacles. In most cases, the borders make sense. As was mentioned by Kolbítr, rivers are not usually borders unless the river itself is large enough to be an obstacle. Another way a river can be a border is if the two nations are on relatively good terms. Those cases could happen in your world but I see too many instances of it. The excuses would get rather thin.

Any conquering force that travels across a kingdom to seize the fertile land along a river is very likely to put in the extra effort to grab the extra set right across the water. Note that if the river is wide, violent, or has drastically different shore elevations (like a river that runs along the base of a cliff), the different kingdoms might be reduced to shouting insults at each other. The border is more likely to run through the desert than along a river.

The only city placement issue that I see is Gothelar (sp? it's hard to read some of the letters) in Morizar. It is unlikely that a city would be placed at the start of a river. For one thing, rivers generally start in mountains and the terrain tends to be too steep for growing food. If it doesn't start in a mountain, it generally starts at a lake or marsh that then drains out the river (I don't see that on the map). There could be a reason to place a city there (religious, resources, political) but that doesn't show up on the map.

Not the answer you're looking for? Browse other questions tagged environment geography cities map-making or ask your own question.

38
Creating a realistic world map - Countries Borders
9
How realistic is the geography of my map?

44
What software is available for map creation?
9
How realistic is the geography of my map?
2
Commercial Centers vs Capitals
1
How plausible are the terrain and land-forms on my fantasy map?
16
Is this map realistic/believeable?
4
How do I place my biomes realistically with only a köppen and topographic map?
20
Is my river map even remotely realistic?
2
What types of climate would form under set conditions?