Is there a system to create a tarot deck? [closed]

I'll explain the importance of this:

My main characters are mages, but they use 'conceptual magic', pure magic that allows them to create powerful and unique secret arts but with a limitation: they need a catalyst and have a pretty strong bond with it but the magic must be conceptually related to the catalyst. For example, one of my characters uses a pocket watch to use his time manipulation magic.

I have the main 'main' protagonist who manipules fate/destiny. He uses a sword but that's not his main art. He uses the tarot cards granted his mother to fight creating powers, however his power only works when he picks the cards randomly and he has a limit of how much cards can he use due of his mana limitations (mostly just 3 cards) so he must work with then even if the cards are weak/useless (he's a jack of all trades master of none). I want to create his tarot desk in a way he can read them as a fortune teller while having cards of his allies 'predicting' their existence like 'Time' when he meets the time manipulation character. Is there a system to create those decks like if the number of the card means it's more powerful or they must have an 'of X' like 'Queen of cups or King of swords'

The tarot itself is only one of many card-based divination systems. Once someone can understand the basic structuring and ordering of the tarot they can modify this to suit their own needs.

This is a complete system in and of itself. Typically, it has 78 cards, divided into 22 cards called the Major Arcana, and 56 cards called the Minor Arcana. The Minor Arcana are then further sub-divided into 14-Card Suits. The Major Arcana talk of a deeper truth filled with Arcana and Archetypal symbols and imagery. The Minor Arcana (through the four Suits of the Wands, Swords, Cups, and Pentacles) talk of the everyday things that people go through in their lives. The Suits also contain a total of 16 Court Cards or People Cards which are a composite of the 16 different Personality Types.

A general study of cartomancy might be in order if you plan to hang this character's abilities on it. In particular, a card's identity is often less important in a reading than what is on it. For example, in the Rider-Waite deck (https://en.wikipedia.org/wiki/Rider-Waite_tarot_deck), cartomancers will consider the symbols on the card both in isolation and in a holistic fashion. Check out the Ace of Swords: 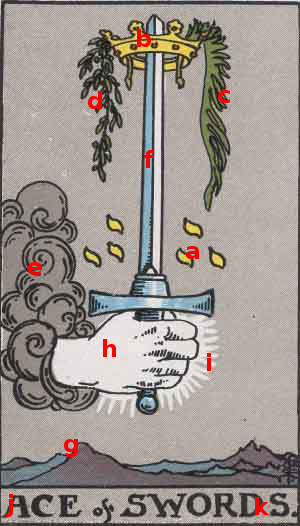 a, which looks like 3 little what might be flecks of fire, is the 10th letter of the Hebrew alphabet, Yod, and is supposed to represent the presence of the divine.

b is a crown, said to represent a relationship with the divine (kings rule by supposed divine right) and spiritual consciousness.

c is a palm frond, a symbol of victory

d is an olive branch, a symbol of peace

e is a cloud, and clouds represent thoughts. These particular clouds are nasty and grey, so they represent troubled or confused thoughts.

f is a sword, representing activities of the mind and the element of air. Swords mean lots of things including rationality, communication, and elimination.

g is a mountain, and mountains represent challenges. There are some particularly steep mountains depicted, so it is to be expected that the challenges indicated are great.

h is a hand, and hands are a symbol of exchange. All of the Rider-Waite Aces have disembodied hands, and they represent divine intervention or gifts.

i is a halo or sunburst, and it's a cue that the haloed object (here, the hand) is divine or spiritual in nature

j is the number of the card, 1 for ace of course, and in numerology 1 is the principle of masculine creation. God is 1.

k is the suit of the card, here swords, and as a sword appears on the card we already discussed the associations above.

Okay, so now that we've looked at every element of the card, let's look at the whole card. The divine hand is offering the sword wreathed with divinely blessed victory and peace. A naive interpretation of this card might be that it is a signal to go forth and attack or kill one's enemies, but remember that the clouds are gray, symbolizing troubled or confused thinking, and that swords also symbolize rationality. So, perhaps moreso than this can be considered the "kill your enemies" card, it should be considered the "stop and think, your brain is a gift from God" card. Depending on where and how it lands. Some cartomancers respect an inverted card (one that is dealt upside down) and apply a twisted meaning to that card in the reading, but others ignore all inverted cards.

Finally, a card's position in the dealing or "spread" is relevant. Based on a card's position in a spread, it might be taken to refer to an aspect of oneself or of another person, and it might refer to a past, present, or future state of affairs. There are a lot of different spreads and cartomancers are prone to design their own, but the main point of the spread is that it's interpretive order prospectively imposed: you decide the spread before you deal. That said, drawing a single card for divination is a common enough thing, but usually the cartomancer has a query or at least an "aboutness" in mind for the divination, "What will happen if I quit my job" or "what will my day be like today."

Okay, so just examining one card we've seen a piece of the intricacy of the Tarot, and that can be a paralyzing thing for someone who is working on a project that involves designing a deck. Therefore, my advice is that you do not set out to create a unique tarot deck. Instead, wield the awesome power of your authorial license to write your character's readings/divinations/castings first, and then design particular cards in a totally ad hoc fashion that support those readings. By the end of writing your book/trilogy/saga you'll have several or maybe a couple dozen cards defined, and you can either set to work designing the rest of the deck around the few cards you've already made or put that off until HBO buys the rights to your story and there's a couple million dollars to be had for the effort. There's nothing underhanded about constructing your deck in this ad hoc fashion, it's very common to design tarot decks piecemeal rather than flowing from a fully pre-imagined design, though more commonly artists do major arcana first and suit cards later (if ever.)

Note that your tarot only has to be as much like Rider-Waite as you want. You can look at other tarot decks to try to get an idea of the conceptual space you're working in, but I fear that that will lead you to an impoverished conceptual pasture. Most derivative tarot decks are either full of practically empty cards (with the worst offenders we'd only need to analyze 3 or 4 symbols for even the busiest cards in the deck) or very closely mimick the structure of the Rider-Waite deck (four suits of 1-10 and court cards for Minor Arcana, often considerable overlap with Rider-Waite in the Major Arcana), and there's just so much more you could do. You could do three suits, or five, or seven. You could have a dozen major arcana or forty-two. Your minor arcana could consist of only court cards but more offices represented. Really, the main thing is you have to have enough meaningful symbols distributed and repeated throughout the deck to enable the reader (or at the very least the writer, you) to generate a story about what the card is saying or doing.

Finally, and not merely because it would be a crime to make it through a post this long without mentioning the late, great Roger Zelazny, check out how trump magic works in his Chronicles of Amber (https://en.wikipedia.org/wiki/The_Chronicles_of_Amber#The_Trumps). Basically, specially-talented characters are able to draw pictures of people they know and use them to communicate with or travel to them. (They can even attack one anothers' minds directly via their trump connection.) They can also travel to or surveil a place by drawing it. A few times in the series the protagonist will deal a spread of trumps for divination in true Tarot style, but this practice is regarded as basically a waste of time even by the characters who do it. Everyone, though, respects them as a means of communication, travel, and combat. It seems like you might intend for your character to produce effects with his cards rather than only predict them, and so the trump artistry described by Zelazny might provide at least some spiritual guidance.

Not the answer you're looking for? Browse other questions tagged magic super-powers or ask your own question.

3
Limited Fate sensing powers to give protagonist of miyazaki style story
6
“Peace through superior firepower” Why is it so effective and how to employ it in medieval fantasy times without the direct use of magic?
6
How would psychics employed by Customs or the Coast Guard use their abilities?
49
Why leave magical runes exposed?
40
What kind of spells would magicians cast in combat if the fuel to magic is very expensive
3
Element Handling Justification: Water manipulation
8
how can warlocks be prevented from taking over a coven?
11
How can the transition from a positive to a negative state be made irreversible for a magical item?