In my land we have a race of human-like cyclops.

The only real difference is their increased strength, and the fact they only have one eye.

Would having one eye affect depth perception, and if so how can I explain a solution to this issue without using magic?

Supposedly birds (those with eyes set on the sides of their heads) compensate for monocular vision with rapid head movements, their brains stitching together images from multiple angles into one 3d image.

Another way birds compensate for monocular vision is rapid head movement. By moving their head rapidly from side to side, birds can observe an object with one eye from two different angles in quick succession. This creates a three-dimensional picture and greatly improves depth perception. Although difficult to see in ducks, this behavior can easily be observed in a backpedaling goose as the bird swivels its head from side to side judging the distance, location, and timing of its landing.

Your cyclopses (cyclopes?) could do the same. They could nod their head as they were going along, as if they were grooving to internal music. This would not preclude them from also grooving to internal music. Or they could sway their heads from side to side like a snake charmer. Or rotate them left to right, as if constantly saying no. There are many head motions your cyclops could make, all of which change the position of the eye and so enable 3d images. I encourage you to try them all in the presence of friends, possibly with a cyclops eye taped to your glasses. Decide which is the best fit for your world.

Despite Will's excellent answer, I feel compelled to answer myself as I had asked this question only a couple days before in biology and the question excited me too. Our body is built to have multiple check's in place to aid us. Think about all the people blind in one eye in the world. They all are able to easily walk and judge depth due to several checks we have in place:

Focal length: If you try to look at something very close to you and then something very far away, you'll notice your vision gets a bit blurry as your eye must refocus. A single eye would be able to tell the distance of an object by judging how much it has to refocus to see an object.

Prior knowledge: If you know the height of some object, you can use it relatively guess its distance and the objects around it.

Relative speeds: Closer objects move faster than farther objects and this can be used to judge speed. For example, when a car is coming towards you, at a distance it seems to be going slow. However by the time it reaches you, it (visually) moves very fast. Your brain combines the change in speed and size of the object to judge its depth.

There are even more ways our brain registers such things which can be found here as Krause showed me.

But... nothing is perfect. Of course a cyclops can be fooled. However, so can humans as we see with the countless optical illusions that artists often like to draw up. An interesting optical illusion is an Ames Room that I recently learned about. It tricks your depth perception and might be an interesting thing to look into.

Humans have about two dozen different methods for judging the distance to an object. Only two of them (stereopsis, the relative shift of an object against the background, and convergence, the amount of inward shifting needed to center the object in both eyes' field of view) depend on having two eyes.

Your cyclops has the following techniques for judging the distance to an object:

In addition, there are about a dozen techniques (perspective, occlusion, relative size, and so on) for determining the relative distance of two objects.

For anyone interested, to expound upon Will's answer, it was discovered in 2011 that birds use something called optical flow to determine distance.

In computer vision, optical flow tracks the apparent movement of points as an observer moves through a scene. This picture tracks the position of similar points between two frames in a video. Notice that points farther away appear to not move as much. Points which don't change as much between frames are assumed to be farther away. 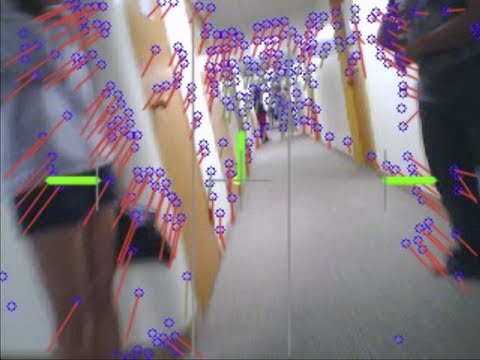 In the experiment, a bird was made to fly between two walls. The walls had either vertical or horizontal stripes. When moving through this hallway, the wall with the vertical stripes would move past the observer, allowing for optical flow tracking. Walls with the horizontal stripes, however, would not not appear to change as the bird flew; in the wild, this would mean that the object was far away (as we saw earlier in the description of optical flow).

It was found that the birds always flew in the middle when both walls (A) had vertical stripes (both eyes could use optical flow tracking). When one wall had horizontal stripes (B and C), however, the bird flew much closer to the wall with these horizontal stripes. Since the pattern didn't appear to change as the bird moved through the hall, the bird assumed that the wall was farther away than it was.

For those interested, the name of the paper is Optic Flow Cues Guide Flight in Birds. There is also a video which shows them flying.

tl;dr To answer the original question, objects which are closer appear to move more than objects which are farther away. Optical flow tracking would absolutely be a viable method for a cyclops (or any animal with monocular vision) to use to track distance.

There are many options for depth perception without binocular vision, but chameleons are probably your best model for a cyclops. Unlike most animals, chameleons have a separation between their nodal point - the point wherelines connecting points in the scene and corresponding points in the image intersect - and the center of rotation, the point which the eye rotates around. This means that, as a chameleon moves its eye, images on its retina move more if they are closer, letting them determine the distance of objects.

As someone who medically lacks depth perception, I can assure you there's several ways your brain learns to automatically compensate:

Scale of distant objects gets matched to the 'known' scale of such objects to roughly get the distance.
Over long distances, atmospheric blur is a real factor.
Overlapping objects can give a good sense of relative distance.
Diverging/converging lines provide perspective.

Truly, how does your depth perception work when viewing something on a flat screen which was shot with one 'eye' (camera)? It really isn't as debilitating as could be thought!

Model an aspect of their sight on what bats and dolphins use for echo location. Normal human sight is completely passive. The eyes only receive light. Echolocation is active. A pulse is emitted, and time to flight from the pulse's return is measured. Have your cyclops emit a brief, bright, possibly infrared or ultraviolet, light whenever he blinks or squints.

This could be worked into part of the action or plot, As the cyclops picks up the huge boulder, and prepares to hurl it, he begins blinking faster and faster as he builds up ranging data. His intended targets become more and more agitated as they know the boulder is coming their way. Also as a countermeasure, those who fight cyclops could carry a jar of hyper-luminescent fireflies who's emanations confound the cyclops' depth perception.

Adding to what people have said about accommodation: In bright light, our pupils contract. This increases the depth of field, and makes accommodation less useful for judging distance. Our technological response to this is sunglasses. They reduce the light intensity, causing the pupils to dilate, which reduces the depth of field, so your eyes have to focus carefully on what you're looking at. Your Cyclops people could have biological "sunglasses" built into their eye. In addition, you could have their retina be very light sensitive -- lots of rods. This would reduce their visual acuity, so then make their eye large to compensate (like a giant squid's eyes). Using Earth biology, this would limit your Cyclops people's color vision.

As an adult who only has one working eye, your answers is Yes, it would completely prevent 'depth perception' as most humans know it. I can tell you that, having never known stereoscopic vision, they will have adapted to the same kinds of ways I use, whether to navigate a crowded room, drive a car or catch a Frisbee... comparative size, depth of field, many of the other methods mentioned in the excellent answers above.

There are many humans that only have the use of one eye (myself included), yet do not struggle significantly with depth perception. There are many ways to judge depth other than using multiple eyes with a baseline between them. Size, parallel lines, shadows, discolouration (scattering) are just a few of the many techniques all humans use subconsciously in conjunction with bi-angulation. People with only one eye are forced to rely on these other techniques more heavily but the situations in which you are observing withing without reference to aid you judgement and depth of field actually matters are very limited. Okay, maybe being a pilot is ill advised, but beyond that. Besides ranging devices are not uncommon and could easily be built in to things like planes (which I'm sure they already are).

I'd like to think that cyclops have no problems with depth perceptions because their eyes have multiple lens or irises; pretty sure their eye construction would be different. One has to ask why nature would favor a creature with one eye. If the single eye is just some strange mutation then there should be some amazing property of it that allows the species to survive.

You could make them a species that lives in low light environments though. There are some cephalopods with large eyes that do this. If you did this then you could make vision a secondary sense and not worry about their ability to see long distance. Just have them hear their way around using echolocation and then survey what's immediately in front of them with their microscope like eyes.

38
Benefits of or reasons why a species would have only one eye?

4
How do Cyclops hunt?
26
Anatomically Correct Cyclops
7
What side effects would a genetically enhanced 10 times stronger human have?
6
Tusks of a Cyclops
15
How to make all magic-casting innate, but still rare?
3
Creating a plausible Cyclopia disease
3
For a species that prefers throwing large rocks at foes, what else would those developed muscle groups make them good at?
25
Would a hibernating, bear-men society face issues from unattended farmlands in winter?
24
Most practical method for a secret demographic to get its news?