In this medieval-fantasy (Tolkien-esque, except humans are the only race except for some incredibly rare magical ones) world, a few individuals ( have become mages, sorcerers and monks - which are all in-universe terms for the same thing - by using precious stones to channel the magical abilities inherent in every human. The powers available to the magic user vary depending on the inherent elemental connection of the stone; for example, someone with a ruby ring could manipulate fire, or someone with an opal necklace could control water. (A magic user could collect many gemstones and thus use a plethora of powers.)

Because of the relative rarity of the gemstones necessary to wield magic, the number of powerful or skilled mages is very low. This means that mage-on-mage battles are ultra-rare, the stuff of myths.

A group of dark mages (using onyx to wield shadow magic) have now joined together in an attempt to take over part of the world. Any member of the group wants to wear something which a) looks good/inspires fear in enemies/inspires confidence in allies and b) gives them the most mobility and protection for fighting in.

Most importantly they need to keep their onyx somewhere secure on/in their person/attire, because losing that in a fight means almost certain death because all magical control is lost instantly.

Their clothing needs to be obtainable in a medieval-fantasy setting, though it can be quite expensive because the mages have the ability to teleport and thus steal things from the treasuries of key kingdoms in the world.

Preferably I'd like a differing outfit for male and female mages, but this isn't necessary, I just think it'd be more interesting.

What should I have them wear?

Follow-Up: Uniforms identify the wearer with the goals of a group and their role in the group. They take individuality away and put the responsibility for the actions on the entire group.

Of course they might wear non-uniform uniforms, with common insignia or motifs and individual combinations.

They wear absolutely nothing, because that stuff gets in the way of the aura projected by the stones. No hair either, for the same reason. All stones are attached directly to the flesh by way of piercings and implants. The visual effect of each piercing is augmented and amplified by surrounding tattoos of glyphs and sigils. Probably they have more piercings than are really necessary for the amount of magic gems they have, so as to camouflage which ones are really necessary for their power.

In between battles they wear long trench coats and fleece lined boots. Mages get chilly too and it is easy to throw that stuff off in a hurry if they have to do magic battle.

My Google Image search of full body tattoo proved fairly overwhelming. I am sure there are more people living now with full body tattoos than the rest of history put together. 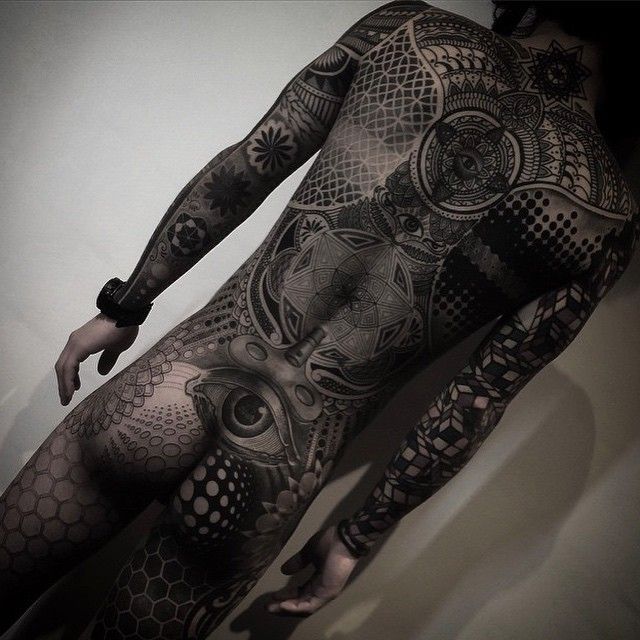 Not the answer you're looking for? Browse other questions tagged science-based magic culture clothing or ask your own question.

46
How could a group of 6 people destroy an army?
8
How to defeat a nature Mage?
6
How to avoid magic from affecting society's technology?
6
Keeping talisman makers from being overpowered?
13
How to realistically implement magic-users in medieval warfare?