Are my deserts accurately positioned?

I have asked previously how I could create an earth-like world with as many deserts as possible in it. I have received some useful answers and have tried to draw a realistic map of what I intend for my continent.

Unfortunately, I have been having trouble using Geoff's Climate Cookbook... if you ask me, it is not very user friendly for someone with no basic knowledge of meteorology, at least before we get the hang of it (and I don't think I got it, not for a long shot). I'm very confused, especially since a vast expanse of my continent rests on the south hemisphere and not the north, which means I have to invert a lot of things.

So, I would like to ask you if you think this map is plausible.

(I'm sorry if it is somewhat simplistically drawn, but I don't want to draw a very detailed continent to find out at the end that it isn't plausible) 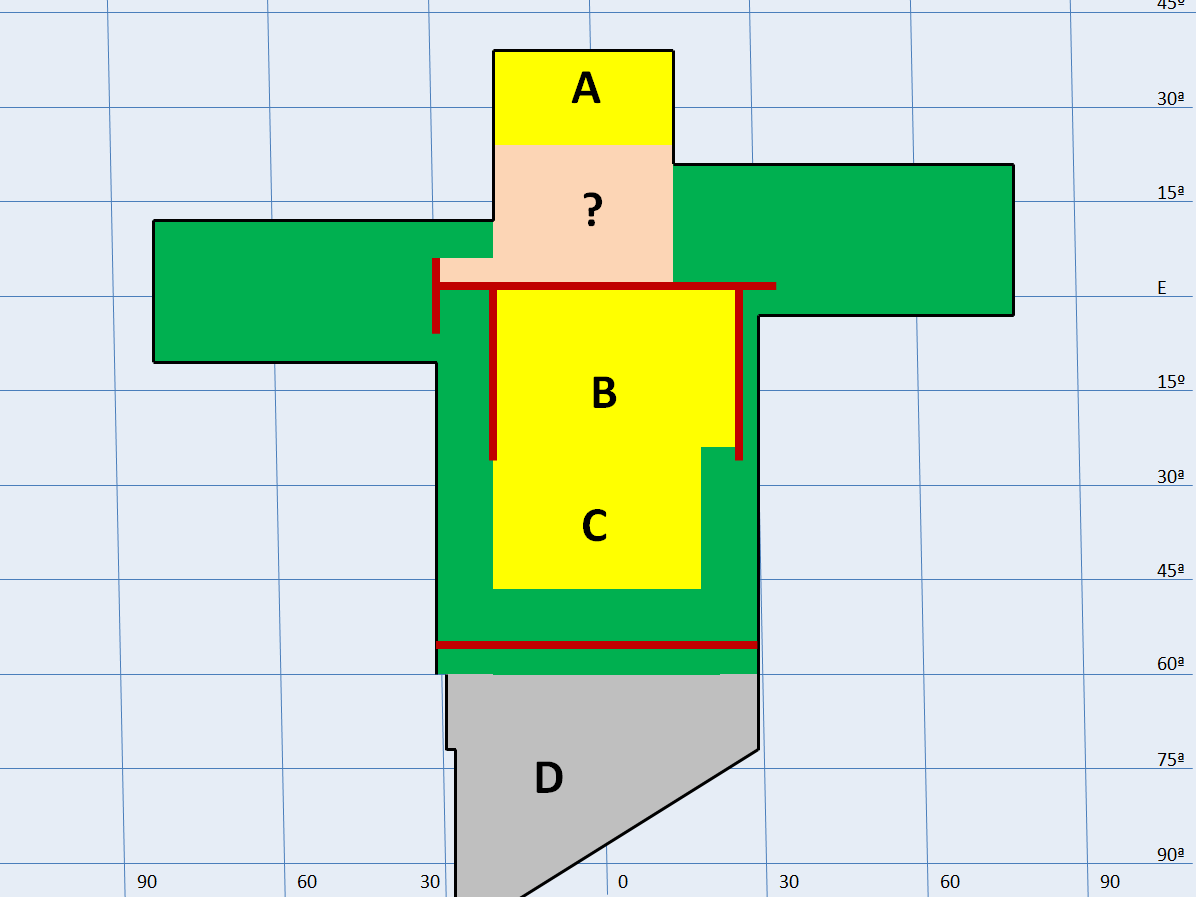 Please read the edit at the bottom of the post

Now, I don't want to dwell on the green areas just yet. If you would like to help me with the "?" area climate, I'd appreciate it, but I'm willing to make a separate question for it, in order to not have my question closed for being too broad.

What I want to know is if the desert areas are well placed.

Area "A": I know it's a stretch, but I was thinking that it could be a coastal desert, dried up by the Hadley cells. I only want it to be plausible, not probable

Area "B": Hot desert created by the rainshadow of the mountain ranges in the east, west and north

Area "C": Hot desert created by a large expanse of land in the Hadley cell

Area "D": Cold desert (it's okay if there is some precipitation on it, in the form of snow)

Please note: This is an earth-like planet, with the same size as earth and the same duration of days and years. However, it has almost no axial tilt, in order to maximize extreme weather and to avoid the monsoon effect

EDIT: As of July, 17th, I have redrawn my map so that areas A and C would fall more in line with 30º latitudes

This desert is mostly appropriate. An analogy to this continental feature is the southern part of Africa. Most of this is the Kalahari desert, especially on the Eastern side. If your planet rotates in the same direction as Earth, you will have a similar gradient of dry desert on the east to semi-arid savanna on the west. There is even a bit of wet savanna on the far western coast.

Anything within a few degrees of the Equator will be a rainforest. Even the northern half of Africa, which quickly grades into the Sahara Desert, is relatively wet, up to about 4 degrees N at Bangui. Therefore, your mountains would be expected to be very wet, with lots of small rivers coming down to feed a rainforest pushing out to about 5 degrees from the equator.

Savanna would then persist up to at least 10 degrees north. In Africa, N'Djamena is at 12 N but still wet enough to support agriculture in river valleys and herding on the open plains.

South of 10-15 it would become true tropical desert. With the mountains you mention, the land would be drier, but still not a desert. An example from Earth would be Dodoma, Tanzania. It is surrounded on three sides by mountains at 6 degrees S, but is not a total desert.

A more unique situation of a city in tropical desert surrounded on three sides by mountains is Lodwar, Kenya. However, in that case, the desert basin is small, a portion of the Eastern Rift Valley. Your continental scale depression between mountains will accrue enough moisture into it (from rivers from the equatorial mountains) that it won't get that dry.

There are many deserts at this latitude, but you need to cut them off from the ocean. A west coast between 30-45 degrees from the Equator is Western Europe, and East coast is either China or the Eastern US. All of them are pretty wet. Instead, you want the western US. Cut off between the Coast ranges and the Rockies, the interior great basin of the US has the same latitude range you want. Extend those red mountains south enough to cut off the land from moisture carried in prevailing winds at sea.

Polar regions are pretty much deserts. The taiga cuts out between 60 and 70 N and thereafter it is tundra.

Assuming your planet rotates the same way as the Earth, this area will get significant rainfall from the rainforest and ocean regions to the West of it. Prevailing equatorial winds will blow moisture in year round.

Since we already determined that A is like the southern part of Africa, this region is remarkably similar to Central Africa, complete with a jutting projection of rain forest analogous to West Africa.

In general, the areas closer to the coast will be a bit drier, and in the center of the continent a bit wetter; but the 'armpit' of land on the west coast will see heavy monsoons. Typical rainfall regimes might be like Douala, Cameroon in the 'armpit'; Port Gentil, Gabon northwards along the coast (note the two distinct rainy seasons); a drier Kinshasa in the coastal regions; and a wetter Kisangani in the interior. As you head north, it will turn into savanna by at least 6-8 N.

Africa is pretty dry all in all, and a good continent for you to use as a model. Just keep in mind, especially in southern Africa, Africa also tends to be the highest continent. Most of the southern half of the continent is at 1000m +. If you are copying climate conditions, make sure you make it warmer if your places are at lower elevation.

? could be either desert on grassland believably, in fact it should probably extend further east. the intertropical convergence will drop some rain especially close to the mountains but not a lot. The top of A will be prime fertile territory, placement wise it should be nice and fertile not desert. 40 degrees is where most of our prime farmland is.

C should be more fertile, especially the lower and western portion, at 60 degree latitude it will have more rain, it is basically similar to europe or the lower portion of canada, at worst you could make it savannah. The top of D will be more fertile as well, climatically it is more like sweden with lots of forests. deserts are spread more laterally than vertically.

Check similar latitudes on earth for inspiration. hot deserts cluster around 30 degrees while prime farmland is near 45-50 degrees. Basically almost all your climates extend too far vertically. Of course the less detailed the map the less detailed you can make the weather patterns.

Also this geologic make up is going to have volcanics on the eastern mountain range at least, you don get mountains that close to the coast without active subduction. And if the two western and the one northern mountain ranges are still being pushed up (or to a lesser extent even if they are not), you are going to end up with something like the himalayas there as well. At -25 longitude and 0 latitude you have several continental plates being pushed together, you will have some widespread mountains not narrow bands, that whole region could become rugged highland or highland plateau depending on if it is still being formed or not, that will give you a highland desert.

For the revised map the fertile belt on D will be much larger, just look at earth you have green fertile land all the way to 70 degrees for at least part of the year. There are ways to change that, greenland is colder because it is isolated by water channels or you could make it high elevation like the himalayas just nearer to the poles, that will create a fertile belt on one side or the other from all the rain dropping out but the rest will be mountainous and dry. since it is continent to continent plate forming the mountains you will end up with some widespread mountains anyway.

However in case you have more freedom with background story, you could consider case where planetary rotational plane is nearly perpendicular (~ 90°) to orbital plane and facing sun with one of its poles.

Then again you could create other good reason for desert being there like ancient nuclear war or surrounding high mountain ranges which block humid air reaching specific area.

If you want get random map in easy way then I suggest you could try Civilization or some other computer game which may generate suitable map for you with minimal effort.

EDIT: Keep in mind that usually story is much more important then map and also keep in mind that your world - you can set rules. Then again, if you want my (realistic) viewpoint then area C would likely be very windy and might require some extra condition to become desert. Perhaps try curve that lower red line little more around edges of other red lines.

Not the answer you're looking for? Browse other questions tagged reality-check weather deserts .

9
Rocky desert or Sand desert - Which would appear in this scenario?
11
Resources for Climate World building
4
Are the deserts in this continent realistically placed?

8
Natural underground water distribution in a desertic continent
4
What would pressure belts look like on a world with continuous land?
9
Rocky desert or Sand desert - Which would appear in this scenario?
1
How plausible are the terrain and land-forms on my fantasy map?
2
Does my climate map work?
6
Is my topology/are my climate zones alright?
3
Help with Pressure, Winds, Precipitation and Climate Zone
4
Are the deserts in this continent realistically placed?
5
Is The Climate Map for My Alternate Earth Accurate?
3
Is my large tropical continent too dry or not dry enough?