Which are the requirements for a medieval warship to travel the high seas?

The warship is supposed to travel somewhere like Australia - South America and in some glacial waters such arctic ocean.

Could they be big with more than four masts? Is a wooden-ship like THOMAS W. LAWSON possible? How many troops could it carry and still staying sustainable?

Wooden-ships are out of the choice?

How much cannons should it carry? Are there more sophisticated artillery?

If medieval can be medieval China and extends to the 1400s, and you want big, you could use as your model the Chinese Treasure Ships. These could be described as truly bigass ships. 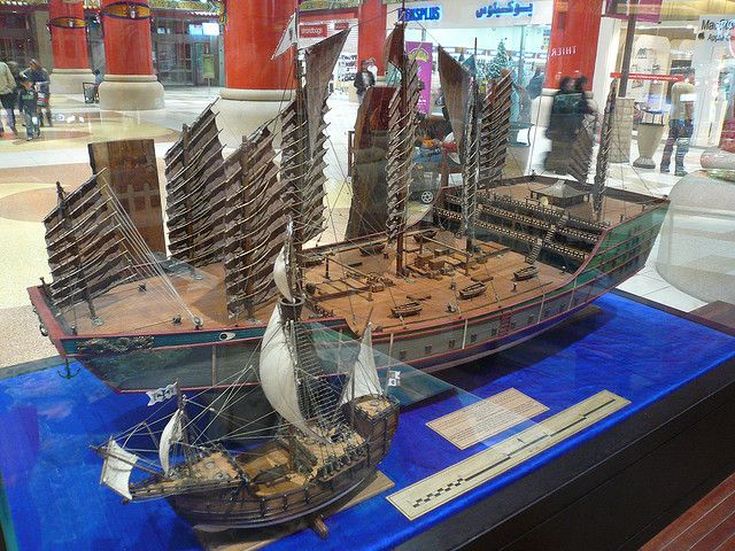 source; the Chinese ship is depicted next to what I think is a Spanish galleon.

The purported dimensions of the largest of these ships at 137 m (450 ft) long and 55 m (180 ft) wide3 would make these ships at least twice as long as the largest European ships at the end of the sixteenth century. The British scientist, historian and sinologist Joseph Needham stated in his research work Science and Civilisation in China that the ships were between 400 feet to 600 feet in length.

These ships definitely crossed open ocean. Here is a map showing the route of the Treasure Voyages 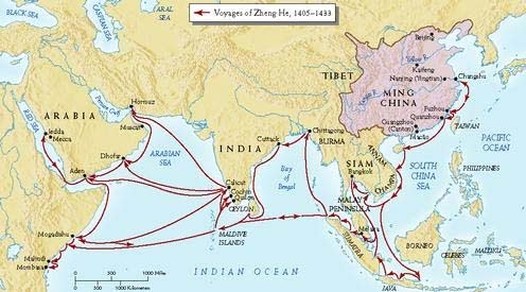 I found the map here http://www.southbaysail.com/admiral-zheng---chinas-treasure-fleet.html and there is additional information about Admiral Zheng, the tech behind these ships and so on.

I did not find specifics on the armaments carried by ships in Zheng's fleet. I know that full scale models of these ships exist in China as tourist attractions and I would expect that they would be tricked out with fake sailors and weapons, but my googling came up empty. I did find this description of the contemporaneous Chinese tower ships.

Tower ships (lou chuan); these ships have three decks equipped with bulwarks for the fighting lines, and flags and pennants flying from the masts. There are ports and openings for crossbows and lances [and at the sides there is provided felt leather to protect against fire], while (on the topmost deck) there are trebuchets for hurling stones, set up (in appropriate places). And there are also (arrangements for making) molten iron (for throwing in containers from these catapults). (The whole broadside) gives the appearance of a city wall.

By the 1400s there would also have been gunpowder bombs which could be hurled from trebuchets. I found mention that the Treasure Fleet had "gunpowder weapons" which were used only for show.

ADDENDUM: I found the Treasure Ship theme park. They put cannons on the treasure ship. With ribbons. 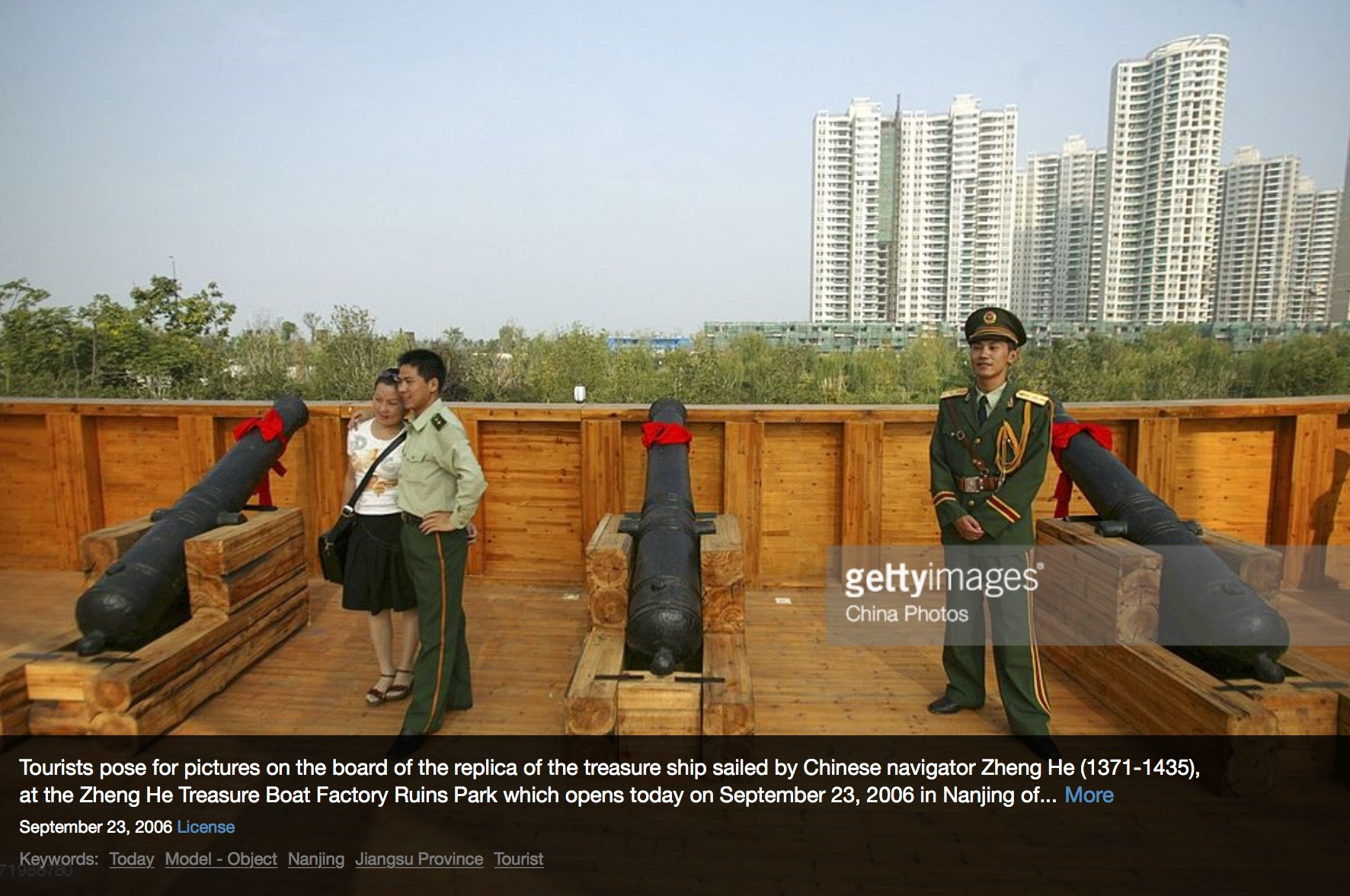 Size/Material: in fact it does not matter so much, unless you need additional thresholds on mortality or some medical constrains like "nearly-anorectic asian actress may travel too". For instance Polynesia was colonized using canoes. What really matter is the people traveling:

They need strong navigational skills (the stronger the few technology you have to help them). Read about Polynesia exploration on Wikipedia (3rd paragraph).

And they need to survive the travel, which includes physical strength (and in this case obesity counts too, like in case of samoans) and some technology like methods of preserving food or making clothes (contemporary exploration of Arctic was much easier after canned food were invented).

TL;DR: worse technology means more people will die while traveling and not travel being impossible. Mostly of cold, malnutrition or getting lost in the middle of the ocean.

For lengthy voyages, the necessary components are, self propulsion in the form of sails, some form of navigation aids so they wouldn't sail in circles (like a compass, though sun observations can be used), strong discipline in the crew to keep the ship operational, and the ability to carry enough food and especially fresh water to keep the crew sustained.

Wood was the logical choice for construction - medieval humanity didn't have any other material they could work with, that could produce a ship that could withstand a storm.

Size... the larger the ship, the larger the crew, the more food and water needed. The ships that Columbus used were fairly small - the carrack Santa Maria was 62 feet long, while the Nina and Pinta were even smaller.

Guns? Not a lot needed, because the civilizations they would run into were unlikely to have anything like a cannon. The Santa Maria carried four 90mm mortars, plus early muskets. The sound of a cannon alone would probably frighten off anyone they would run into.

In medieval times, they didn't know about dietary requirements, so a lot of long voyages lost crew to scurvy from vitamin deficiencies, and navigation aids weren't very good because where they were going was largely uncharted - they didn't know where the next land would be.

The truth is - many of those very early voyages were 'hail mary' affairs, where they sailed off, not knowing what they would find, or even if they would find anything before their food and water ran out. And there was still a strong belief that the world was flat, and they might sail 'off the edge'.

Not the answer you're looking for? Browse other questions tagged reality-check ships or ask your own question.

11
What are the requirements for an atmosphere retaining moon with a stable orbit around an Earth-like planet with non-destructive tidal forces?
2
Realistic timeframes for interstellar travel and the development of antimatter propulsion
2
What are the energy requirements of moving some of Venus' atmosphere to Mars?
6
How many crewmen and what type of ship are needed for medieval arctic travel?
30
Does my concept for light speed travel pass the "handwave test"?
6
Which Neotropical Woods are Best for Shipbuilding?
12
What are some realistic locations for a secure location high above the ground?
30
In a world where wood is scarce, what are the most important things you need wood for?
5
Realistic travel times for a horse drawn cart in a medieval empire?