Getting large amounts of water to the Australian outback

I want to build a city in the desert outback. It needs drinkable water for its citizens, what's a few different ways to get it? (pipes from coastal areas, desalination of salt lakes, etc)

What are some different ways to do this and which is the most effective and why?

This will be built in the future with effective fusion power available.

Australia actually has the largest single Artesian Basin in the world right underneath the outback. The Great Artesian Basin was what allowed Europeans to rapidly expand across the country - water would push up from the ground anywhere you dug a hole.

The major problem isn't whether there's water, it's making sure your water supply replenishes rapidly enough to be sustainable. For the GAB, it's basically a mining operation, with water flowing in and through the sandstone at a rate of 1-5 meters per year. This means that your "end product" is several thousand years old by the time it reaches you - definitely not sustainable. In fact, there are already concerns about the current rate of water removal in the basin, which is why the Great Artesian Basin Coordinating Committee (GABCC) attempts to coordinate across state lines to ensure sound practices.

So how do we solve the water flow problem?

Pipelining or shipping water requires overland travel through the outback, which is coupled with all sorts of infrastructure requirements.

Why not coordinate a country-wide effort to basically bore under the water table? The basin is estimated to be 3000 meters deep at it's deepest. That sets our "entry altitude." If we bore a series of small holes inland toward the outback that deep under water, you're basically enhancing the existing natural process anyhow. Though in densely populated areas you might have people complaining "Not In My Back Yard" (NIMBY), that's not really an issue for the sparsely populated areas we're dealing with.

Best of all, if our "pipeline" leaks, that's perfectly ok - we WANT that to happen! Obstructions aren't really an issue for us - the mere existence of a hole that sea water can intrude farther and faster into the water table is all we need. An array of these holes should aid in fixing the water-supply issues all along their route.

Ocean pressure two miles down is pretty significant. Far greater than the atmospheric pressure of the artesian basin, in fact. From this article, costal aquifers regularly interface with the ocean, and the major concern is elevation differences between the two.

Since our aquifer surface (i.e., water table) is actually BELOW sea level, the amplification factor they mention works in our favor as sea water pushes into the aquifer to equalize levels.

Or you could just wait for the sea levels to rise, so the outback becomes "infront." 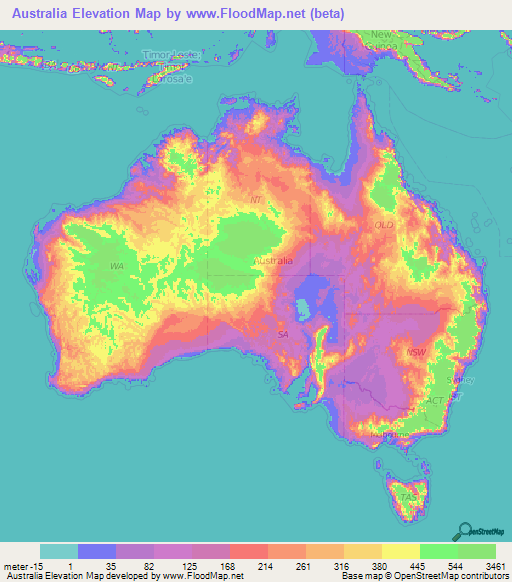 Australia has the benefit of being at low elevation. This would allow a largely gravity-fed desalination scheme.

One would excavate and concrete in an underground reservoir at your population center. This should be below sea level. Given that much of the outback is at 100 m elevation or less this will be easier than would be the case in other inland sites. One might even start with a dry lakebed that is already below sea level.

You will see Spencer Gulf at the south of Australia; Port Augusta is at the tip. Build a pipeline from the ocean there to your inlands low elevation reservoir. It will act as a siphon and water will flow of its own accord. Don't open it up yet! Your don't want salt water.

Now: install reverse osmosis filters on the ocean side. If the pressure differential is big enough (and it is, because before digging your catchment you have factored in resistance from the pipe) the water will desalinate itself before entering the pipe. Brine is left in the ocean. Hopefully currents are such in Spencer Gulf to wash the brine away. If not you might need to place the pipe entrance out to sea a ways.

Your inland residents will need to pump the water up from their tank when they need it. Windmills or solar will be fine for that.

Water reclamation should happen as with other inland arid regions, the reclaimed water either treated back to drinkability or used for irrigation / landscaping.

There have been plans to flood Lake Eyre over the years. Bring one such plan to fruition, the earlier the better. This would have the theoretical benefit of using gravity to move the water and not pumps.

Hydro power from the canal or pipes, and/or solar power to provide an energy source for desalination of seawater.

Perhaps you could also use solar updraft towers as a way to generate energy and provide small-scale agriculture, maybe supplemented by treated wastewater as a means of improving water efficiency.

The city could also have a small salt industry as a way of dealing with desalination leftovers.

Since the idea is to increase the amount of available water for habitation, we don't just want to supply the city, but the entire microclimate in order to support agriculture, lower the temperature and make the region more habitable.

So what we want to do is increase the amount of rainfall the region receives. This can be done by building giant hollow towers along the Australian coast. Solar heat causes the air inside to rapidly rise, which can be used to power wind turbines. but the main effect is to draw humid sea level air and eject it high int the atmosphere where it will form clouds. 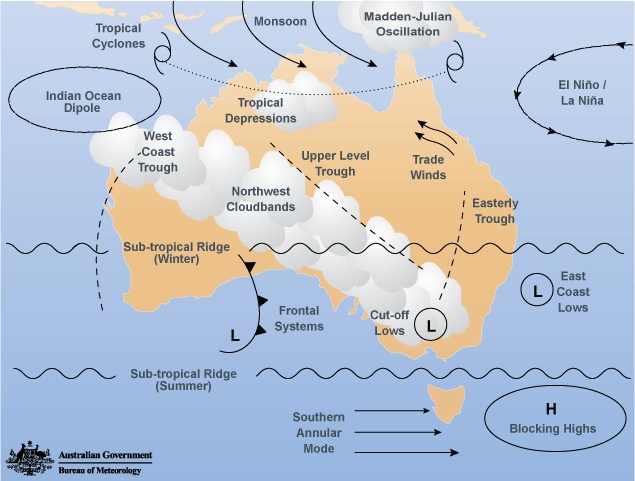 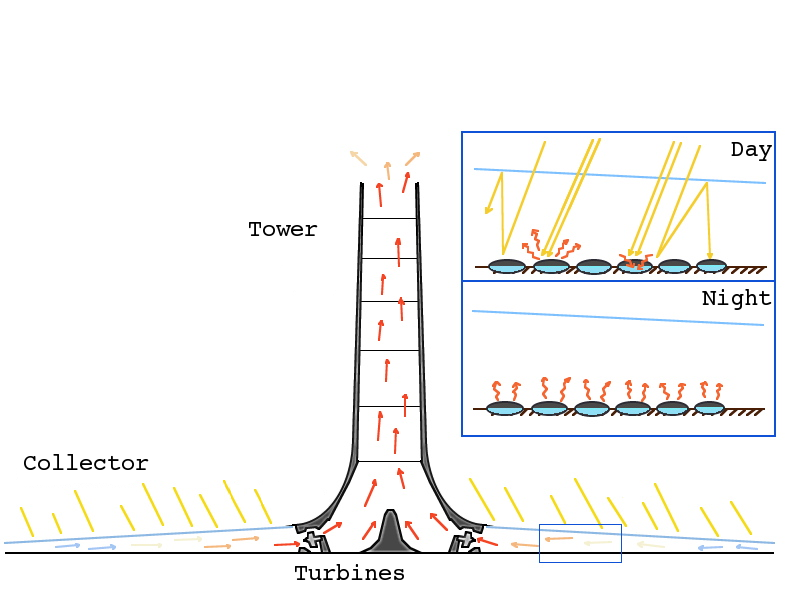 The the increase in rain will also start filling the dry lake beds and recharging the local aquifers. so this is long term terraforming for Australia, and can have benefits for the rest of the continent as well.

Since fusion power would be eventually effective, We could pump sea water from the ocean, desalinating it, and filtering out heavy water for fusion.

The remaining normal water would be given to the cities, while fusion provides the power for desalination.

I would ask - why build a city in the desert? No real reason to do that, unless maybe they were mining some particularly valuable substance. No food and no water in a desert, and it's going to cost an arm and a leg to arrange a steady suppy of both.

It's like that old Sam Kinnison line about people starving in African deserts. Don't send them food, send them luggage and bus tickets. Move to where there is food.

Having said that, there is one other way to get lots of water to a city in the desert. Since this is your world, you can arrange for a climate change that would increase rainfall substantially. Of course, if you do that, the desert would no longer be a desert.

There are ancient cities in the jungles of central America and Thailand. Why are those cities located in a dense jungle? The answer is - those areas weren't jungles when the cities were built. The climate changed to result in substantially higher rainfall and higher temperatures to support jungle growth.

Well, what is water? One Oxygen and two Hydrogen atoms? The former is quite vital for life and and a bigger concern if it were to run out (the 3 laws of survival: 3 minutes without oxygen, 3 days without water, 3 weeks without food). The later is quite literally the most common substance in the universe... you can't throw a stone without hitting something that has hydrogen contained within it... including the atmosphere. This brings to mind an old "old man" joke I heard where the old man complains "Kids today have it too easy. Back in my day, we didn't have a water faucet. If you wanted a nice cool drink of water on a hot summer day, you had to smash those hydrogen and oxygen atoms together yourself. Built character it did."

It's a fun joke, but its just that simple. You have the ingredients... you don't need to lay miles of pipe or have regular trucked in supplies of water... take some of that hydrogen that's lying around, scoop up some of that oxygen you aren't using to breath... mix in a nice big room at a rate of one oxygen to two hydrogen... at a little spark from your fusion power to the mix... keep that explosion contained, and cool to below boiling temperature... and there is your very own home made water. And if your citizens want more, well, just switch your green engines from chargeable batteries (Austrailians consider the range of a battery powered car "walking distance" anyway... not really... but ask an Aussie just how far "a little bit down the road translates into miles/km" and realize why the battery car isn't catching on much there) to a hydrogen fuel cell... and then collect the vehicles exhaust.. aka... fresh pure water.

Hope you enjoy this entry from Mastering the Art of Chemical Cooking. Bon Appetite

Not the answer you're looking for? Browse other questions tagged reality-check cities water .

5
Sea pumps to create rain using windmills to control weather?
6
Converting deserts into more hospitable places by inducing rain through the ocean?
2
Can solar energy be used to desalinate seawater in Australia?

13
How could a monarch rule in a vast, isolated, medieval city
8
City Design: Freefall
9
Space wizards city : Is it sustainable?
41
Why do people continue to live in an unfavorable location when there are significantly greener pastures?
45
Would a 100% simulated war be a way to solve national conflict?
7
The Project Sahara V2
5
What are the political outcomes of the Sahara Project?
41
A way of getting the water to the top of the tall building without electricity?
7
City defenses against kaiju attacks?