How to make a realistic 'giant'

Imagine a race of what we would call 'giants', each of them possibly around 8 to 10 feet (2.40-3.00 meters) tall. What differences would they need compared to us regular humans in order to function? I know that simply up-scaling organs doesn't work as one would expect (Not a biology major, don't hold me on that).

And if they could function reasonably well, would there be a way to make them superhumanly tough or strong? Not unreasonably so, just maybe capable of uprooting a tree?

Changing position would cause larger variations in blood pressure in the head and blood would be packed into legs. I doubt 10ft would be enough to cause huge problems, but adaptations similar to what giraffes have would exist if giants evolved naturally. This would mean larger heart and blood pressure to guarantee blood supply to the brain, valves to reduce blood pressure in the brain and prevent back flow when the head is down and tighter skin in the legs to prevent blood accumulating there. Alternately the circulatory system could have evolved to have pressure control valves for every major area allowing uniform pressure regardless of position. This would also allow giving muscles and lungs higher blood pressure while giving brain and other organs normal pressure.

Due to weight increasing faster than strength, bones and muscles would have to be proportionally thicker especially at the lower body. Legs would probably have suspensory ligaments at joints.

Giants would by necessity be muscular in order to avoid issues with legs and spine. Being large and muscular would make them quite strong. Size alone would increase strength by the square of increase in height. Adaptations for increased mass would come on top of that, although possibly simply by weak giants not existing (less variation, not higher average). A giant might (as a guess) be two to three times as strong as a large and strong normal human.

Longer limbs would also add leverage and reach. So in melee combat a giant might certainly seem impossible for normal humans to defeat. They would normally get the first strike and should be able to use their overwhelming strength to push aside shields and parries.

Longer limbs would also allow using larger bows and arrows, which generally would result in dead opponents as size of the bow allows storing (and releasing) more energy with same pull strength and a larger arrow should be more accurate and have better armor penetration. And of course the giant probably would have higher strength as well.

The need for tighter skin for legs could result in the skin being thicker and more tear resistant all over. But I don't see this making much of a difference if weapons are used. Fat and muscle would absorb more damage than with a normal human as there would be more of them, but the difference should not be dramatic.

After some thought I realised that bones and muscles are not the only things that would scale, if the same proportions were retained. Larger eyes would give more light gathering ability for better night vision and resolution would improve as well so that the giants would see as well at their arms length as normal humans at theirs. Sense of scent should also be scaled up.

Lung capacity could scale to match the need for oxygen (cubic), but the wind pipe would scale less, so the giants breathing would be much more audible and their voices would be louder. Also since the giants would have more mass generating heat in proportion to skin radiating it, they'd likely use panting for losing excess heat and possibly have a slightly higher body temperature.

The strangest question would be with the brains. If the proportions of the head remained the same the brains would be over twice the size of human brains. Considering that humans already have pretty big brains and it is hard to think need for more brain power, the giants heads might be flatter or have thicker bones to reduce brain size. The giants could have much more shock absorbing structures in their head.

Potential uses for extra brain mass are relatively easy invent, though. Many animals spend larger proportions of brain for sensory processing. The giants could have large structures for processing visual or scent data. They might have superior memory. On a world with magic the extra capacity could be reserved for magic and make the giants superior mages.

Their proportions would change slightly, with thicker bones and legs. Generally they would be wider proportionally than humans.

They would need a larger heart to keep the blood moving, probably along with adaptations to help prevent blood pooling in the legs. This could include systems similar to the way our leg muscles help lift the blood along with things like stronger veins and arteries.

If their bones and muscles were scaled up sufficiently then uprooting a small tree would certainly be possible, Personally I'd look at an elephant for inspiration. Take a look at what feats of strength are possible for an elephant and then design a humanoid with similar proportions and capabilities to the front half of an elephant.

I do not expect that scaling up to 10 feet tall would need dramatic changes physiologically speaking, although you are probably approaching the limits of reasonable scaling in humanoids.

Robert Wadlow, 8' 11" might fit your bill. The picture on wikipedia (below) makes his nearly 6 foot father look diminutive.

Of course, his untimely death points out some of the potential problems with such a large body. While the organs scaled up successfully enough, there were other health effects, such as needing leg braces to walk; and I believe I read that the difficulty of pumping blood through his feet helped to hasten the infection that killed him. So maybe not a good characteristic for a successful race, and the cause was probably not a heritable trait (gland/hormone malfunction). But it is a demonstration that such people can (and do, from time to time) exist.

Anecdotes describe him being as stronger than most adults at 9 years old and, with no end of his growth expected, he probably would have continued to gain strength and stature until some side effect became fatal. Another extremely tall man was able to lift nearly half a ton, so strength seems proportionate to stature (more on that later).

But as for a mechanism for an extra tall race, a change in pituitary gland size seems to be enough to dramatically impact the body's growth. Unfortunately such abnormally tall people often die young, as the wikipedia chart on the subject shows. A short list of health conditions:

and you can find more on Acromegaly. But some people seem to lead fairly normal lives, but with the added benefit of not needed a chair to reach the lightbulb. 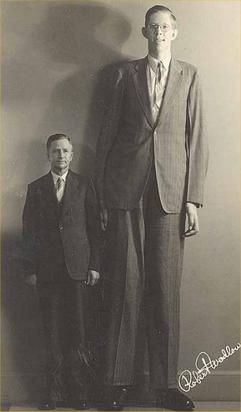 Now, as far as uprooting trees go, I was surprised to find a study discussing the exact force needed to uproot certain trees. You can find it over at the Finnish forest institute. http://www.metla.fi/silvafennica/full/sf44/sf444681.pdf

Suffice it to say that uprooting trees is extremely complex, but in general the formula for uprooting Scots Pine stumps in sandy soil is: F = 6.542 × (D^0.6369 + e^0.041189×D – 1) (if someone wants to format that better, have at it). F is the forces in thousands of Newtons and D is stump diameter in centimeters. Maybe the formula would be different for trees that have fibrous root systems, though I assume that those would be harder to uproot.

So let's take a 5" stump. Plugging the formula into google says that would require about 7000lbs.

Given that Edouard Beaupré could lift about 900lbs, 7000 seems to be a bit much. But, for comparison, the Journal of Applied Physiology has an article discussing weight lifting. They use bench press figures I believe, but they give a formula for computing weight lifted given height: weight in kilos = 120 * h^2.16 (where h is height in meters). Given this figure, a 6 foot man should be able to lift 975lbs, which is apparently accurate, as a youtube search will show. Comparing records of bench presses to clean and jerk lifts (unscientifically), it seems that lifting limits useful for pulling trees out of the ground would be about 25% lower than the figures given by the formula from the JAP, giving us 90*h^2.16.

Upshot 2: Formulas are weird. I'm under 6' tall and I know I've uprooted 1cm diameter trees. It was a lot of work, but it's possible. And I can't lift anywhere near 1500 lbs.

Upshot 3: if you're only 5 feet tall and you can press 650lbs, you might as well stop trying. Applied physiology says you've arrived.

For that height range, you don't need to go too far beyond actual humans, e.g. Andre the Giant and the tallest players in the NBA's history

Not the answer you're looking for? Browse other questions tagged science-based biology creature-design fantasy-races .

4
Would fantasy giants be possible due to the square-cube law?
1
How strong do a giant hominid's muscles and bones need to be?
26
A more powerful bow
13
Larger weapons for a larger world
20
What would be the tallest possible height for humanlike creatures in earthlike conditions?
8
Aliens selectively breed humans to be bigger. How big could they get and still look human?
6
Solutions to a Giant's Giant Problems
4
What might be an effective mode of transportation for Giants?
3
How do semi-sapient yeti/ogres live in the wild?
4
The practicality of mail armor cloaks
See more linked questions

20
The Centaur--Let's Get Real, Shall We?
1
What would be the effects on the enviroment if a Giant walked by in a world with Earth like physics?
14
What would be the psychological differences between a human and an intelligent detrivore?
4
How win a medieval war with air superiority?
6
How realistic is the Swampus?
1
Is this giant realistic?
3
Giant realistic Prototaxites like fungi in a hot climate
0
What would this giant naturally eat?