Could I manipulate gravity to make my spaceship move?

OK, let’s suppose I have a structurally sound ship—it could take a shaking—and that space debris isn’t a problem. I have access to a high level fusion reactor, which can, for all intents and purposes, output a near-unlimited amount of electrical energy.

The humans of my world have developed artificial gravity. Could they use this type of technology, combined with their massive energy source, to theoretically warp the space in front of their ship in an imitation of a large body of mass, basically creating a gravity well that consistently remains in front of the spaceship, “sucking” it forward?

About how far outside the realm of plausible physics do you think this lies?

If you could create a perpetual acceleration due to gravity using energy (matter-antimatter reactors would be better for this), it would be like falling towards a planet that is always moving away from you. This is different from the Alcubierre Warp Drive because the sip is being dragged through space. Your gravity drive might make a ship move, but it would always be at sub-light speed because the ship has mass and is moving through space. It could be done by using energy to curve spacetime, but it would take a lot of energy, and the gravity generator would have to be at the very front of the ship. If you want faster than light travel using gravity, you'll have to use an Alcubierre Warp Drive.

Manipulation of gravity is currently impossible so the plausibility of your question will largely depend on how far outside the realm of plausible physic you think it is.

Due to general relativity, it is impossible differentiate gravitation and acceleration on an object from the object's point of view so in theory if you could generate gravitation, you are generating acceleration.

Other than that, this is what you are describing if you take out all the physic mumble jumble: 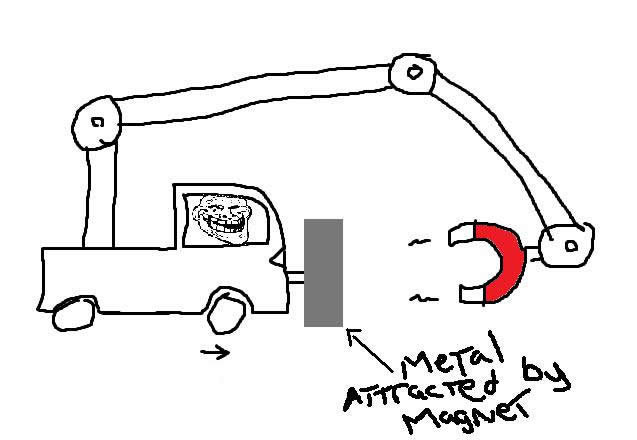 instead of magnetic pull, you are talking about gravitational pull

It's definitely outside of the realm of known physics, but it's not that far beyond how resonant cavity thrusters supposedly might work. RCTs appear to violate conservation of momentum, but might work by pushing against virtual particles to generate thrust.

Now, based on our current understanding of physics, that shouldn't work, and it shouldn't be possible to generate usable force from a vacuum, or to break the symmetry of particle formation from a vacuum.

If, however, you had a means of causing the vacuum in front of you to generate a temporary imbalance in virtual particles, those particles would have mass, in a similar way that the particles providing the thrust in and RCT gain mass. Those particles would have gravity, and as such would exert a small pull on your ship. Again, that violates the laws of physics as we currently understand them, and probably couldn't happen.

Even if that did work, though, the forces involved would be incredibly small. Gravity is a VERY weak force, and generally huge amounts of matter are required to actually create noticeable effects. Either large amounts of matter, or incredibly dense matter, would be required for any significant acceleration. Your best bet would be to cause microscopic black holes to coalesce just in front of your ship, where they'd exert a reasonably strong force for a brief moment before popping back into nothingness. Even so, this type of drive would likely be best for long voyages, where a ship could spend days or months steadily accelerating, rather than for anything requiring quick, precise acceleration.

All of that, again, is probably impossible, but it's about as close as you can get to reality for a drive that's generating gravity wells to accelerate your ship in violation of half the laws of physics.

No external fields or components are required

The combination of gravitics and ping-pong balls are all you need. Use gravitics to accelerate your ping-pong balls to the desired speed, then have them bounce off the wall. Each impact will transfer a little momentum to the ship. All you need to add is a ball return to automate reloading of the space drive.

It is awfully convenient to have magical physics.

I should also point out that physicists evaluating similar drives actually come to the conclusion that such a drive is impossible even with gravitics mostly because of violation of other laws such as conservation of energy, momentum, etc. E.g., as the ball exits the region of alter gravity, it must push against the flow to reenter normal space Sorry about the anthropomorphism.

I like to think of the propulsion issue in terms of space warping rather than gravity. It should be acceptable since warped space and gravity are interchangeable to some extent, but warped space is easier to visualize with lines. If theoretically you can generate two fields on the two ends of the spaceship, one that compresses the space and other that dilates the space, then yes, the propulsion system will work, moving the ship. This is the basic idea behind warp drives in sci-fi. Since you can warp space using gravity, voila ! you have a gravity based propulsion system.

Not the answer you're looking for? Browse other questions tagged reality-check gravity .

4
Could a manned maneuvering unit provide artificial gravity?
58
How would someone hide an asteroid in the void of space so only they could find it?
1
Could a satellite make the gravity of a planet increase?
28
How much gravity should I have on my spaceship?
42
Could a cave-in or avalanche in low gravity be dangerous?
14
Navigating storm fronts in space
3
How would colonists on Mars effectively move about with the lower gravity?