Can a galactic center be my sun?

Suppose there is a rogue planet. I was imaging what could be its energy source for life, and I remembered that photos of the center of a Galaxy look very bright. So my question is, can a galactic center be the sun of a rogue planet?

As far as we can tell, the center of each galaxy contains one, or sometimes more, supermassive black hole hundreds of thousands to billions of times more massive than our Sun. I'll use our own, Sagittarius A*, for the rest of this answer. It has a mass of roughly 4 million Suns packed into a space roughly the size of the orbit of Mercury.

While the planet could orbit the supermassive black hole, plenty of stars do, it's not a pleasant place for life. It would have an enormous accretion disk of material spiraling into the black hole, compressing, and radiating massive amounts of energy.

It's this accretion disk which glows and could provide the energy necessary to sustain life on a rogue planet. Since the amount of energy radiating from the accretion disk will change as more or less material swirls around, it's unlikely the habitable zone around the disk, if one even exists, would remain stable.

In addition, your rogue planet would have to deal with powerful and unstable magnetic fields, X-Ray bursts, and jets of material. For example, in 2015 a massive X-Ray flare was detected from Sagittarius A*, possibly from an asteroid falling into the black hole, or tangled magnetic field lines.

Even if the galactic core could be used as a power source, it is thought that life as we know it could not evolve close to the center due to the high concentration of high-mass stars that are found there. Dangerous cosmic objects like neutron stars, pulsars, and black holes roam wild near the center, and supernovas or gamma ray bursts would sterilize a planet every few million years, causing evolution to start over. Complex life would find it hard to evolve in such a hostile environment.

Signs point to no. As the answer to this Physics Stack Exchange discussion mentions, even a hundred times higher stellar density of the night sky as expected closer to the galactic center would brighten up the sky less than the full moon.

While 100 stars per cubic parsec, which seems to be the common estimate for the galactic core, is a lot (we're at less than one star per P3) it's still not very dense as I understand it. And as others have pointed out, you want to be a bit off from the supermassive black hole in the middle so at best you'd get a very exciting night sky during your eternal nights.

Many photos of extra-galactic galaxies use filters, false-coloring or are enhanced to emphasize certain features of the galaxy or combat disruptive effects such as light pollution. Examples: M42, Crab Nebula, Horsehead Nebula, and M31: Andromeda [4] [5]. If you look at software used in [5] , you'll see that the astrophotographer used stacking, masking, and photoshop to develop the final photo from a set of 44-291 photos (44 + 86 +71 + 90).

From Earth, if you travel far enough from light polluted regions, you can see the milky way galaxy center with the naked eye. (Paranal Observatory) (wallpaper) (space.com gallery).

Sol is 27,000 LY from the galactic center in the Orion–Cygnus Arm. The bulgy core of the Milky Way extends to about 10,000 LY and the 1 parsec galactic center contains 10 million stars. That being said, while it is relatively dim compared to nearby light sources with an absolute visual magnitude of −20.9* it is still a very bright object. By comparison the Sun has an absolute magnitude of +4.83 which is 20 billion times dimmer.

Note: Absolute magnitude is defined as the apparent magnitude of the object at 10 parsecs.

We Need To Go Deeper Morty!

The absolute magnitude of a galaxy is calculated differently compared to stars since galaxies are larger than 10 par secs.**

A galaxy's magnitude is defined by measuring all the light radiated over the entire object, treating that integrated brightness as the brightness of a single point-like or star-like source, and computing the magnitude of that point-like source as it would appear if observed at the standard 10 parsecs distance. source

Therefore, this may not be very reliable for the Milky Way. That being said, it is worthwhile to note that within 1 parsec of the galactic center there are 10 million stars, and that this region would be very bright since it does sit within the galactic core.

My Conclusion: it can go either way. (I'll confer with an astrophysics buddy of mine for clarification and update this answer.)

But we're not done. We've only considered the Milky Way Galaxy. What of the brightest objects in the universe?

Quasars, or quasi-stellar objects, are active galactic nuclei of obscenely high luminosity. The brightest Quasar, 3C 273 has an apparent visual magnitude of +12.9 and an absolute magnitude of −26.7 making it 4 trillion times more bright than the sun. Using the same calculation above, we find that it'll have the same brightness as the sun at 9.8 parsecs or 32 LY. The same arguments as before applies, but less strictly so.

Side note: if a civilization were to develop on a rogue planet orbiting a quasar, they'd see some fantastic jets. I'd also expect them to use the jets as a time-keeping mechanism (much as we can use the moon to keep time in Lunar Calendars).

Since your planet is rogue, you'll need to consider the following as well:

From a visual standpoint, there is a possibility of the accretion disk of the supermassive black hole at the centre of the galaxy releasing enough radiation to make a rogue planet orbiting sufficiently far enough away be lit up like the Sun. 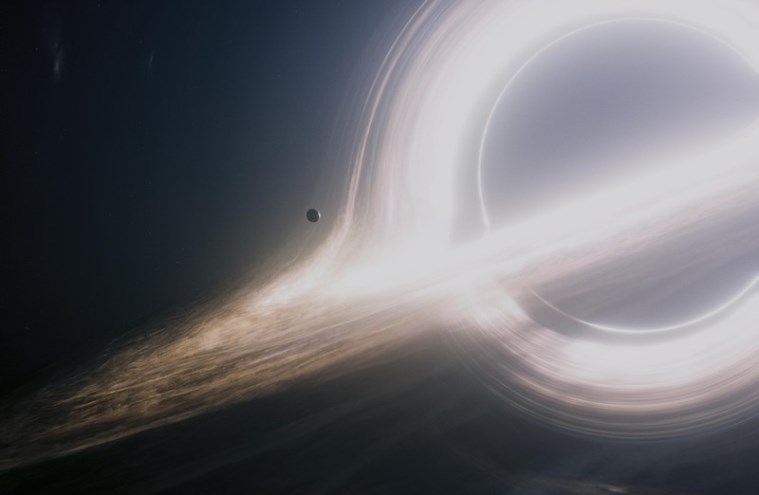 The accretion disk as portrayed in the movie "Interstellar"

Of course, as many other answers point out, visible light isn't the only sort of radiation you will be getting, and it seems very likely that visible radiation is not going to be more than a small percentage of the energy output of the accretion disk. I'm not able to find a good estimate as to how much energy is coming off the disk as light, but consider if we can see the supermassive black hole at the centre of the Milky way in frequencies from radio to x-ray from 30,000 light years away, then the radiation environment is probably sufficient to fry a planet orbiting a black hole, and possibly boil it away as it's orbit takes it closer to the centre.

The ever helpful Atomic Rockets "Boom Table" tells us that it would take:

4.5 × 10^27J 1 Et Energy required to vaporize all the oceans of Terra into the atmosphere

7.0 × 10^27J 2 Et Energy required to vaporize all the oceans of Terra and dehydrate the crust

So making some assumptions about the energy output of the central black hole gives you an idea of how far away the planet could be before the energetic output of the accretion disk destroys the planet, which in turn would tell you how many light years away it would have to be to be in the "safe" zone.

There are also dwarf galaxies out there, like this one. They don't seem to have a black hole in the middle, which makes an inhabitable planet in that region more likely. It is theorized that such galaxies may be formed around an agglomeration of dark matter instead of a supermassive black hole present in regular galaxies like Milky Way.

However, unless you're willing to imagine an unknown way in which energy required to support life could be extracted from dark matter directly, your best bet is to have a regular star in the middle of a dwarf galaxy with your rogue planet orbiting it.

There is a brilliant video called "Civilizations at the End of Time: Black Hole Farming" by Isaac Arthur: https://www.youtube.com/watch?v=Qam5BkXIEhQ It describes civilizations that could live off of energy of a supermassive black hole, but definitely not in a sense you would expect. Worth checking out.

Potentially, a sufficiently advanced civilization could also live on a planet orbiting black hole in old enough galaxy (where most of the orbits stabilized and material does not fall uncontrollably into a BH). By throwing material into accretion disk at constant rate it is probably possible to sustain consistent habitable zone. Although I don't really see the point in it for a society this advanced, they can just use artificial fusion instead.

4
How could a sentient life form move an exoplanet the mass of the Earth?
10
No sunlight, just high-energy radiation?
8
Could a planet be at the center of the universe, yet still have a sun?
31
Would life on the edge of the Sagittarius Dwarf Spheroidal Galaxy see the whole Milky Way in the night sky?
12
Can the Sun lose enough mass that Saturn's current velocity becomes escape velocity?
6
Could [life on] Earth Survive a Gamma Ray Burst?
14
What would the night sky look like for a world on the upper plane of the galaxy, near its rim?
13
Rogue Planet Illuminated by Galactic Centre
10
Sun with low emissivity?
12
What would the geologic record look like on a planet in the galactic halo?