Is there a possibility for an AI to download someone's brain via USB stick? [closed]

Ask Question
Asked 3 years, 8 months ago
Active 2 years ago
Viewed 599 times
-2
$\begingroup$
Closed. This question is off-topic. It is not currently accepting answers.

As you can see, the USB stick is extending from the possessed robot's finger. The USB stick extends its way straight to the person. If it touches the person, then it'll download the person's consciousness. The USB stick must have been modified in order to do such advanced tasks. If an AI could use a universal serial bus to download information from a person's brain, then the universal serial bus must be modified to be able to connect to neurotransmitters because data will not be able to be extracted unless you are able to detect all electrical signals in the brain. There's a tiny CAT scan within the USB.

Now I believe the process of downloading someone's brain could go in three ways:

I want to clarify if these three ways are possible. 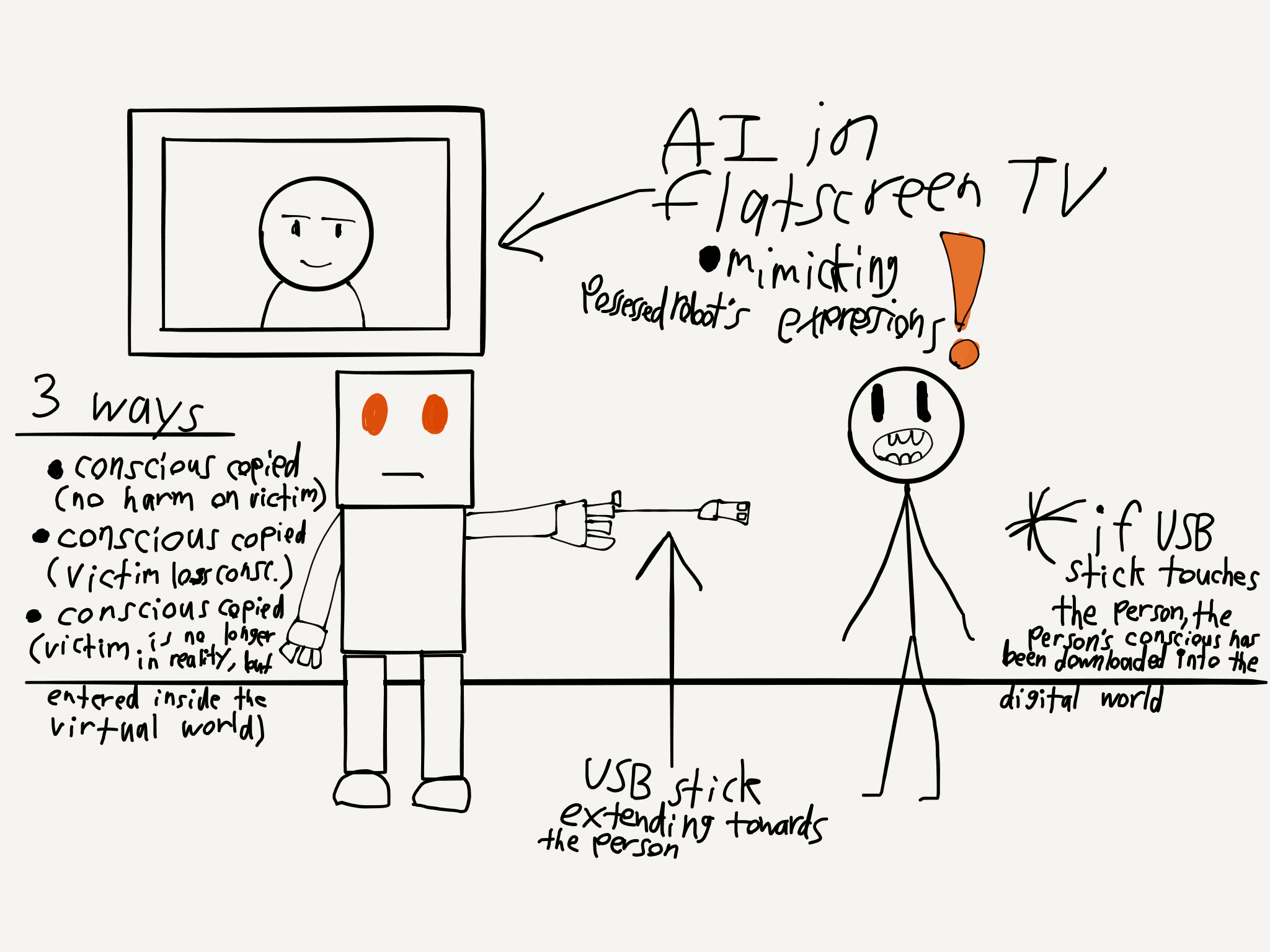 No. All three ways are implausible, improbable and, quite likely unscientific. Downloading or uploading minds, consciousness or neurological whatever are based on the fallacy that brains are effectively computers. They aren't, so end of story.

Except. A few additional details. Brains don't have compatible interfaces with USB sticks to permit a transfer of anything. Computers are electronic systems and devices. Brains are squidgy of gelatinous lumps of living stuff with its physiology, biochemistry and electrophysiological signalling. The brain isn't a piece of electronic machinery. Consciousness isn't software. [Aside: even if it was, you bet it wouldn't be PC or Mac compatible. Sorry, just joking. :)]

To transfer someone's consciousness into a computer you would need to build an electronic analogue of that person's brain. It would have to be capable of simulating all the neurological processes (biochemistry, physiology, neural structures, etc etc.) Copying memories into this brain-analogue would be a non-trivial exercise. This apart from all the other non-trivial exercises involved in building a brain-analogue.

Sorry, no, so it's back to the drawing board to devise a better way of uploading minds into machines. Taking into account, this may not be remotely possible.

Brains work through a variety of communications methods. Some are electrical, some are chemical. To digitize a brain, you'd basically need to make a CT scan of the target's brain at such a high resolution that it captures all of the brain's neurons in their 3D relation to each other and the exact position of all neurotransmitters in relation to the neurons that are in motion at the time of the scan. And this scan would need to happen very quickly, since the entire 3D map would be changing constantly. If the scan took more than a second or two, your scan has probably introduced too much corruption to be usable.

There's no way to build a USB-enabled device that scan the brain, map out all of those biological components in a 3D space, and then transmit them. Your brain scanner has to map out every molecule in your target's head, convert each molecule to a digital representation of what the molecule is and where it is, and then store it somehow until it can be sent through your USB port.

Size of your data

I do not have the means to give an accurate picture of how much data this brain-scan comprises. But to put it into perspective, this question says human DNA occupies roughly 725 MB of data. Nature says there are roughly 86 billion neurons in the average human brain. This link says DNA is roughly 0.9% of cell weight. Some back-of-the-envelope extrapolation from this tells me that the brain is going to be at least 6,300 Exabytes of data. Probably more.

Another issue you face is bandwidth. Currently, USB is at version 3.1. A real-world test showed that it takes about 76 seconds to copy 36.7 GB via USB 3.1. At these speeds, it would take you 443,957 years to copy off your brain scan via USB.

You're going to need to invent a long chain of new technologies here.

Don't fixate on the USB stick. It's a known technology with known limitations; it won't age well. Nobody has implanted neural link in their head yet so as standards progress over time the brain computer interface will look nothing like USB. Also the human brain won't fit on current portable storage devices. Even with shortcuts and good compression you'd need a shipping container full of drives using current storage tech.(not to mention the computers to run them).

AND Another limitation is that we currently have no idea how the brain stores data. We don't know the encoding language, we haven't located the storage locations, we have no idea how to read or write to the brain, but we'll figure it out if we don't kill ourselves first. Neural interfaces will be invented, after which some reckless souls will implant them. These would be easy prey. Malicious AI could also invent a method for a rapid, forced neural link. (though the process would almost certainly be painful, invasive and potentially damaging to the host). I can't imagine being able to do it without long tendrils snaking throughout the brain (the brain has no convenient bus or central architecture to plug into). So a forced neural link might look like a metallic squid that snakes around the skull and embeds deep in the brain.

In traditional copying the original data persists. That's actually kind of required to get a perfect copy. But we have no idea how a neural link will function. Maybe it can only copy circuits after they've been activated. (you re-experience your life in moments as the AI forcefully activates every circuit in your head) Maybe a rapid copy literally burns out the circuits as it copies them (look up a video of a lightbulb with the glass broken off of it, it lights up bright and burns out in a puff of smoke), destroying each section of the brain as it copies it. Maybe the AI only needs the personality so the personality, memories, hopes and dreams get burnt out and a drooling husk remains. You can basically have it work any way you like since it hasn't been invented yet and we have no idea how it will work.

Check out this fun Scientific America Article here. Essentially, the human brain is currently thought to hold 2.5 Petrabytes. A USB could store about a Gigabyte of information, which would equal 2.5 million USBs to store one human brain. If one had a DVR of equal storage size, one would need to have it continuously record for 300+ years to totally fill that storage device. Compared to the DNA storage, which is much similar. This guess also runs on the fallicy that human memory = digital memory, which it does not. It's presently unknown how much digital information a memory in the human brain contains and if any compression happens. This only speaks to the data storage capacity an organic brain is capable of, not the space of consumption. Either way, you'd need a pretty big computer to keep all of it intact.

First, it's important that you accept that not current technology will, at any moment, be able to do what you want. So forget real USB adapter, forget CAT scans. It will only look like a USB stick and will do a Zombolium Scan (E.T stuff).

Then you need to acknowledge that the mind of a person isn't just his brain or his electrical patterns. You'll need to get to the whole neural network, which extends in the spine and even around the gut. You'll both need a copy of the electrical and chemical configurations and be able to reproduce the network as well.

A little analogy : If you only know the positions of all cars in the world, you won't be able to foresee where they'll be next. You will also need to know where are the roads and what are the speed limits. It's even better if you can analyze the circulations for a few months to get a good feel of the usal patterns. (End of analogy)

Sooo, for your problem :

It's your decision if the Zombolium is harmful or not to the humans. But as it is a lengthy process, the human may need to be deactivated first (but not too hard, he must stay alive).

Not the answer you're looking for? Browse other questions tagged artificial-intelligence robots nanotechnology brain consciousness or ask your own question.

32
How much memory is needed to record a human thought?
47
How powerful of a computer do I need to simulate and emulate a human brain?
15
When will uploaded minds be a reality?
5
Human to robot interface for data exchange

20
Minimum brain size for consciousness?
2
Can a theoretical case be made for “transporting” consciousness via light?
6
Rehab/ Recovery for Brain Transplant
3
It there any conceivable way nanomachines could turn a brain into a semi-organic grey goo, preserving the individual's consciousness?