In my fantasy world, Takeover Creania, I have three gods that control the elements and thus its lush magical power:

My overall plan for this magic system is this, each one of these gods divided the people of this world into thirds, but after many of war, you (the main character or avatar) begin this adventure in a new time of peace. Each one of the Three Main Elements combines to form the "Triangle of 10 Elements." Imagine a triangle of 10 dots with the elements of Fire (red), Lightning (yellow), and Ice (blue) each representing one point of this triangle.

My major problem is this, I can't for the life of me come up with the 6 (or 7) other elements that must go into this triangle.

There are three races of this fantasy world that were created when the 3 Gods divided the human race, each one represents that one main element of their god. Once there was a time when the three races couldn't interbreed, but since now peace has come to rein, these three elements have come into being (based off of the dominant and recessive genes of their parents of course).

Triangle Center (black, gray, or white?) - Nothingness/Air, the fourth god, the god that was destroyed before it was born, blinded by hatred and chaos, this magic can be used the humans regularly, but under strict authority guidance.

Now do you see my problem? The three main elements based off types of energy, heat, motion, and coldness, so I don't really know how to mix properly. I need some serious help on this one, please.

I don't like these combinations at all, something doesn't seem right, I've based them off of the colors alone, that's why I need help, it needs to be more scientific or more energy-based, but I also need a complete range of elemental magic for this fantasy world of mine (like earth and poison maybe).

Please and Thank You!

From http://www.guildcompanion.com/scrolls/1999/oct/etherealvisions2.html which I think is Dungeons and Dragons inspired.

I post this because of the interfaces and how they have considered them. A good inspiration.

Here is my own rendition of your pyramid. I kept the names of your divinities and their colors. The colors in between are 2/3 one and 1/3 the other except for the center Earth, which is equally all 3 and so is brown. 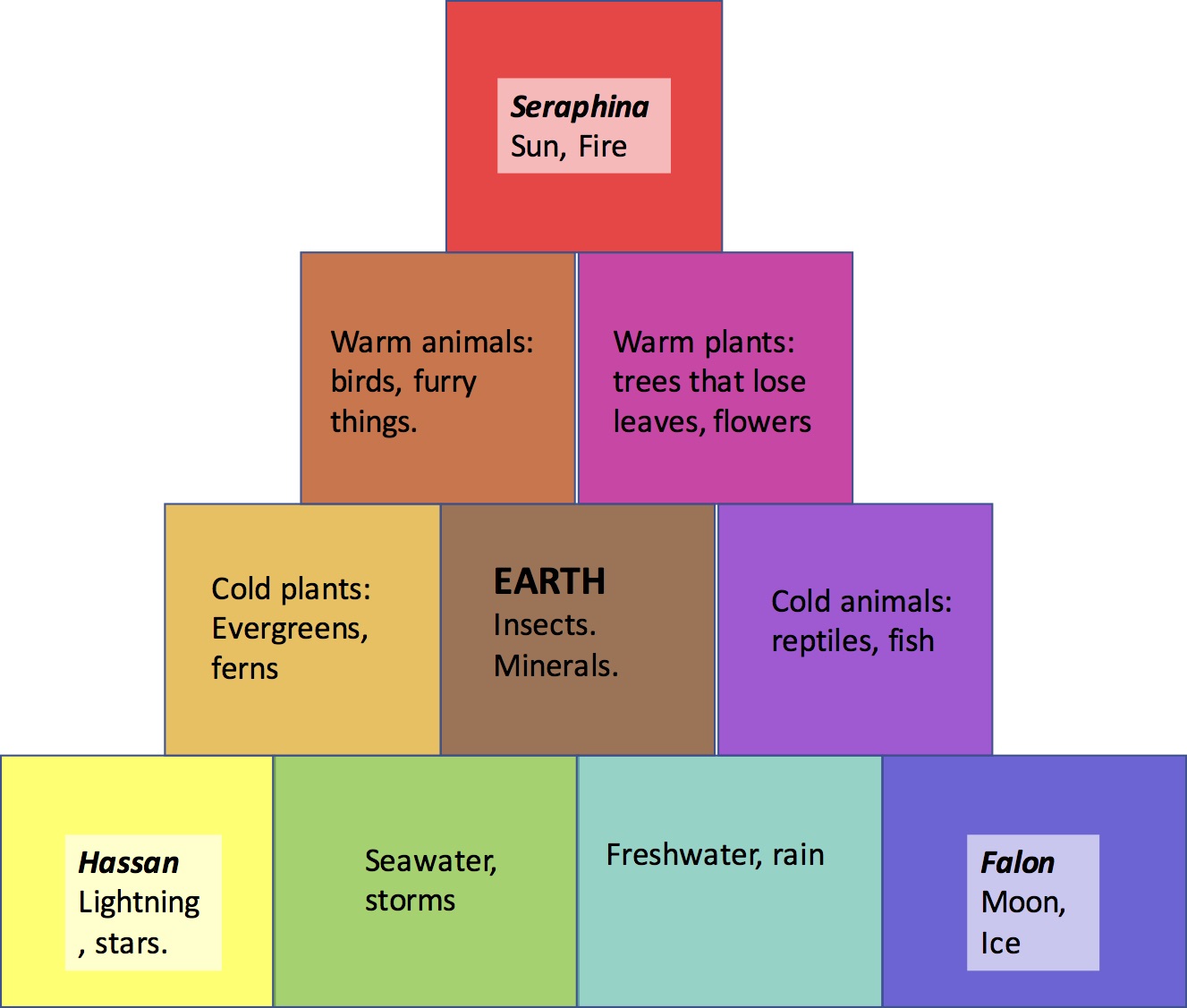 The bottom row is from the OP. We (my assistant Gwen and I!) used living things for the middle of the pyramid. For one there is a lack of celestial things to fill that in (rainbows? fog?) and for two living things give energy to the story. Considering plants as two categories was kind of neat I thought.

The center one Earth needs to play a role in your story. Traditional element systems have 4 or 6 elements. Earth being equal parts each should be represented by a divinity as well. This entity might show up partway through your story and would add energy. Maybe it is a child. How can you have a child of 3 entities? Read some Indian mythology and open your mind to different kinds of conceptions.

To summarize, you have:

The pairings of celestial bodies to elements makes the most sense for the sun and the moon. The connection between stars and lightning is more tenuous - after all, the sun is just another star. You might consider adding other planetary bodies:

Your elements (fire, lightning, and ice) are a mix of:

Some other important physical and chemical phenomena you might incorporate are:

Hope this gives you some ideas.

There are tons of elemental possibilities. The standard physical elements (in opposed pairs): Fire <-> Ice; Lightning <-> Water; Air <-> Earth; Light <-> Dark (gravity/shadow); Plant <-> Metal. Though some times some of these are subordinate elements.

Then there are nonphysical elements, Life, Death, Space, Time, Thought, Spirit, Void. Life and Death are generally an opposed pair, but the rest are generally stand alone.

By excluding Earth you limit your triangle, you limit yourself and run into problems. Personally, I would do Fire, Water and Earth as the points (Fire for the Sun, Earth for the Moon, and Water for the stars).

The sides would be:

Water -> Ice -> Lightning -> Fire (Taking fire out of Water makes it Ice, and Lightning is Fire that falls in a storm)

Then in the middle have one of the others (Air, Life, Death, Spirit and Void could all work well).

This is to better explain what the three gods are all about in this world.

Consider instead the sun, moon, and space (spacing being drawn as stars since it is hard to draw nothing)

This separates your big three while creating a more "pure" effect for the gods and it makes life special by balancing all the elements and thus requiring all the gods. You could even say the impure elements contain minute amounts of the third, or say they are not discrete separations but a triangular continuum, so they blur into each other at the edges. So for instance fire and sound are not completely distinct but points on a spectrum.

Reasoning for each impure element is thus:

Not the answer you're looking for? Browse other questions tagged magic law gods classical-elements or ask your own question.

0
How would you explain magic with eclectic connections between effects, colors and inter-magic interactions?
6
A corrupted religion
52
How can humans be important enough to be the deciding factor in the war between gods?
9
Would the disappearance of gods, make an apocalypse?
5
Elemental magic - which is strong against which?
4
How to Represent Platonic Solids in 2D Magic Circle Construction