What would an organ linking the nervous systems of two people look like?

Image people with roughly the same brain and nervous system layout as a human as a first approximation using the same kinds of cells and chemicals, etc.

These connections are used to share concepts from brain to brain directly (e.g. an image of someone or something, or an emotion) a la the Vulcan mind meld or contact based telepathy, without using language.

Where would it make the most sense to put such an organ? What would it look like? Are there any precedents for this in the natural world?

I can imagine one scenario in which each person has both a "male" and a "female" organ like a computer cable with the male organ carrying outgoing nervous system messages that are received by the female organs, another scenario in which each person has either a male or a female organ that can be linked together carrying messages each way, and another in which the contact organ is neither male nor female a bit like an induction plate.

If I understand what you are looking for, the movie Avatar featured an organ with a purpose, if not identical, at least similar to this.

I imagine this organ could protrude out of any location of the body, but I would recommend near the brain.

This would allow messages to be sent from the brain to whatever is receiving it and possibly allow these beings to command creatures simply by connecting these organs (assuming the creature has one). That kind of dominance ability is a figurative shot in the dark and needs to be researched if you're doing a hard-science world however.

A forethought - this kind of evolution is rife with potential problems. Looking at male genitalia for reference, it's quite a balancing act to maximise thermal efficiency on an external organ. In your case you need to transmit information, which is arguably an easier task, but nonetheless a challenge.

The most straightforward solution to me would be to make use of existing infrastructure. 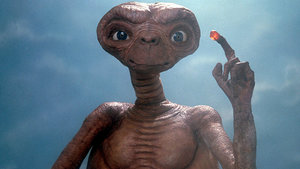 Having your organ occupy the tip of a finger has the following advantages:

Additionally, if the species were really clever with their evolution, they could incorporate their "finger ports" into retractable claws.

This would provide additional protection against undesired contacts, which is one of the notable downsides of having your organ be on the tip of a finger.

The first thing that comes to my mind is radio. A radio could be pretty low-profile. You'd run the antenna, made out of some kind of organically-growable conductor like melanin (which humans already produce for other purposes) or iron crystals, etc., down the spine, parallel to the spinal cord, and power it with a thin layer of electric organs also running down the spine (similar to those of an electric eel, for example).

If you want it to require physical contact, though, then the best option is probably something that allows direct chemical communication between nerves from each person's nervous system, using neurotransmitters just like communication between nerves in the same body. You're going to want a lot of surface area so that you can match up a large number of parallel nerve endings. It's probably completely impractical to expect that you can accurately line up a sufficiently large number of nerve endings between two people exactly the same way every time, so there's going to need to be a good deal of processing that goes on an initiating contact to figure out what kind of information is coming in on which nerves, and you'll want to minimize the burden of adjustment and renegotiation, so you'll also want something that has a lot of friction to resist nerve endings sliding out of place once the interface is engaged. Fortunately, those two constraints complement each other nicely.

The interface will also need to be damp, so that there is an aqueous environment for neurotransmitters to diffuse through. And it would be very sensitive and easy to damage, so it'll need to be kept carefully protected when not in use. Between those two constraints, that means you're really not going to want to, say, build it into the hands or fingers.

There is limited precedent for this kind of thing in chemical communication between plant roots, or mycorrhizal networks.

The obvious solution is to use modified sexual organs! There's already a ton of nerves going to those areas, and an aqueous environment, and we're already pretty good at keeping them protected when not in use. They'd just need some physical modifications to ensure that nothing moves once engaged- a problem which many organisms have solved for completely unrelated reasons.

Of course, that approach has some major downsides, as well, like only being able to interface between people of complementary sex.

The best solution is probably something remarkably like the tentacle organs of the Na'vi, from the film Avatar. You've got a literal biological cable coming out the back of the back of the head or the neck, connecting directly to the brain. At the end, there's a retractable sheath which protects a bundle of tendrils, each of which has thousands of smaller cilia, which can intertwine with another person's tendrils to form a high-surface area, high-friction interface which is nevertheless easy to disengage when you want to, and there are no distinct "male" or "female" components so there's only one set of equipment that growing and protecting and anybody can interface with anybody else.

I think "optoelectronics" may work: a sensor comparable to what we have in the eyes for reception, and some analog of organic LED for transmission. If one pair is too slow, it may be a more complex organ with many of them, and analog levels can be used rather than just "on" and "off". A human eye has about 120 million rods that do not sense the color but likely can differentiate the intensity of light. Assuming they can sense 256 shades of gray (8 bits) and register changes 80 times per second (that they likely can do), we get the transfer speed of about 80 gigabytes per second, well above the Thunderbolt 3 (40 gigabytes/s) and likely sufficient for the "distributed thinking". It may be that much less is enough for abstract thinking and complex feelings.

Using just light as the mean of communication would allow to have the both sides of connector dry, isolating and relatively robust. It would not require exposing or even connecting the body liquids that is a huge risk of infection. Also in electronics, optocoupling is used when there is a risk to pass potentially damaging voltages or currents via normal electric connection.

I think the organ may look something like horns, for instance, with transparent fibres of biological origin inside. The connection would be established by touching the horns in precisely defined points, so that the optical path joins. Only transmitter and receiver need to consist of living cells. These organs can be inside the skull at the base of the horns.

Not the answer you're looking for? Browse other questions tagged science-based biology xenobiology telepathy or ask your own question.

7
What similarities could I expect to find across alien nervous systems?
15
What would a Collective Consciousness look like?
13
What would be the psychological differences between a human and an intelligent detrivore?
14
What would a hexapodal skeleton look like?
9
What Would the Third Kind of Angiosperm Look Like?