Shark vs. Sea Turtle--Who Has the Better Odds of Being Whale-Sized Planktivores?

In a hibernating speculative evolution project called The Speculative Dinosaur Project, the "speccers" feature a species of shark called Jasconius pelaganax, the Gigamouth, which is basically a megamouth the size of a Blue Whale.

Want visual proof? Here it is:

However, it is stated in the article that

with a skeleton composed of cartilage rather than bone, and with much smaller fat reserves, the shark is probably substantially lighter than a comparably sized whale. In one of nature’s biggest ironies, while Spec may be a world filled with giants, the greatest animal of all time is from the other timeline.

In another alternate Earth, there is another whale-sized filter-feeder, but this time, the candidate is a dermochelyid sea turtle. Considering that dermochelyids (leatherbacks) feast on soft-bodied jellyfish, it shouldn't be much of a stretch for a whale-sized sea turtle to suck up plankton.

These two candidates are, of course, fiction, but how "fictional" could either scenario be? Does either candidate have what it takes to be the size of a blue whale? Or do both have biological limitations that would make this impossible?

Considering water-dwelling filter feeders: there are 2 methods. One uses gill rakers and capitalizes on the one way path for incoming water to stream past the gill rakers (where food particles lodge) and out through the gills. Lots of fish large and small use this method. The largest are the basking shark at 8 meters and the whale shark at 12 meters. Leedicthys is the largest fish to have ever lived at 22 m and also a filter feeder. I could not tell if it was thought to be a cartilaginous fish like sharks and rays or a primitive bony fish. One thing the cartilaginous filter feeders have in common is that they open their mouths wide. Which makes sense. Here are images of a basking shark and a whale shark.

So the shark with the early lead, given that blue whales are about 26 m and Leedicthys is close.

We will get to turtles. But next whales. Turtles are like whales in that they do not have gills and so water cannot take a 1 way path through the food capturing sieve, which is whales is baleen. Baleen whales must expand their necks to capture the incoming water, then expel it through the baleen. Then I think they lick the food off the inside edge. Depicted is a Bryde's whale demonstrating this principle.
from http://www.alertdiver.com/Shooter-Doug-Perrine 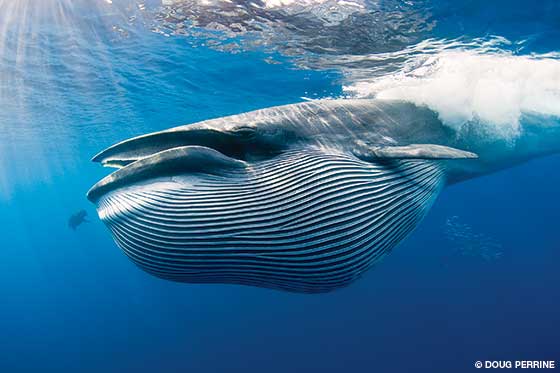 Whales can have "necks" that extend for a large percentage of the body length. I here assert that this is why baleen whales are so big - all of them. Gill rakers work for herring and for whale sharks - size is not an issue. A whale shark gets decreasing benefit with increased size over a certain point because incoming water must be rammed through the mouth and out the gills. But the more water a baleen whale can hold the more food it gets, and the bigger you are the bigger your neck can be.

In fact this makes you wonder about the evolutionary hurdle for baleen. The whales were able to do it so I suppose turtles might too. I wonder, though, about the intermediate steps on the way to baleen.

The turtle will have trouble here. A big turtle is OK, especially if the shell has reverted to noncontinuous bone, Archelon style. But the neck stops at the shell, and the shell is not expansible. The ability of the neck to serve as a water reservoir is limited by the presence off the shell in the way a whale neck is not.

The only way around this for the turtle is for the neck to get hella long. There exist long necked turtles: here is one, trying to persuade you it could be a filter feeder. From https://www.youtube.com/watch?v=VEAvxpq4J5E 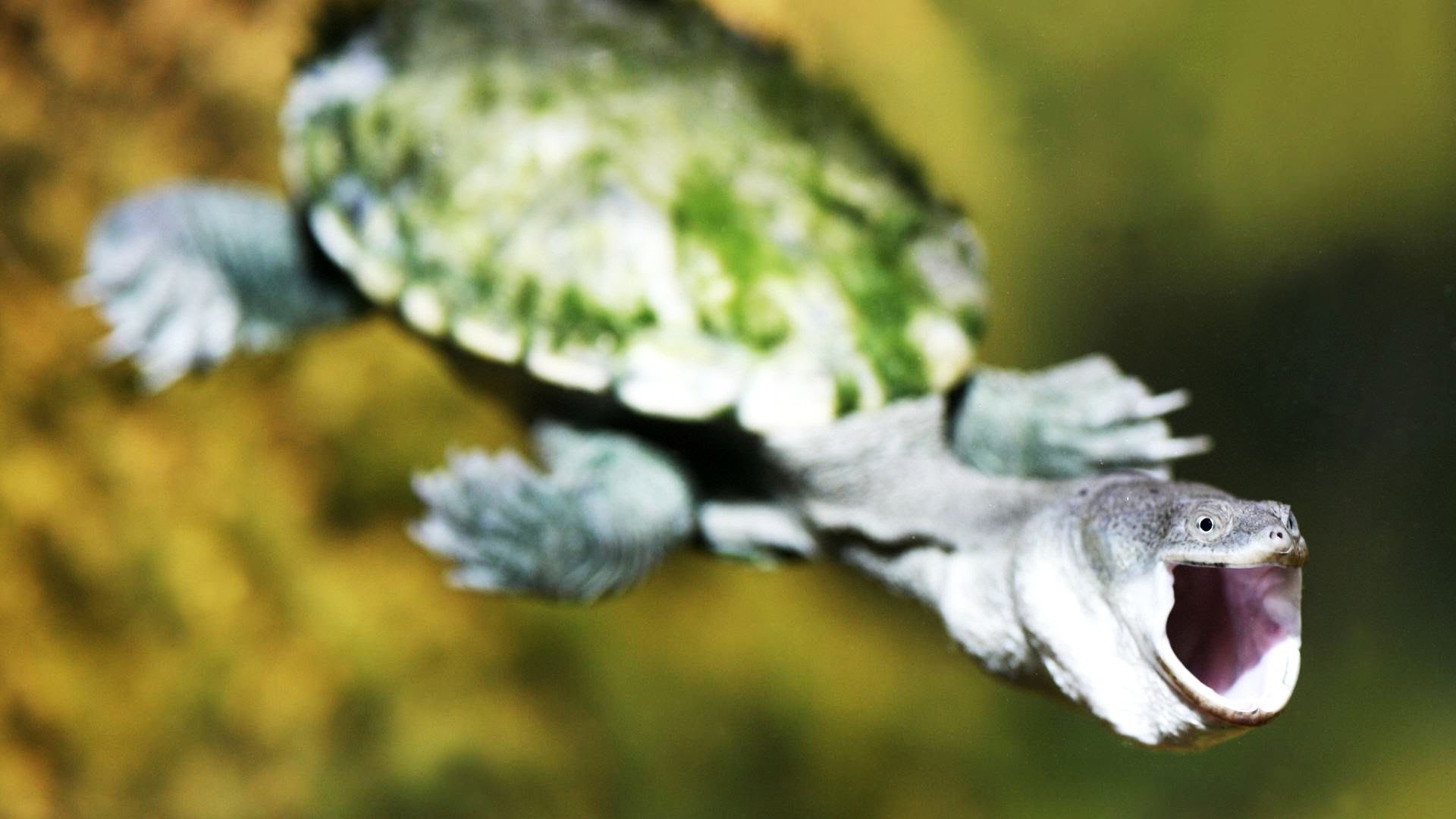 So the turtle filter feeder would have a very long, expansile, snakelike neck. Such a neck could not come back into the shell any more. As you scale up the neck to whale-like proportions, the shell would have to recede to a vestigial sort of thing.

I think these would be high evolutionary hurdles for the turtle. Shells of some sort are the sine qua non for turtles and I am aware of none, extant or extinct, with vestigial shells. I think once a turtle loses its shell it is at a competitive disadvantage with other things that are used to going without the shell, like everything else. But: not impossible. If turtles were taken back and dropped into the Ordovician so as to get a jump start on jawed fish, they might radiate out to fill the giant filter feeder niche.

Last piece: following this thought mode one would predict the existence at one time of giant reptiles which adopted the expansile throat method of filter feeding. An animal like a ichthyosaur is an air breather too, and shell-less so not limited in the way of a turtle. I did not know of any such animal but a google turned up this. http://news.nationalgeographic.com/2016/11/elizabeth-nicholls-explorer-moments-finding-a-220-millon-year-old-giant-reptile-in-Canada/ One species of the giant filter feeding ichthyosaur Shonisaurus was 22 meters long. I bet they had expansile throats too.

Dailey if you consider this a work of fanfiction... guilty as charged!

Absence of evidence is not strong evidence of absence, but I would say that the facts that we have at hand are weighted in favor of sharks: we already have filter feeding sharks, if not blue whale-sized sharks, but we have neither in the case of turtles.

Not the answer you're looking for? Browse other questions tagged science-based reality-check biology sea-creatures or ask your own question.

3
How Would a Filter-Feeding Marine Turtle Feed?

5
Which will survive better, a duck-sized horse or a horse-sized duck? What about the other creatures in this magical world?
16
What would be the traits of a humanoid being who would live more comfortably in modern society?
14
What is the minimum required technology to reanimate someone who has been cryogenically frozen?
0
What could be a plausible scientific explanation for a man who has skin made from rock and can manipulate the molecular structure of natural minerals?