Why do dwarves usually live in mountains?

This is as much a question as it is a thought that I've had. You see, folding mountains (as in made by tectonic plates movement) are very poor in heavy minerals like metals, and they seem to be the ones we most often see dwarves.

It is probably because of the Hephaestus myth and the "volcano as a forge" kind of thought that this aesthetic set off, but I seem to remember many stories where it was not a volcano but a regular mountain.

To me it would seem fun to explore other possibilities, like a mine in the middle of the desert and all that that would mean in terms of food/water supply and caravans routes. Some good stuff that you don't see a lot in the usual medieval European fantasy. Open-pit mining is also a thing.

So, just a few thoughts about Dwarves and Mines. Please correct any mistakes.

Hephaistos (or, as the Romans would have written his name, Hephaestus) of the Greeks and Vulcan of the Romans were metal-working gods. Hephaestus was said to be rather ugly, and lame in a leg; but they were not dwarfs by any measure. (Hephaestus managed to arrange it so that, although ugly and lame, he ended up married to Aphrodite, lucky god as he was.) 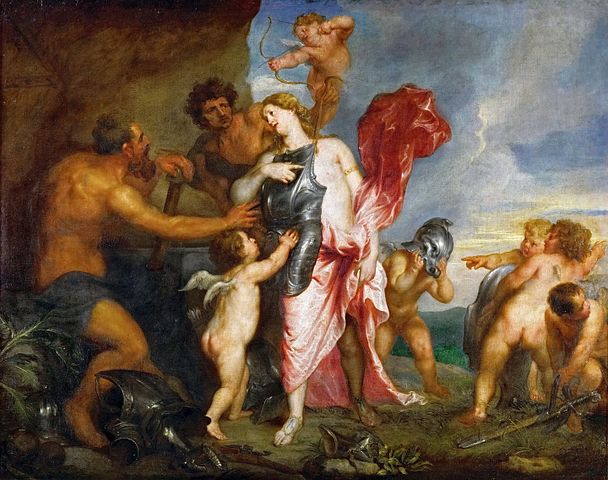 Hephaestus giving the arms of Achilles to Thetis by Anthony van Dyck (17th century) on Wikipedia.

The dwarfs of fantasy novels are modeled after the dwarfs of western European folklore, mostly of Germanic origin, and those dwarfs are miners and hoarders of treasure; for example, the dwarf Alberich from whom Siegfried stole the Nibelung treasure. (In Wagner's opera cycle, the Nibelungs themselves are dwarfs.)

For example, in central Europe there are the Ore Mountains, which have the richest silver deposits in Europe, and which have been mined since the middle of the 3rd millennium before the common era; there, in Joachimsthal, beginning in the 16th century, were minted the well-known silver coins named joachimsthalers, a name first shortened to thaler and later mangled into dollar; there, in the 16th century, Georgius Agricola wrote his famous book De re metallica, the first serious book about mining and minerals written after the fall of the classical civilization. A very good place for a tribe of dwarfs mining precious metals, isn't it?

Mountains are much more defensible than plains or hills. It only makes sense that dwarves would build their fortified cities in the mountains and then if there is a lack of minerals at the city site (and really, who wants to live in a mining site) go down to the foothills to mine.

Also it's probably easier to carve your huge halls and gigantic statues out of a big mountain than to dig through the silt on the plains down to the bedrock.

In our own world, native populations that live in high altitudes tend to be of short stature. This is an adaptation since a shorter height leads to reduced surface area for heat loss. Of course, this only answers the inverse of this question, which would be "Why do people who are native to mountains tend to be dwarves slightly short?". Still, if we believe natural selection to be a thing in fantasy worlds, then this would at least somewhat explain why mountain races tend to be Dwarves.

The reputation of dwarves for metal-working is vastly overrated. If not unjustifiable, because it's what's traded the farthest. If you actually go near dwarven regions, you find they are also noted for their wood carving, and their cheeses. There are many accounts of how they were forced into the mountains by giants, for their defensive superiority, but they adapted so well they do not want to leave.

They practice transhumance, although they bring the animals into the caves and feed them hay during the winter. They raise crops. They live outside in wooden houses. They are also noted for their mercenary forces, which contributes to their metal working reputation, because they make their own and make them very well.

Dwarves are well-adapted for mining Ores occur in seams, many of which are a thinnish layer between layers of non-productive rock. It is not a coincidence that pit-ponies were a small tough breed and short in stature. When mining you don't want to burrow through solid rock if you can help it and so the height is determined for you by the geology. Over generations, shorter people will be selected for.

You can see from the following picture that shorter people would be much more at home in these conditions. 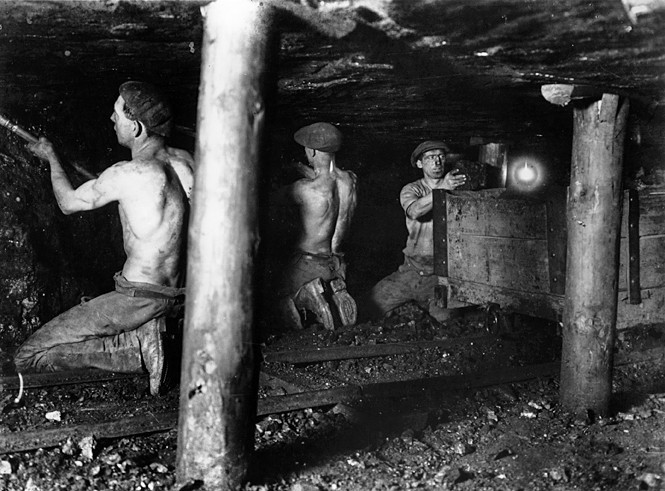 Why in mountains? Because access to seams is much easier on a fault line where an upraising or erosion has exposed the ores at the surface. Here's an example 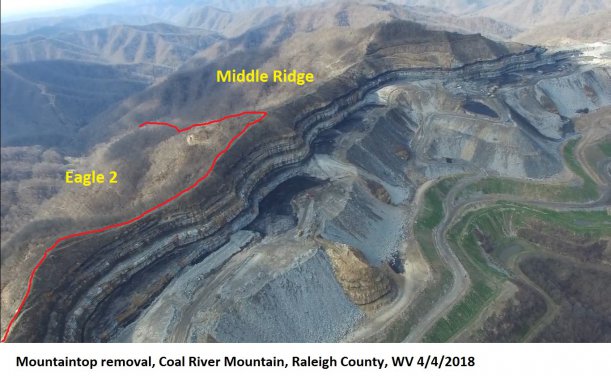 Caverns occur naturally. Now and again the dwarven burrowings will uncover such a place. When their underground kingdom is established they can start to carve and build in a more artistic fashion.

Because dwarves love to mine.

We are talking about a low technology situation--pumping water out of a mine will be exceedingly hard, especially since you can't suck water up very far--you have to bring your pump power down the mineshaft.

Thus dwarves will make mines that self-drain--dig sideways, not down.

Well maybe your Dwarves sunburn very easily. In which case they would want to stick to dark areas. Underground and when they had to go above, then they could take advantage of the massive shadows of mountains to reduce light levels hitting them(or you know, just become nocturnal) Bring in the Vampire Dwarves!

You see, folding mountains (as in made by tectonic plates movement) are very poor in heavy minerals like metals, and they seem to be the ones we most often see dwarves.

You got it the other way around. The world was initially flat. The ancestors of the modern homo Hortorum decus (i.e.: dwarf) dug most of the surface. The dwarves you see are digging up the last leftovers of an ancient layer of rock and dirt. When they are done, the dwarves of the future will dig up the next layer.

And if you are curious about where all that rock and dirt went...

Not the answer you're looking for? Browse other questions tagged geology fantasy-races mines .

5
The Desert of Ore, how would people live in it
28
Why might dwarves be black skinned in a medieval fantasy world?
8
Would mountains made of diamond erode?
2
Justifying Short Surface Dwarves?
7
A world without mountains
2
Realistic placements of Mountains and the like
10
Moving mountains
19
How deep could dwarves actually delve?
10
How to make drooping mountains?