What is the range of lava/magma viscosity on exoplanets; what conditions would have the least viscous lava lakes?

On planets of have different temperatures, conditions and chemical makeup of the lava/magma, what would be the least viscous lava around?

(Relevant to an earlier question - What would an efficient swimming creature in magma be like?)

This one is pretty self-explanatory, since the hotter the temperature, the less solid almost all materials tend to be. Also, from the Wikipedia page on lava compositions:

Basically, even for viscous materials, heat tends to destroy any bonds between the molecules, allowing them to slide past each other more easily, and making the liquid less viscous.

Viscosity can be defined as "resistance in the flow of a liquid." Therefore, materials with molecules that:

tend to have a harder time flowing past each other, and thus are more viscous. Some examples of real-life lava materials, in order of decreasing viscosity (again from this wikipedia page):

If you are looking to make a lava lake that creatures can plausibly swim through, a mixture of super high temperatures and compositions of iron and magnesium will most likely yield the best results.

There are a lot of ways to classify rocks, but the relevant classification axis in this case is the TAS diagram. 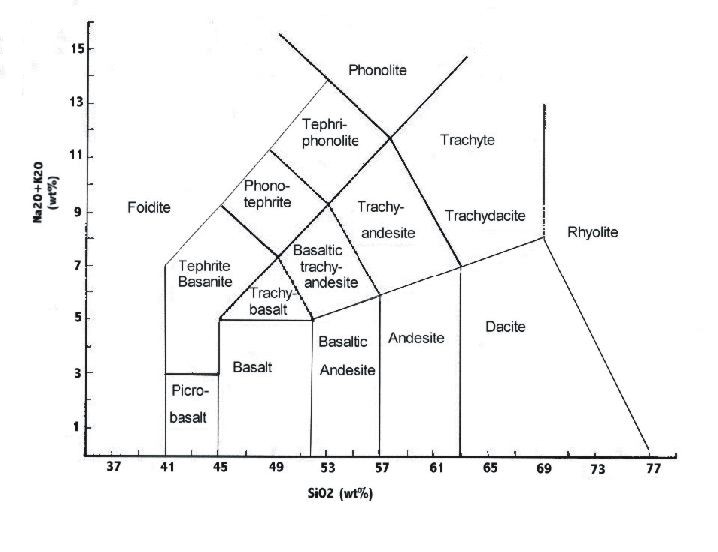 To make this more complex, there are the terms mafic and felsic. Mafic rocks are rich in iron and magnesium, often in the form of olivine, while felsic rocks are richer in feldspar and quartz. As a result, felsic rocks have more silica. Low viscocity rocks will be mafic or ultramafic rocks with silica ontent below 45%.

Going back to the chart, in order of increasing viscosity among common igneous (volcanic), extrusive (rocks that erupted from the Earth's surface) we would get basalt, andesite, dacite, then rhyolite. So basalt is the least viscous of the common lavas, as well as being one of the most common.

However, to get really free flowing lava, you would want ultramafic picrite basalt or foidolite. Picrite basalt has a high concentration of olivine, and has been found coming out of volcanoes on Hawaii island, Curacao, and Reunion. Foidolite minerals are rare, but an example of a foidolite mineral would be afghanite. This was found in the Pamir mountains of (you guessed it) Afghanistan, and probably formed during the vulcanism that raised those mountains. It has only a 1/3 silica content (much of its silica is aluminized) and a cool blue color when it cools and hardens. Check out the various feldspathoids for other options for your volcanic minerals.

In addition to Jan's answer, we have the rare Carbonatite lavas - molten carbonates formed by phase separation from very carbon dioxide rich melts. These have very low temperatures (for lava), and very low viscosities.

There are also the komatiite lavas, with extreme temperatures and low viscosities; as per Jan's answer, these are very rich in magnesium, low in silica and hence of low viscosity.

If you want a creature to swim in lava, these are the ones to go for.

Not the answer you're looking for? Browse other questions tagged planets geology chemistry temperature lava or ask your own question.

34
What would an efficient swimming creature in magma be like?

24
What effect would liquid sulfur oceans, sulfur dioxide in the atmosphere have on visibility, sound propagation and other environmental information?
2
What would be the conditions and causes that would make a planet not spherical?
2
Could a geothermal plant work for several millennia
4
Feasibility of lava beings?
10
Walking across lava
2
Would the Flamebreaker Armor in “The Legend of Zelda: Breath of the Wild” work?
6
What is the crust of a habitable planet with Io-like heat-pipe tectonics made of?
6
What would a video game lava level be like in real life?
5
What substance would make a good lava ocean?