Scientific Accuracy - How could Homo Sapiens effectively communicate with this aquatic alien?

I have designed an alien species similar to octopi (Tetrapus Sapiens) who live in the tropical waters of a fertile, lush world known as Iridia. The octopi (more like tetrapi) have moved past the hunter-gatherer stage of technology and are currently at a technological level similar to the first Mesopotamian civilisations or ancient Egypt, having devised a writing system of carving, similar to early human civilisations. They have mediocre knowledge of mathematics and science, having devised many diverse languages. Their IQ is 92 (human average 100) yet their EQ is much lower at 73. 'Oral' communication is achieved through colour change, just like cephalopods here on Earth. Tetrapi are highly fond of universal education and discrimination is minimal. Technological progress is relatively fast as they simply cannot understand the concept of strict religious adherence, although they do worship a 'mother' goddess. They also have an 'electric' sense to seek out prey and superb vision in the visible spectrum. Lastly, they have mediocre smell, superb touch, and hearing a bit sharper than humans' though their range is 5hz-10khz.

Note: I want every possible communication system that can be mutually used between Homo Sapiens and Tetrapus Sapiens able to convey complex ideas.

Figuring out how to communicate with other people is a very difficult problem. Linguists traditionally call this the "gavagai problem", after an early example.

Suppose a linguist has made first contact with a previously unknown group of humans. She wants to understand their language, so she points to a rabbit and makes a questioning noise. One of the natives responds "gavagai".

With aliens, the problems become even worse. Pointing at something is a fundamentally human gesture, but perhaps for the tetrapods it means something entirely different: say, pointing their arms at something means their head points in the opposite direction, and you're supposed to follow their head, not their arms. With aliens, we have no shared means of communication, not even facial expressions.

After observing the tetrapods for a while, the humans would undoubtedly notice the complex color changes used to signal. Analysing these would give us an estimate of their visual range, which is conveniently similar to ours. So visual communication is probably the best option, since both species seem to use it.

The humans would start by sending a message with some sort of mathematical pattern in it. For instance, they might write this on a piece of plastic:

If the aliens had any mathematical knowledge, they would recognize the series of prime numbers. That would make it clear we were trying to communicate with them, since this is unlikely to happen by accident. Then we would wait for them to make the next move.

Since our knowledge is more advanced than the aliens', and (if I understand correctly) our intelligence greater, we would probably be the ones to learn their language, rather than the other way around. Communication would take place through written messages or, eventually, simulated color changes (if the humans designed an LCD wetsuit or the like). 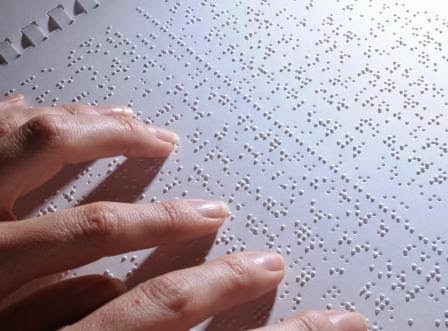 Your tetrapi have excellent sense of touch. I bet that is how they read their carved letters. Humans initially carved letters because they were more permanent but this is even more important for an aquatic species.

I like very much the idea of the tetrapi loving Braille and especially leveraging their societal math capabilities up with the concepts intrinsic to number depiction - consider the benefits of the number 0, which the Romans could easily have understood but had not invented. The humans will all need to learn to read Braille.

This idea has lots of scifi ramifications as the tetrapi take the possibilities of Braille off in unexpected directions.

I am puzzling over "many diverse languages" when the basic mode of communication is color change, which one would think would carry with it intrinsic meaning. I suppose patterns, color, speed and sequence make up the language. That will be a harder one for humans.

I worry that attempts to translate human sounds into vibratory or electrical signals, while certainly possible, would not easily address the place in the tetrapods brain where language is and while they might learn to understand it would be hard for them to speak.

If they use colour communication, then your humans need a waterproof tablet with a translation programme loaded onto it. The human speaks or types their message, which then is played on the screen as the correct series of colours and patterns. The tetrapus replies with colours/patterns and the tablet records it and translates it back into speech or text. Or the tetrapus can tap away at the screen to type a colour message.

At first contact stage, the humans will be taking photos/videos of the tetrapi and playing those back, until they have built up a vocabulary. This has the possibility of confusing the tetrapi, since they'll be seeing a person not just a message. "Why are they continually showing us a picture of Freddipus shouting that he's seen an alien?"

How fast, how accurate and how subtle your translation programme can analyse the colour pattern and provide a translation will depend on what sort of processing power you want your computer technology to have.

For the tetrapi to initiate this type of comms, they need to find a human with the translation app on their tablet. So they may learn to mimic the shape and colour of human symbols, to provide a cruder conversation. Emojis or short words like HELP or TALK.

Honestly, I'd start with something simple at first. Braille might work well between the Tetrapus, but it would be inefficient for humans to use to communicate with them. Not only would the humans involved need to understand Braille, which few sighted people do, but then the words written would need to match up to the understanding of a Tetrapus. Additionally, it would have to be the same style of Braille as we use, another sticking point. However, it could work fantastically down the line as they begin to understand the concepts of each other's language.

That's the big thing here, how does a Tetrapus view the world versus a human? As Draconis explained, two cultures with two very different languages could point at an animal and call it two different things. However, one may be defining it as something different than the other and thus you have a dissonance in the communication that you won't even realize until much further down the line. Granted, miscommunication like this can be great for world-building and tension. The key to communication would be for each side to slowly be able to understand how the other sees the world. You'll have to remember that it's not just the humans trying to communicate with the Tetrapus, but that whatever method is used the Tetrapus has to be able to experience the same steps to clarity as the humans.

I would simply go straight for pictures since they already communicate via color and sounds would be difficult, for a human, underwater. A movie that might help is The Arrival. It is NOT scientifically sound in all aspects, however, it's a good way to watch a step-by-step process unfold for figuring out how to interact with an alien species.

Electrocommunication is also an option upon the first encounter. It's relatively understood by humans and could at least be used to explain 'yeah we're not here to hurt you' by displaying submission or the like. They might even have the equipment on hand, depending on how they first find this new race. I don't know enough about it to preach a good basis, but it holds the possibility for a messy first try at talking to them.

Our understanding of human to non-human communication has a really long way to go. I'd recommend reading up on research about human-cetacean communication and see what you can use from that. https://en.wikipedia.org/wiki/Human%E2%80%93animal_communication#John_Lilly_and_cetacean_communication

Not the answer you're looking for? Browse other questions tagged science-based biology technology aliens .

5
If I had an alien race, how would they interpret our numerical characters as being numbers?

7
Scientific Accuracy - alien communication ideas
2
How do we communicate with (fairly) intelligent aliens?
3
How do I effectively wage war against an aquatic alien species?
10
How horribly would this alien die in earthly conditions?
6
How can I communicate with a collective consciousness?
3
Scientific Accuracy - How can we make an alien brain more 'efficient' than a human's?
8
With as much scientific accuracy as possible, how would chemicals injected in one's body be removed?
2
how could an alien species with modern technology communicate at long distances when their language is made up of sign language?