How long is a solar-solar eclipse in a Binary Star System?

I am co-writer of a historical fantasy project, and one of our elements is slightly science-based: the story world involves a planet in a binary star system. Specifically, that our planet orbits one star (very similar to that of Earth) which in turn orbits another star, much larger but much more distant.

One of our narrative events is an eclipse of the far star (A) by the near star (B), as shown below in a highly technical illustration which I just made in five minutes using MS Paint: 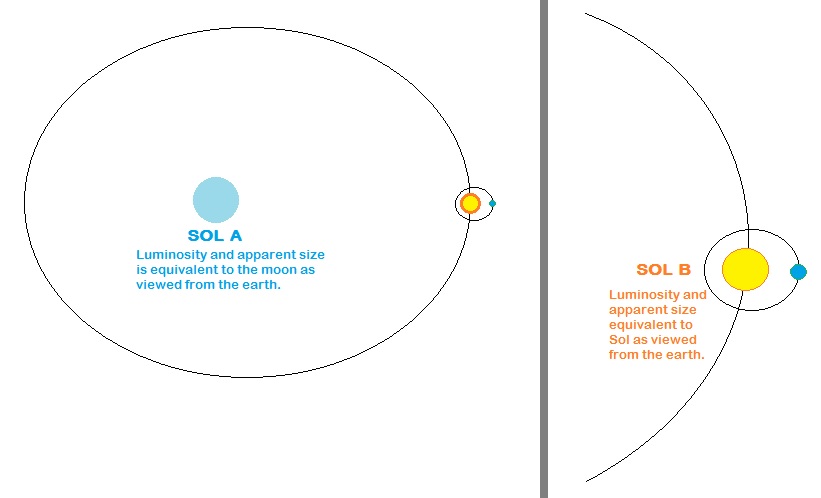 Needless to say, Not To Scale. Probably.

To an extent, detailed mechanics of how one sun eclipses the other are not vital for my purposes (although I'd be interested in learning from anyone with useful knowledge on the subject). What I'm principally interested in knowing is this:

How long might such an eclipse last, from the point of view of a planetary observer?

My intuition is that, if all three bodies were perfectly aligned on a plane, the eclipse period would only be determined by the planet's orbital period around B. As the planet orbits, the more distant A would appear to slide out from behind B and gradually cycle around to the "night" sky, eventually returning to the "day" sky to be eclipsed again as the planet completes its year.

In which case, I guess the duration might be a matter of weeks, maybe a month, depending on exactly how big A and B appear in the sky (if all this were happening on earth). So, first off, does that sound about right?

From this, what I would also like to know is the following:

1) Can the frequency of eclipses be made plausibly less regular than simply annual?

I'm thinking star-to-star or star-to-planet offset planes, or a wobble in the orbit of one star or the other, perhaps. Something that would make an eclipse predictable but less immediately obvious. And if it resulted in weird irregularity of where the two stars appeared in the sky, that would be Just Fine. The weirder, the better.

2) Is there a way that the duration of the eclipse could be made longer?

For example, would different directions of the two orbits have an impact on how it is perceived, or something like this.

In an ideal world, we'd be able to justify claiming something like the eclipse occurs once every twenty (or one hundred) years, and lasts for a year (or five) whenever it does. A ratio of 100/5 would be great, or a longer waiting period even, but I'd take 20/1! However, I'd prefer this to have some degree of rigour to it, so if there's no plausible way to extend it knowing that would be just as valuable.

Any assistance offered will be gratefully received, along with a salute in our project when the event in question takes centre stage.

I can't imagine such a system actually working. (but I'm old, not that bright, and not competent with orbital dynamics) According to wikipedia the longest duration solar eclipse calculated so far will be 7 minutes in August 2186 C.E. The longest orbital period of the major natural satellites (which can be disputed since "major" isn't well defined here, I'd suggest that their orbital eccentricity is critical, it needs to be << 0.5, but again what do I know?) is Phoebe's at 550 days, or less than twice as long as Earth's. So, perhaps you could reasonably double the length to 15 minutes. Duration of months? I don't think so. But with a very very slowly spinning planet, with a very very thick atmosphere, and with a liberal eccentricity, I'm not at all certain that it couldn't be possible. (Certainly far from Earth-like).

The B system is practically identical to the Solar System: an Earth-like world orbiting a Sun-like sun.

There remains the problem of SunA. We know that its angular size must be the same as SunB.

Angular size, for large enough distances, is inversely proportional to distance itself (doubling the distance halves the angular size). Let's suppose SunA is at 40 AU from SunB; then it must be forty times as large, which makes it a giant star.

And here the problems begin, because at that distance, the Sun would be about 250 times as bright as the full Moon. Conversely, this star must be 250 times weaker than the Sun.

The low luminosity and white color make it a white dwarf, while the angular diameter require it to be the size of Aldebaran.

So, starting with the need for the star to be large and blue-white or yellow-white, we need to look in the central top section of the Hertzsprung-Russel diagram.

There we find Polaris A, with 37 times the radius of the Sun. It is a young star and its position on the diagram causes several other problems, but let's give it a try.

Polaris unfortunately is 1260 times more luminous than the Sun, so at that distance it would be more than half a Sun's worth. It's unlikely anyone might mistake it for a moon. A smaller, dimmer star would also be distinctly redder.

Polaris is also 5.4 times more massive than the Sun, so the two stars would revolve around a common center of gravity at around, say, 32 AU from SunB and our planet, with an orbital period of about 80 years.

The eclipse would occur once every year. The "shadow" would be as large as the Sun, which means some 1.4 million kilometers. The shadowed area, assuming the three bodies are coplanar, with the "Earth" traveling at 30 km/s, would be traversed in about thirteen hours (somewhat more than that since SunB is probably traveling in the same direction with respect to SunA).

Not the answer you're looking for? Browse other questions tagged time solar-system eclipses .

2
The view in a binary star system
6
Please help me calculate acceptable planet sizes & eclipse shadows cast by my binary planet system
4
How to calculate the light received by a planet during a binary star eclipse?
8
How can I lengthen a total solar eclipse on an earth-like planet?
5
How would a colliding binary affect its planetary system?
2
Longest possible eclipse in double star system
11
How long would this eclipse last?
6
Binary Star System Build - Alpha Centauri
4
What are the odds of a binary solar eclipse?