What would an efficient swimming creature in magma be like?

This question is specifically about the mechanics of an alien creature swimming in highly viscous magma, the unlikeliness of life surviving at magma temperatures etc isn't relevant. Just imagine it's extremely thick mud if it helps. :)

My research so far:

Swimming in syrup is as easy as water:

Unless I'm mistaken, this means viscosity doesn't necessarily make you swim slower if you are big enough. (Also being a snake with gorilla arms helps, apparently.)

I don't know nearly enough physics to make heads or tails of this. I could not find more in-depth information about what I'm looking for.

Perhaps if there's a relationship between size and ability to swim in viscous fluids, the size it'd have to be could be calculated from the viscosity? Perhaps it'd have to be millions of times bigger.

Would the equivalent of jet propulsion be more or less efficient in a extremely viscous medium? I'd guess less, but I have no way of knowing. I don't know enough about the mechanics of swimming in general, or what style of locomotion would be more efficient in a high viscosity medium. 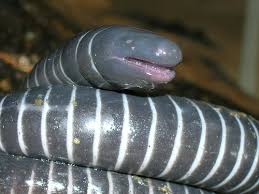 Their muscles are adapted to pushing their way through the ground, with the skeleton and deep muscles acting as a piston inside the skin and outer muscles. This allows the animal to anchor its hind end in position, and force the head forwards, and then pull the rest of the body up to reach it in waves. In water or very loose mud, caecilians instead swim in an eel-like fashion.

This system would work for magma also: worm style in thick magma, eel style in thin magma. A nice side note is that caecilians are in the same class as salamanders, which in legend lived in lava.

Here is an invented addition which I stole from the earthworm system: worms secrete slippery mucus which lubricates the soil and helps them push their heads through. Mucus and magma don't mix, but what if your magma creature could route heat from the body up to the head? The hot head would decrease the viscosity of the magma there and so decrease resistance as it pushed through. Heat pulled from the magma behind would firm up that region and so offer a better substrate to push off of. I think the benefits of the hot head / heat sink system would be greater for a larger creature than a smaller.

I could also imagine a very sharp head - again to better push through the magma. Worms accomplish this by tapering their heads nearly to a point. I don't think the caecilians can do this. When I was very little I read a story about a witch whose power came from a jewel that she had taken from the head of a giant worm she had killed. I have never been able to find that story but you can find lots about animals with magic jewels in their heads.

Which, like the toad, ugly and venomous, Wears yet a precious jewel in his head; Shakespeare, As You Like It Act 2, scene 1, 12–17.

Your legless magma salamander could carry a jewel on its head: the jewel conducts heat and is the part that heats up, combining the benefits of heat and sharpness for pushing through the lava.

Heavy: so it can sink into the magma. Like, heavier than rock dense.

Some sort of "heat sink" so it can surface, vent excess heat, and then dive into the lava again. This could be something like wings, which are folded flat against the body when under the magma (streamlining and reduced thermal area) and then it unfolds them when it surfaces.

It's probably cold blooded, and the magma warms the blood, which is then circulated through its body. The less effective the heat transfer: the longer the creature can stay under-magma.

Probably maintain a layer of dead skin or scales or something over its outside to act as a heat-shield - kind of similar to how a layer paint protects a surface from rusting. It may not actually be "dead" so much as something like mucus - a specialised bodily excretion.

Incredibly strong: it has to push its way through molten rock.

Probably have some specialized chemistry in its blood to prevent boiling.

I have no idea what this creature eats or drinks. I can't imagine it finding much water anywhere nearby. Maybe you could base it on one of the sulphur breathing lifeforms that you get in volcanic vents.

I imagine that swimming in magma is much like swimming in any other fluid - it's thick, but the laws of streamlining and propulsion still apply. A jet turbine would need to be a lot bigger to allow the magma to flow through it, and it would be far less effective in a fluid than a gas (coefficient of expansion thing). So I'm going for flapping things. Even if it's a man-made magama-submersible, it would probably have flapping things rather than propellers or jets.

In order to properly "swim" anything (including your creature) has to sink into the fluid. Considering that the density of lava is high, your creature will probably sink to a certain level, not completely.

In this case it can adopt the strategy of the "Jesus Lizard", for which the higher viscosity of magma would help. 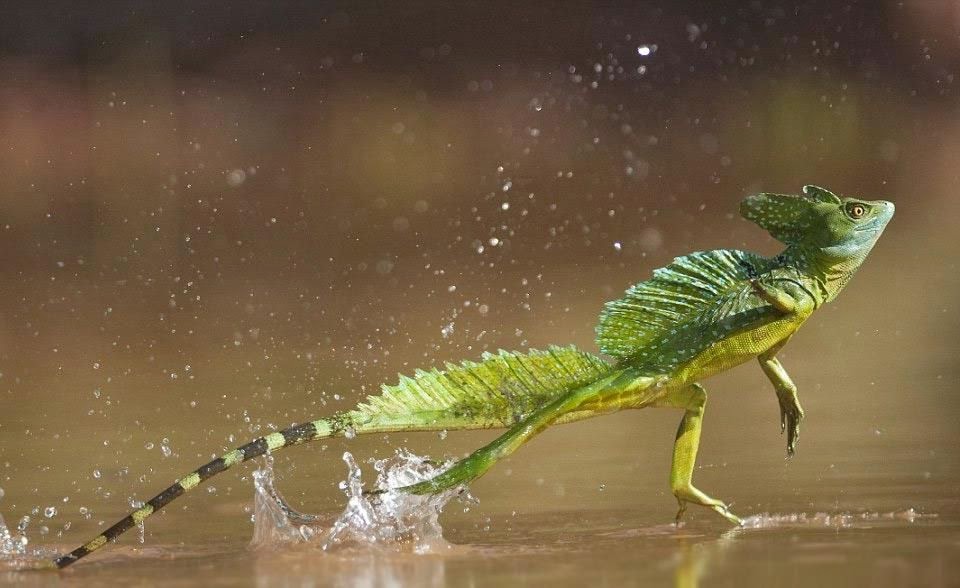 The key parameter that describes the scaling of viscous forces on a body interacting with a fluid is the Reynolds number $\mathrm{Re} = uL\nu^{-1}$, where $u$ and $L$ are the body's relative speed and characteristic length, and $\nu$ is the kinematic viscosity of the fluid. If you scale up a body's size or speed or immerse it in a fluid of different viscosity, as long as the Reynolds number of the two situations is the same the behavior of the fluids will be similar.

A smaller creature would have to learn to deal with life at very low Reynolds number, as described in the classic paper by Purcell. At low Reynolds number, inertia plays no role whatsoever: you can't push the fluid backwards to propel yourself, the way fish or mammals do. You have to wiggle your body repeatedly to gradually nudge yourself forwards, like a microorganism with a flagellum. There's lots more interesting stuff in that article, for example, there's no point chasing your food, whether it's animate or inanimate:

The transport of wastes away from the animal and food to the animal is entirely controlled locally by diffusion. You can thrash around a lot, but the fellow who just sits there quietly waiting for stuff to diffuse will collect just as much. ... But what it can do is find places where the food is better or more abundant. that is, it does not move like a cow that is grazing a pasture--it moves to find greener pastures.

So unfortunately, we're not talking about majestic lava whales or magma dragons or anything like that... We're talking gigantic sedentary bacteria. Sorry.

At that density swimming is more like burrowing than anything we would think of as swimming. With a viscous material minimizing drag is important, but it does not need controls surfaces or much in the way of fins really just muscle mass, the magma is not going to flow around them much when they push against it. This means they also need an extremely streamlined head more like a burrowing animal except even more pointed.

so you have two likely body plans, either a limbless creature like a burrowing snake or sea snake OR you have a compact body with short powerful limbs more like a mole. You could even combine the two with something like a Bipes.

Of course you also have to consider how they get in or out of the magma, since there will be a layer of cooled solid rock no matter how they enter or exit.

The most energy efficient way I can imagine is as follows:

And be super patient!

edit to address question in comments

That's correct, to use this method of locomotion, creature would have to be able to somehow increase or decrease it's buyoancy, overcoming enormous external pressure. I would suggest two ways to achieve it:

1) assuming it gets it's energy from fission reaction: let's say it is able to "filter" nuclear material from magma, and regulate the criticality in some way. Luckily we have CANDU reactors to prove that you can have nuclear reaction without enriched fuel. By increasing it's internal temperature, creature would expand it's volume and regulate it's density.

2) or, it can "filter" heavier elements from surrounding magma to increase it's density and "excrete" them out to lighten up.

None of methods is fast, of course.

Basically your magma swimming beastie would use any form of locomotion seen in marine organisms. The main difference is the remarkably viscosity of magma compared to seawater. Consider this creature would be part of a complex biosphere with a multitude of ecologies and difference biomes for magma-dwelling lifeforms.

Effectively whatever means of locomotion are used in the marine organisms will have a magma-swimming equivalent. Fish with fins, seals with flippers, manta-rays and sting rays with their wing-like bodies, and cephalopods with jet propulsion.

Basically it's all about organisms exploiting fluid dynamics to move through a viscous medium. Magma is just more viscous than most other fluids.

Not the answer you're looking for? Browse other questions tagged biology physics xenobiology .

38
Creature that swims in the solid ground
7
What is the range of lava/magma viscosity on exoplanets; what conditions would have the least viscous lava lakes?

22
What traits would a species need to survive in magma?
5
Lizard-like creatures "swimming" through the sand?
14
How plausible would a fully aquatic bat be?
4
What would the biochemistry of a vacuum dwelling creature look like?
16
Swimming in space. What is the mechanism?
1
What would the skull of my creature look like?
6
Would pleopod swimming scale?
2
How would life on a magma planet be?
6
How can a creature have an efficient bird like respiratory system without hollow bones?