Larry Niven invented a fancy weapon: the Variable Sword which, in essence is a cheese cutting wire on steroids, able to cut through almost anything.

In theory this thing is possible, given it's thin and strong enough.

Question is: is such a wire possible in practice?

In particular: would a carbon nanotube thread able to do such feats?

Of course nothing would be able to really cut "anything", but what about a human body (bones included)? Furniture? Glass? Various metals?

Can anyone give some formula relating size, strength and cutting ability? I did not tag it as "hard-science" to encourage answering, but it will be considered as a bonus.

Note: I'm not interested in the "force field" part of the weapon; using it as a cutting loop is perfectly ok.

It has been proposed THIS QUESTION has the needed answer, but that is not true: I'm asking plausibility on real science of such a weapon, while the "proposed answer" postulates existence of something actually similar, asking how to counter the weapon. I fail to understand the similarity.

Question stands: is the "variable sword" really possible? in our world (no unobtanium, please); if so: would carbon nanotube a suitable candidate?

A single carbon nano-tube will break if you try to do this. Carbon nanotubes are incredibly strong, but also incredibly thin. This paper did some microscopic experiments and found that multi-wall carbon nanotubes can have a tensile breaking strength of 63 GPa. This chart gives the strengths of various materials for comparison. Diamonds have a compressive strength of 10 GPa. High strength steels top out around 2 GPa.

Strength is the force required to break something divided by its area. The ridiculous strength of a single nanotube is more than offset by its tiny area. Most single wall nanotubes are roughly 1 nm in diameter. I can't find numbers for the multi-wall nanotubes. If we make the optimistic assumption that your multi-wall nanotube is 10 nm in diameter, and is mostly solid with a negligible inner diameter, you have an area of 3e-16 m^2. Therefore your 63 GPa of strength turns into 20 micro newtons. It could hold a weight of 0.000002 kg, about half the weight of a sesame seed.

The sesame seed is a million times larger than the nanotube. Although this is incredible strength for something that is less than 100 atoms wide, in my opinion, it doesn't seem like the kind of force you need to chop a man in half. How much force is that?

TLDR version: If you try this on a ductile material like most steels, the force from your nano-tube will inevitably get spread out over at least hundreds of atoms. For ductile materials, no matter how you do it, there is a minimum amount of energy (and force) required to cut something in half. For brittle materials, I suspect this is also true, but I don't really know.

This next part gets pretty technical. I do my best to make it clear to an audience without a specific scientific background in this area, but that is a hard thing to do. I am a graduate student in Mechanical Engineering doing my research in solid mechanics, the study of how solid objects deform and break under load. On the first day of one of my classes, we talked about the continuum assumption: Atoms exist, but we don't have to care as long as we are looking at problems far larger than atoms. We can talk about strength and stress as if solid objects were just solid continuous things, not a messy network of atoms.

In your question, that assumption breaks down. I was tempted to try and compare the breaking strength of materials to the strength of your mono-molecular blade, but I don't think that will be accurate. The majority of experimental work doesn't really apply to single atom wires.

This SE answer discusses how things are actually cut at the atomic level. He references atomistic simulations of a nano-indenter (like a tiny blade) cutting the surface of a block of copper. Atoms in a metallic solid are arranged in a crystalline grid. Near the nano-indenter this grid is disrupted as the copper is cut. This is known as the amorphous region. This disrupted region soaks up a lot of energy (and force) as the bonds between atoms are repeatedly broken and reformed. The nano indenter also creates dislocations, atom sized flaws in the grid which propigate outward from the amorphous region.

It is worth noting that those nano-indenters are not that much bigger than a single walled carbon nanotube. They are roughly a dozen atoms wide. Copper atoms are 0.15 nm in diameter. Therefore they are slightly larger than the 1 nm typical diameter of a single carbon nanotube.

Fracture mechanics is a branch of solid mechanics that attempts to link the individual atoms in front of a crack to macro-scopic descriptions of how cracks move through a material. Nothing I have studied in fracture mechanics is exactly like an atom-scale wire trying to cut through a material, but it is the closest thing I know. This image shows a crack trying to travel through a material as the material is put under increasing load. There is a region known as a plastic region right in front of the crack tip. The material here is permanently damaged either because the ordered crystalline grid of atoms is completely destroyed, like the above image shows in the amorphous zone, or the grids are broken up and rotated. Either process absorbs energy and force. Even for a force concentrated on a single atom, this plastic zone is going to have a minimum size. The atoms will spread the load out over a larger area.

The above image isn't exactly what you are looking at, but it is the simple publicly available thing I could find. This scientific paper looked at atomic simulations for a more similar situation, a relatively concentrated force perpendicular to a block, and their results support my conclusion. No matter how small your cutting wire is, the atoms will spread the force out. 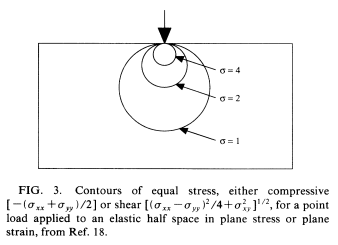 Cutting a ductile material requires some minimum amount of energy. Your nanotube would have to supply that energy by using a force to push the atoms out of the way. I highly doubt that enough force to lift half of a sesame seed is enough to do this.

All of this discussion of plastic zones involves ductile materials like metal. I don't really know what will happen in brittle materials, but I suspect a similar argument about free surface energy could be made.

Not the answer you're looking for? Browse other questions tagged science-based weapons materials or ask your own question.

1
What Alloys would be practical for making a sword that melts through things
8
What density can I set for Uium, to be reshaped by moon-mass black/white holes
8
Weapon design: a conceivable superheated sword capable of cutting through most things
5
Making a Niven-style “variable blade” using electromagnetic fields
2
Crete-sized floating island plausibility
23
A steel-cutting sword?
1
Is there a scientific way to make a metal that can pass through other metals?
8
Sword that is limp when in sheath, and hard when drawn?
5
How would humanoid creatures with powerful jaws, claws, and a tail efficiently use their anatomy in barehanded combat?