What are the design implications on firearms when they will be used by a race without opposable thumbs?

I have a race in my world that in most respects is comparable to a human, perhaps not in form but certainly in function.

One of the key differences between humans and this species is a lack of opposable thumbs.

As in the title I am particularly concerned with how this would impact the development of firearms. For the sake of this question assume all other aspects of using a firearm are functionally the same as a human. (aiming for example)

There won't be any diagonal gun grips

There are six main motions that the human hand can make: 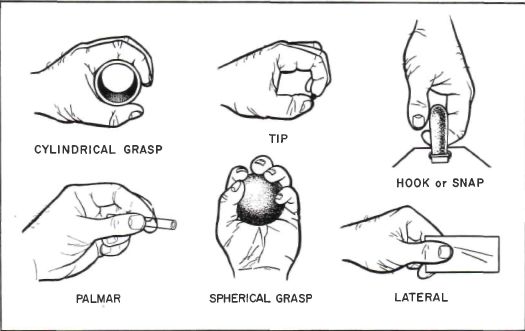 Of these six, only one can be done for sure without a thumb. The others are either impossible or very clumsy.

Because the pistol grip typically used by humans on our firearms requires a thumb, that grip style won't work for these five-fingered-no-thumbs people. Since the cylindrical grip still maintains a great degree of power and control over the hook grasp, we'll design a firearm grip around that motion.

Because they no longer have a thumb to brace against the recoil of the weapon, the recoil will need to go somewhere else. It can't go into the fingers because the grip is moving in the weakest direction for the fingers to grasp (ie, the grip is moving back towards the wrist, away from the fingers). The wrist and forearm seem the best place for me. If the barrel of the firearm is placed co-linear with the axis of the firearm, accuracy can be preserved as well as recoil force put into larger/stronger body structures. 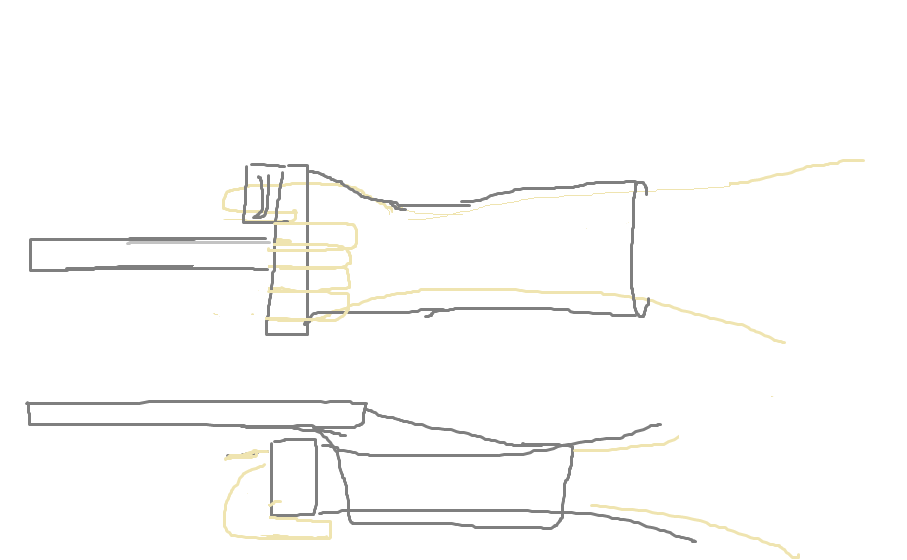 I'm sure that some clever machinist is going to come up with a different, better, more efficient firearm than I just did. I don't see how you would use any other finger for the trigger other than the "thumb" or the pinky since all the other fingers would benefit from being squeezed together.

There's plenty of space to innovate. This doesn't address in the least the problems with loading shells into the gun since humans use a pinch grip when loading rounds. These non-humans can only do pinching motions in a very clumsy way. I don't know how you could make reloading efficient given the inferior grips available to these creatures.

Rifles could easily dispense with the forearm brace and use a shoulder butt much like normal human rifles do. The above (and very crude) diagram shows a possible pistol sized weapon.

Take a look at "old style" crossbows - trigger mechanism was a lever underneath the hand grip, simply squeeze. May be easier to do it with a thumb around the top of the stock, but with a longer palm having the heel on top and wrapping those longer fingers around should do just fine. For pistols check out the "squeeze action" Protector Palm Pistol - based on image not having a thumb shouldn't be an issue. Range and accuracy issues though... 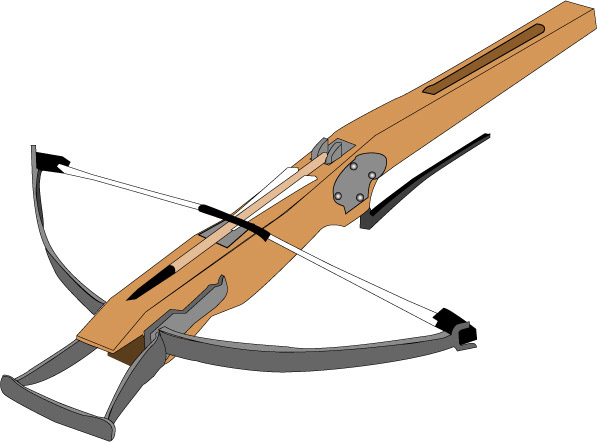 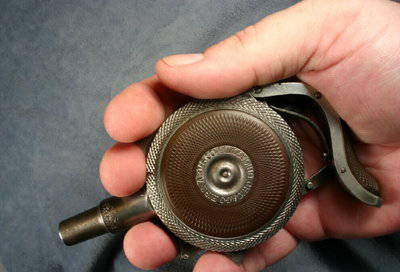 When life gives you lemons...

... in this case, don't make lemon grenades. Just make do and turn your fingers into thumbs.

For example, try gripping some sort of handle with your two middle fingers on the front (as normal), but your index and pinky fingers on the back (so the backs of the fingers are touching the handle). It feels weird, but it should work. Now, imagine you've been holding things like that your whole life. The human body would have adapted to make this grip easier for you; this fictional species should have the same adaptability. Similarly, gloves are great at improving grip, so maybe this species has specialized gloves they can wear that make this kind of grip even easier.

So I'm thinking you could make firearms pretty much the same as they do now. It seems like grips would have to be thinner, which means magazines will have to go in somewhere else (which they already do for most guns, I'm just saying pistols will look different). The trigger will have to be operated by the middle finger (gives a whole new meaning to flipping someone off). Other than that, I'm thinking things could stay the same.

I know this is kind of avoiding the premise, but I think opposable thumbs are so useful, that something similar to them has to be one of the first inventions of an intelligent species. If they can't get them through evolution, then they can get them through practice.

Anyway, here's a picture of what I'm describing: 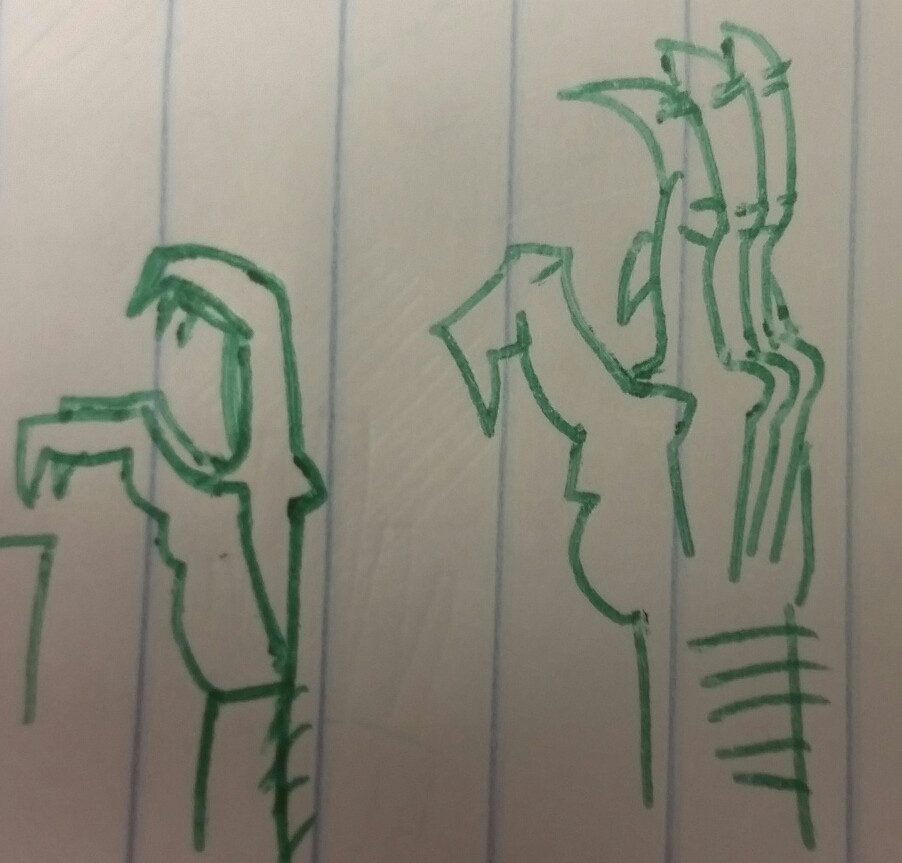 something like a suitcase gun handle might work, or like the guitar gun from desperado. Both are terrible for aiming though, but on the other hand bulk would be less of an issue. With this recoil would also be more of a problem on large guns, something more like a normal rifle would be good for larger guns. Shoulder bracing will make even human long guns work fine.

the real issue is how do they build them without the ability to do precision grips. 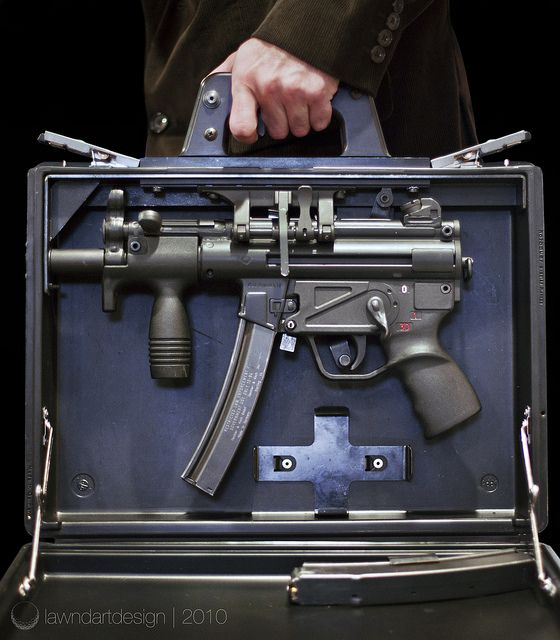 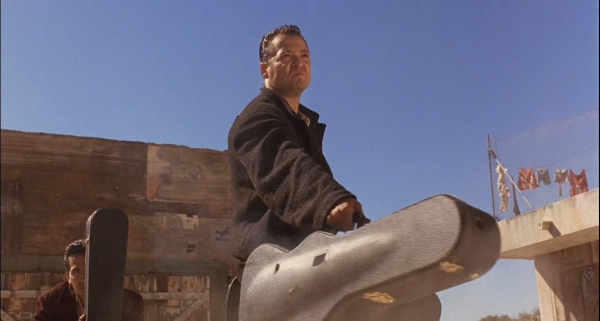 TDLR; Make it triggered by the shoulder, and loaded vertically from the front.

Using an electric mechanism on the shoulder, you avoid any typical trigger mechanism, and can use a basic electrical connection (similar to a flashlight), to trigger the firing pin. Other options may include mechanical firing mechanisms, but this may add weight to the weapon. Rotating the bullets by 90 degrees allow for a hand on the foregrip, and the other to be loading bullets, similar to a shotgun.

If you're worried about accidental discharge, you can add a hand trigger (a grip with a button on it to make a similar electrical connection), and hold the weapon without it depressed.

The advantages are continuous loading, allowing for a never ending stream of bullet, simply design, tactical/logistical ease, and universal usability (we could use this now if we wanted!).

Downsides as mentioned are accidental discharge, sniping inaccuracy, and general gun maintenence. The stock would most likely be hollowed out to make room for firig mechanism, but would require extra weight to allow for possibly multiple buttons, and the mechanism would not be as conducive to sniping due to the movement involved. The mechanism itself would be difficult to clean on the go, and any gun maintenance in general is difficult without thumbs to make pinching motions.

As for pistols, just add a stock (a lot of pistols have stocks as well). You could make it single shot and loaded directly onto the barrel, or expect that reloading would use multiple smaller magazines with a smaller barrel.

Rats have surprisingly dextrous hands despite lacking opposable thumbs (or really anything resembling a thumb). Rats can grip objects by pressing them between their palm and fingers, or more often with a two-handed grip. (You can see this two-handed grip most easily if you watch a rat eat something small.)

Their guns would likely be designed to be gripped between two hands. Pulling a trigger just requires a free index finger.

For reloading, you'd have the magazine designed to comfortably fit between the fingers and palm, and not require much dexterity to put in, because one-handed grip is far less dextrous than two-handed. You'd probably also design the gun to be braced against the body while reloading, so you can maintain a one-handed hold on the gun.

Not the answer you're looking for? Browse other questions tagged science-based weapons anatomy or ask your own question.

6
Upper limb disposition for a mammal-like alien with radial symmetry?
10
How would the rules for carry and use of weapons be affected by reliable stun guns?
11
What would be the best fighting styles for a humanoid with a low center of gravity?
14
Is a four armed arboreal reptile as described viable?
3
Evolving an intelligent avian race with a human-like appearance
2
How effective are bows when used by a race with superior strength? (numerically)
7
Anthropomorphic flying squirrel, gliding capability
3
How would digitigrade fingers work?