If Earth spin decreased, how can I get it spinning faster?

My question is: If that happened, what would be a plausible way to get to Earth spin faster, to get back the protection provided by Earth's magnetic field? Back to normal 24 hour days? Without destroying Earth in the process, so please no asteroid bombardment if we can avoid it.

We should increase spin slowly: even if it takes a century or two, it is OK. Because of huge energy necessary, any quick solution might melt Earth crust in the process.

And even though a slower spinning Earth was not so deadly, long nights are certainly annoying. And adding leap second every month (as we will have to in a few centuries' time) gets old soon too. We want to get Earth spinning because we want to, not because we have to. How?

XKCD cannot find an answer - maybe it is really tough.

I am not concerned about the bad effects this slow spin would have on Earth (you can add your answer to the question which inspired mine, follow the link). And "undefined human activities" cannot be reversed for whatever reason, we need to invent something new and interesting.

I don't know if the magnetic field would be affected but we would have bigger problems. Days and nights would last ten times as long which would wreak havoc on basically everything. It would generate big storms for example, because hot air from one side of the earth would rush to the cold side.

Changing the spin of the earth is unfeasible in any practical way. As for theoretical solutions, you could build a ton of railguns on the equator that shoot large chunks of the earth into space to generate momentum (ludicrous!). Alternatively, you could bring a massive spinning object into earths orbit. Tidal forces would translate spin from the new moon into the earth but it wouldn't be enough to change it a whole lot and it would take hundreds of millions of years.

However! If the earths spin changed abruptly, then it must mean that a method exist in this world (well, at least in one direction). The only way to reverse this process is to find these magical 'undefined human activities' you mentioned and figure out how to reverse them.

How much energy do we need?

This is the main question we need to answer for a sanity check on whatever we're doing to speed the earth up. Luckily, wikipedia has an answer, as part of this helpful table of how much energy different things have. The Earth, as it turns out, has $2.1 \times {10}^{29} J$ of Energy. If the Earth has slowed by 90%, that's about the same amount of energy as we need to speed it back up.

Where can we get this energy?

For reference, that's about a million times the energy in all of Earths fossil fuel and uranium. Luckily, there's a good source of energy close by: the Moon. Specifically, the Moon has just about the right amount of energy to speed up the Earth if we convert all of its kinetic and gravitational potential energy into rotational energy for the Earth.

Not sure if applicable to planets but YORP effect can change asteroid rotation.

When a large Sun-facing portion of an asymmetrical space rock rotates away from the star and into night, it can radiate more energy than that of smaller areas and tweak its spin rate.

Asteroid 2000 PH5 is a near-Earth space rock with an average radius of just 187 feet (57 meters) and a spin rate of once every 12.17 minutes, making for a very short "day" on its surface. For comparison, the Earth completes one turn on its axis every 24 hours.

Visual studies of the space rock between 2001 and 2005 found that its 12-minute day shortened by one millisecond per year, indicating that its "daily" spin was growing faster over time,

The Yarkovsky–O'Keefe–Radzievskii–Paddack effect, or YORP effect for short, is a second-order variation on the Yarkovsky effect that changes the rotation rate of a small body (such as an asteroid). The term was coined by David P. Rubincam in 2000.

An unevenly shaped asteroid heating up in sunlight re-radiates the energy away at right angles to its surface. The resultant net torque can both provide a small thrust (the Yarkovsky effect), causing the asteroid to drift towards or away from the Sun, and also change the asteroid's spin rate — the YORP effect, now seemingly observed for the first time 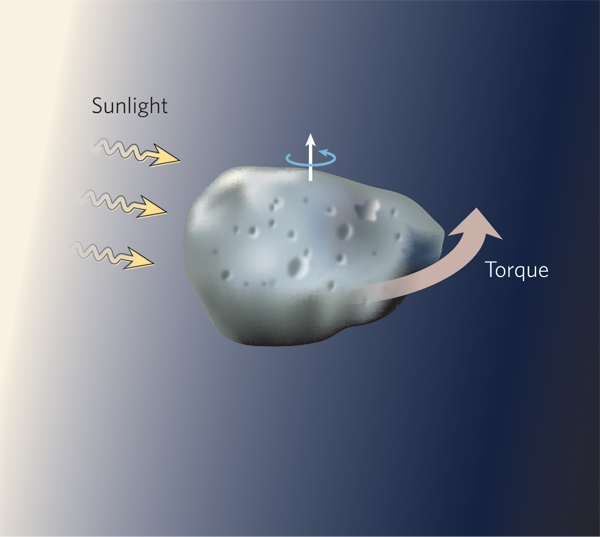 For a symmetrical planet it would mean changing either how much solar energy is received or how much is not received.

Remove much of the Earth's mass.

The giant impact hypothesis states that about 4 billion years ago, when Earth was but a wee protoplanet, a Mars-sized object dubbed "Theia" hit it at an angle of 45 degrees, moving at 4 kilometers per second. This

Previously, the Earth had a day of about 5 hours. Today, the day is about 24 hours (though the Moon is also changing the Earth's rotation as it recedes). The reason? Conservation of angular momentum. More mass put onto an object means that it will rotate slower. Conversely, take away mass from an object and it will spin faster.

So an asteroid impact would actually slow down the Earth's spin. To speed it up, simply remove most of it.

I think that violates the request to not destroy Earth, though, so even though that's your best option - because it would actually work - we have to consider alternatives. These are - to say the least - wacky, and would almost certainly not work. But, given the alternative (death!), I suppose we have to try.

It is actually pretty easy.

Larger the mass and the train and tracks needed to carry, shorter the wait. Obviously the train would have to accelerate as the rotation goes up.

As a bonus you could have a smaller train in the same track permanently at whatever time gives convenient temperature and live there.

If you're willing to accept Futurama-like soft science (It's the future so we can do it), then you could construct a number of large solar sails bound to the equator and have the sun drive the earth like mill...

Creating an artificial magnetic field with coil generators will be orders of manitude easier than spinning the planet. We already generate enough energy for re-creating an Earth's magnetic field in case it ceases to exist.

Things like this don't happen overnight. The best workaround would be to install a number of spin-acceleration devices along the equator line that would, for example, interact with corresponding devices on the Moon depending on their relative positions, for a prolonged period of time, such as millions of years.

Reduce the Circumference of the earth. The small the circumference, the faster it will spin under the same energy-level.

How? I've got no idea. LOL Maybe reduce the depth of the crust as this gent was asking about. 1km Crust

The rotational energy of the Earth is on the order of $10^{29}~\mathrm{J}$. Applying that amount of energy in a controlled enough way that all of it goes into speeding up or slowing down the rotation without even a tiny fraction getting turned into something like heat (and melting the entire surface in the process) or being unevenly distributed (potentially tearing the planet apart, although most of it would stay gravitationaly bound together and would reform) is pretty much pure magic.

The obvious: use the same process that made it slow down. The plot device introduced to create the situation should also plant the seeds of its eventual resolution.

For example, if future fictional physics provides a way to extract energy from the rotation in a large scale, why would it be applied to the earth in such a large amount, rather than, say, Jupiter? It would be an accident or unintended consequence of... something that takes a lot of energy and messes with other dimensions, like opening a permanant wormhole with a colony world. Instead of space travel and a hyperspace jump, now it's a simple and convenient tunnel to drive to the other world. Skip forward a few decades and economic importance is attached to it, and the side effects become known, or "incedents" slow down the rotation in bursts.

How to restore it? The same technology. perhaps the other planet is sped up, and they like it and don't want to reverse that, adding complications to the political aspect. So they need to understand what causes the "incedents" and engineer a way to transfer rotational momentum from a third source.

It may be possible to increase the earths rotational energy/angular momentum by building large/tall "solar vane/sail" structures that would basically turn the entire earth into a device similar to a "crookes radiometer". Then just sit back and enjoy the ride, while also hoping the entire atmosphere doesn't burst into flames.

Not too dissimilar to the increase in rotation of the asteroid mentioned in one of the previous comments.

Not the answer you're looking for? Browse other questions tagged science-based physics earth or ask your own question.

15
Could we still live if Earth's spin speed slowed down by 90%?
7
How would the earth be different if the crust was at most 1km thick?
5
How can I slow down Earth's rotation?
5
What if Earth was eaten by a giant slow moving alien creature?
2
Is there any way to tidally lock Earth to the Sun in its current state?

3
Life-speed of non-water alien life (much slower or much faster than on Earth)?
59
An infinite train circling the planet that never stops
11
What conditions would make rain possible in an O'Neill Cylinder?
6
Reversing rotation of Earth, effects on satellites and satellite-based communications
14
Aliens to play a mischievous space-time practical joke on Earth
6
A Nonlethal Time Dilation Field
9
How do I give my planet a stronger magnetic field? Playing with variables
3
Would this setup of a terraformed moon hold up?
4
How to get time to pass faster on another planet compared to earth?
2
Calendar-Worthy Events on a no-axial spin distant future Earth