There is talk of a better alternative to steel, and one among the subject is "palladium glass". Manhattan Gold & Silver sums up the backstory of p-glass's construction, written in October 2014:

Just a few years ago, materials scientists from the Lawrence Berkeley National Laboratory and the California Institute of Technology created a type of microalloy using palladium, phosphorus, silicon, germanium, and silver. When combined with glass, it removes its characteristic brittleness. On top of that, it’s stronger and more lightweight than steel.

How is it stronger and lighterweight than steel?

When force is applied to glass, shear bands form within it – which turn into cracks, which causes the glass to break. Since glass has a non-crystalline structure, shear bands and cracks can form very easily. Palladium’s crystalline structure creates microstructural obstacles that inhibit shear bands from creating cracks. When force is applied to palladium glass, many shear bands form, but they curl back on themselves. This gives the material plasticity, allowing it to bend before breaking. The result is a material of unparalleled strength (i.e. the amount of force a material can take before it deforms) and toughness (i.e. the energy required to fracture a material). It’s somewhat like a rubber band made of steel – it can readily bend and flex, but also stand rigid and hold its shape.

In OTL, unfortunately, the concept of palladium glass as the bone of a skyscraper's skeleton is currently reserved for the realm of science fiction, and here is why:

Unfortunately, the price of palladium and the difficult refining techniques required make palladium glass prohibitive to mass produce for the time being. Otherwise it could be a perfect material for fabricating vehicles and aircraft.

Now the Manhattan Gold & Silver article never mentions the idea of palladium glass being used for skyscraper-building, but considering the final paragraph, I don't think mentioning it would have made any difference.

But this scenario is connected to the alternate timeline of the medieval Chinese Industrial Revolution. The earlier you start, the likelier the odds of mass production. So let us now fast-forward to the point between 1920 and 1940, the first modern Golden Age of Skyscrapers. A steampunkier Industrial Revolution usually means larger, grander buildings, and that would require steel to put them in place. In the 1890s, the Industrial Revolution would be over and palladium glass would be put into experimentation, almost 600 years after the first modern skyscraper. By the 1920s, skyscrapers with palladium glass skeletons would become not just a reality, but a construction craze. Are 30 or so years enough to make palladium affordable enough for mass production? And could they be used as the skeleton of a skyscraper?

We've been aware of palladium for over 200 years, it currently has a selection of industrial uses primarily catalytic converters, but also used in everything from dentistry to mobile phones. However for your purposes you need to know production quantities.

Global mine production of palladium from 2011 to 2016, by country (in metric tons) 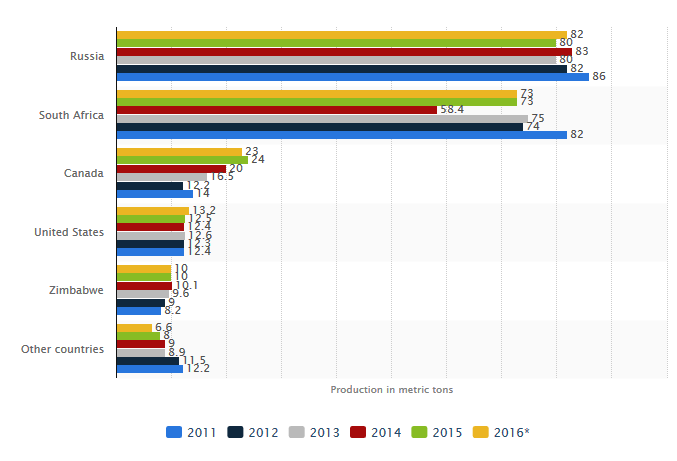 Compare that to iron 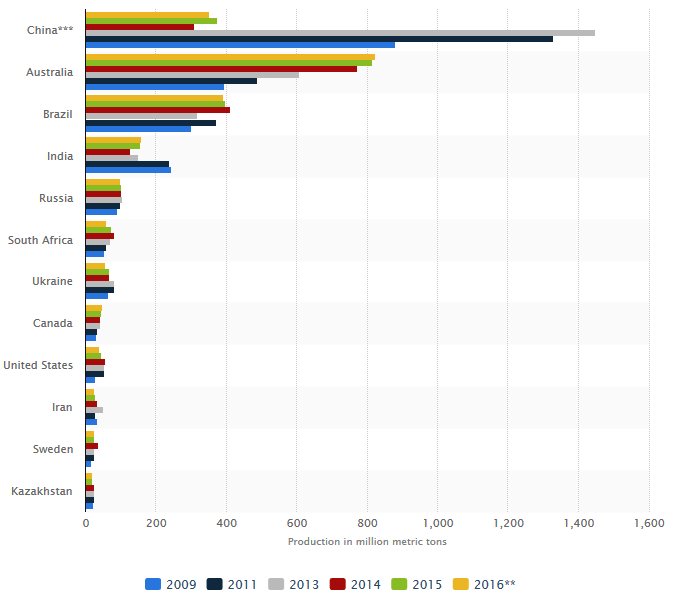 You should be able to see at a glance from the titles why palladium is not a practical building material. Its production is measured in tonnes globally and Russia is the largest producer with a peak of 86 tonnes in a year. Whereas iron doesn't list all the producers, only the largest few and they're measuring in millions of tonnes with China peaking at over 1400 million tonnes in one year.

Even with a few extra decades of production you're looking at a scale issue that is hard to comprehend. To say more iron is produced per minute than palladium per year just about begins to cover it. No matter how good your palladium glass, people will build with iron and steel.

30 years is not enough time. Rare minerals and precious metals do not become cheaper through mass-manufacture. No matter when your industrial revolution started, there is very little palladium on the Earth, some investors estimate less than 14 million ounces (very roughly: >400 US tons) has ever been mined. As it's uses become known it rises in value.

I have not found an article that revealed how much palladium is required in palladium glass, but I suspect you will either need to compromise on your metal ingredients or find a completely new way of making palladium, like synthesizing it through nuclear fission.

How is your space industry? Maybe they got lucky and were able to capture a palladium rich asteroid into low earth orbit. BAM, palladium is now readily available for construction projects!

Not the answer you're looking for? Browse other questions tagged reality-check alternate-history cities construction materials .

6
The Key For a Longer-Lasting, Steampunkier Industrial Revolution