How would Zeus throw thunderbolts if Zeus were actually using technology?

A fellow from the near future is sent on a mission to ancient Greece where he needs to impersonate Zeus. What kind of device would best approximate the mythical bucket of thunderbolts? Also, style matters - Zeus-impersonator needs to look appropriately god-like in a toga in a storm while throwing his bolts - merely pressing a button on a hand-held phaser wouldn't have the requisite effect on his worshipers.

It would look something like this. (I'll call your Zeus impersonator "Bob" for brevity.)

Now that Bob was standing in front of the propylaea which led to the Acropolis, a large crowd had assembled around him, waiting expectantly to hear the words of this unusual stranger.

"People of Athens," Bob said in Ancient Greek, having checked that his tiny microphone was broadcasting to the hidden speakers that he had planted around the gateway, "I am the All-Father Zeus, son of Cronus, chief of gods, father of kings." As his digitally amplified and deepened voice echoed off of the white marble, he grasped his modified flash-bang grenade in his raised right hand. The grenade, which was in the middle, was encased in a long tube filled with glowing neon, so that the "lightning bolt" appeared to constantly flash white-and-blue.

"I have come to [insert reason for impersonation]. Now bow before me, or I shall smite you with bolts of lightning. Come, who now defies the great god Zeus?"

A rather ugly-looking old man stood up.

"I am Socrates, son of Sophroniscus. What evidence show you, to your claiming to be the great Zeus? For I do not believe anything unless it has been examined." Around him, the crowd was slowly backing away from Socrates, fearful of the retribution that was sure to come.

"What evidence show I? WHAT EVIDENCE SHOW I?" As his voice rose, so did his hand, bringing the dreaded thunderbolt with it, depressing the hidden button to prepare the flash-bang to go off upon impact.

Socrates had but a fraction of a second to realize what he had done, and then everything went white.

The flash of light lit up the Acropolis. Across Athens, free men and slaves alike heard the roar of thunder, echoing and re-echoing off the Aeropagus and the Mouseion Hills. Back at "ground zero", Bob stood unaffected, having had earplugs in his ears and having closed his eyes at the moment of impact. While the crowd was blinded, he had slipped another thunderbolt out of his voluminous robes.

"Who defies Zeus?" he asked, quietly in a way that was at the same time threatening.

As one, the crowd fell to its knees.

Some sort of rocket launcher with an explosive warhead. The rocket engine provides the bolt, the warhead provides the thunder and flash. The M72 reaches effective range in roughly one second, so the effects will make their combined impression.

There is no need to defeat armor, so a smaller fragmentation warhead could be fitted. This allows a smaller rocket motor, which makes the entire thing lighter. Maximum range could probably go down, too. It could be possible to fit half a dozen into a bucket.

Or perhaps the M202 could be mistaken for bolts in a bucket.

As long as the people of ancient Greece were blind, gullible, or morons then using a grenade or rocket would work pretty well. My only response is that either your "lightning bolts" are abstractions or you've never seen/studied the area where a lightning strike (recently) happened. Lightning travels at speeds on the order of 100,000 m/s.

One of the fastest manually carried/launched missiles today is the Starstreak (speed over 1300 m/s). It would be theoretically possible to accelerate a missile in space so that it hits that speed (100 km/s) upon entering the Earth's atmosphere. Of course, this doesn't allow your actor to throw it.

There are both systems which have used lasers to ionize a path through the air allowing an electrical discharge. There are also wire-carrying rockets which allow the same thing. But again, neither of these systems will "look" like a guy throwing a spear.

I suppose you've heard what Abraham Lincoln has said?

So, I can't discount the possibility of people buying the "he threw real lightning!" story. I do believe that a skeptical observer would easily see through that. So the question is: how far from "real" lightning can you go, without people calling you out on it?

I personally like the idea of tossing a flash-bomb which hides the (near-by) launch of a rocket (unless you think a shoulder launch would be ok) which is targeted by either a drone or your hidden side-kick using an ir laser.

The pros of this idea is you're only limited by the number of flash-bangs you can carry (and if they look like glowing bolts while you're holding them (think of glow sticks), that could be a plus). To be clear, you'd have to be far enough away from the witnesses so that they wouldn't see (or if they did see it, wouldn't think it important) the residue of the flash-bang. So, it would have to be choreographed: you toss the flash-bang, it explodes no more than a couple of meters away and through the subsequent smoke cloud, comes an ir guided missile. Not particularly lightning like, but there you go.

So, the detonation when it hits the target wouldn't be "lightning-like" either, so there would be plenty of reason to not "buy" the story, if some pedant wanted to point out that it wasn't "real" lightning. But, hey, there's billions of people that believe the dead can come back to life. Perhaps an incendiary warhead would be better than a high-explosive one. At least then the strike would be mostly burned, rather than mostly blown apart. (ie a combo small hi-explosive, large incendiary warhead, understanding that your rocket isn't going to completely disintegrate, and so you will leave evidence at the scene.)

There are rockets designed to (mostly) disintegrate, but I'm not familiar enough with that (cardboard) technology to say whether the difference would be enough to use them. But hey, in a story, why not? You can have the thing mostly made of disintegrating components, leaving no evidence behind. (The accuracy of such a rocket could only be crude, I'm not sure it could be IR guided...)

Someone with advanced technology would throw thunderbolts by simply generating a massive electric charge and directing it where they wanted.

How could they direct that charge? By giving it a trail of ionized gas to follow, which is more conductive than simple air. That could be done by spraying ionized gas in the desired direction, or a directed electromagnetic pulse that would ionize enough air in the right direction, to give the massive charge a conductive trail to follow.

For a demonstration of this effect, look up the Apollo 12 launch. It was struck by lightning twice, when the ionized gas from the massive F1 engines created a 'lightning rod' to the ground, from thunderstorm clouds nearby. The Apollo 12 launch incident also spawned a nerd legend, when EECOM John Aaron uttered the words "SCE to AUX" after the lightning strike, saving the second moon mission.

I will tell you.

He uses laser filamentation to create a conductive channel across the air : 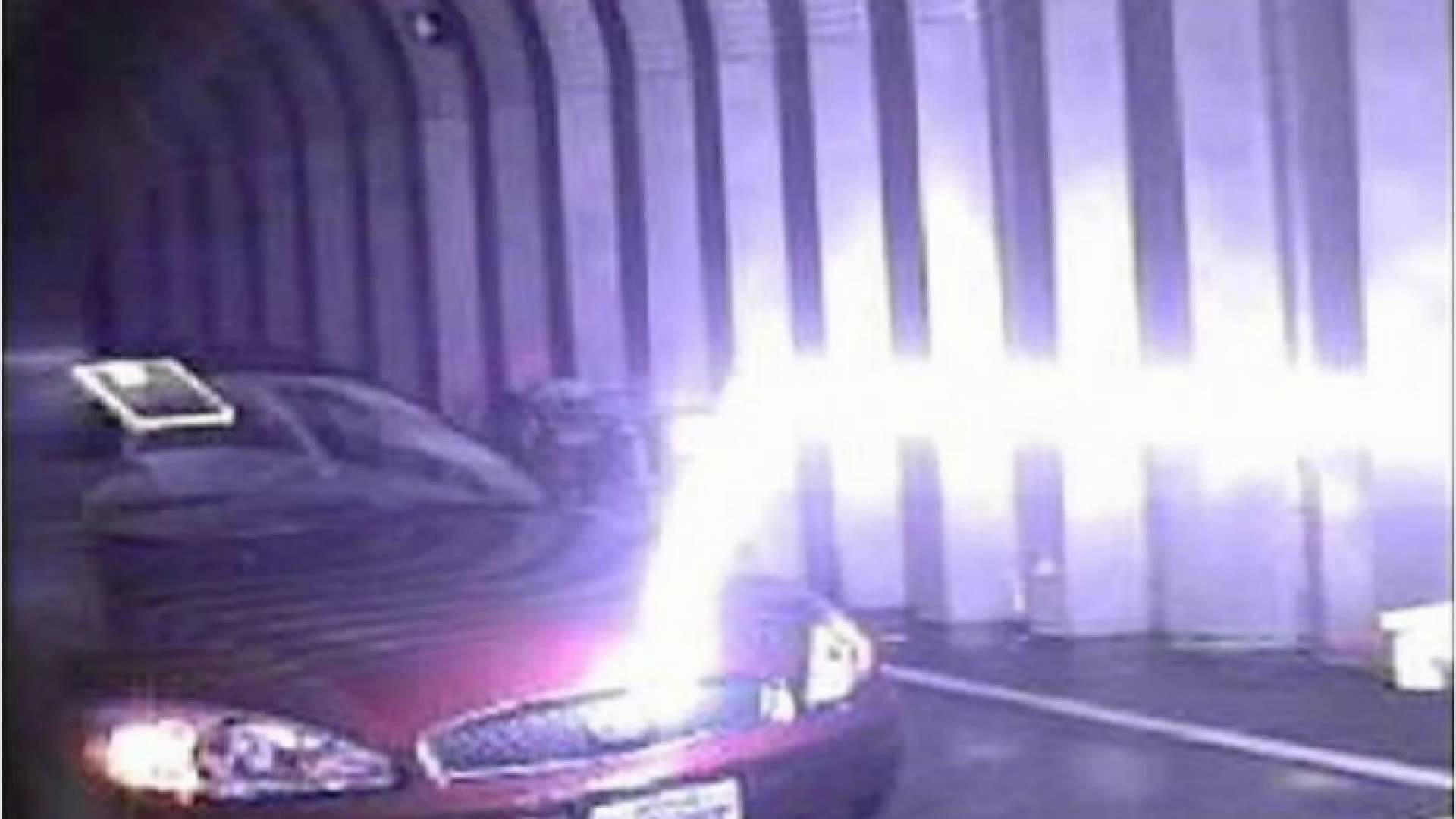 Air has a limited capacity to carry light. After a certain light density (created by compressing laser light pulses into terajoules packets) and frequency (blue is more ionizing than red, for one), laser pulses will cause air to break down and become electrically charged. This means that air becomes IONIZED. Ionization of air allows it to carry charge, like a electrical conductor. If you combine a high voltage source with a compressed laser pulse generator, you can discharge the high voltage source current across the ionized air channel created by the laser pulse, effectively creating on demand thunderbolts wich with to attack your target. Thats how a technological Zeus would use thunderbolts as a weapon.

Maxie Zeus, a supervillain in DC, use a lighting staff shaped like lighting. It can be done easily with an arc welder. In "Batman: Arkham Asylum" by Grant Morrison and Dave McKean he is plugged into electroshock machine that give him nice blueish glow.

Not the answer you're looking for? Browse other questions tagged technology weapons weather ancient-history gods .

7
Technology using only biomaterials
51
Pew Pew Lasers! What would directed energy weapons actually sound like?
71
What modern technology would be most revolutionary to ancient Greeks?
7
How to defeat the elven insects using modern technology?
4
Supposing gods were ubiquitous, would religion be widespread?
7
How would early and unlimited access to gunpowder change bronze age warfare and technology?
71
How to keep a military technology secret while using it?
5
A Roman-technology clock run by slaves - how to make it accurate
25
How would sailing be affected if seas had actually dangerous large animals?