This is a reality check: I want a planet with huge forests and a relatively (to Earth) high level of CO2, but I also want there to be very large areas of grassland, (savannahs) where we naturally evolve a human-like, upright bipedal species (as opposed to species adapted to tree dwelling and navigation). I don't want to force these savannahs into particularly harsh climates; I just want to know if there are natural reasons they could develop and exclude most of the dense forest. Is this a plausible planet?

Grass evolved to deal with grazing animals. Whether grass, something similar, or something totally different evolves will depend on the selection pressures and random luck. I don’t think the concentration of carbon dioxide has anything to do with it.

Likewise, the presence of grass doesn’t have anything to do with whether something human-like will evolve.

More importantly, nothing about the “high CO₂ levels” as the only difference of note will preclude things turning out like you want. Did you know that there were times when Earth had more CO₂ ? The thing to watch is to make sure the overall temperature is OK. It may prevent coral and other seashells from forming. The levels may have been different at different times in your planet’s geologic history.

Of course, the presence of grass and savanna as an ecological niche will shape the evolution of animals and other species, as well. Grass evolved to deal with animals grazing, and in turn supported animals that graze.

Grass is one of the first organism to conquer virgin soils, preceeded by lichens and followed by bushes and then trees.

Also having a larger amount of CO2 it doesn't mean all the places are favorable to trees growth. It may though vary the relative distribution of forests and grasslands.

Therefore I would say grass is still bounded to be present. 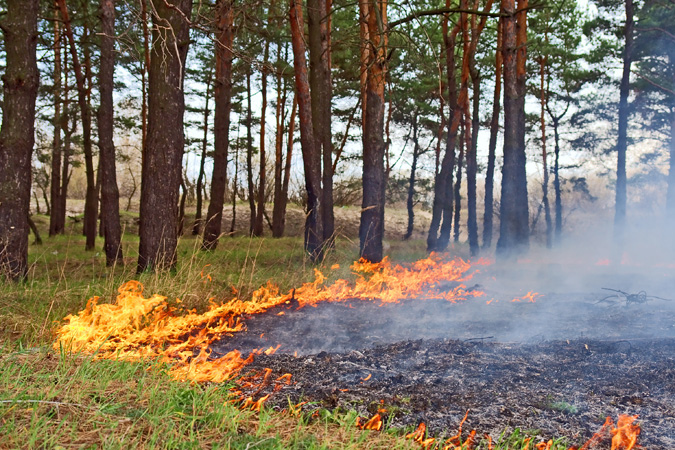 Wildfire has a reputation as a destructive force, but it often functions to maintain an ecosystem’s balance. Regular wildfires shape the makeup of vegetation by suppressing woody plants and favoring grasses. Because their growth structure is situated at or below the ground, and because fire moves quickly through grasslands, most grasses tolerate fire or even proliferate after a fire. Without fire, shrubs and trees would take over grasslands, effectively converting them to forest, and non-native vegetation would spread.

Lots of grasslands on many continents were maintained by fire: the main biomass of a perennial grass is underground, and fireproof. The biomass of a tree is above ground and burns. In a fire ecosystem grasses win, with the occasional fireproof tree here and there. 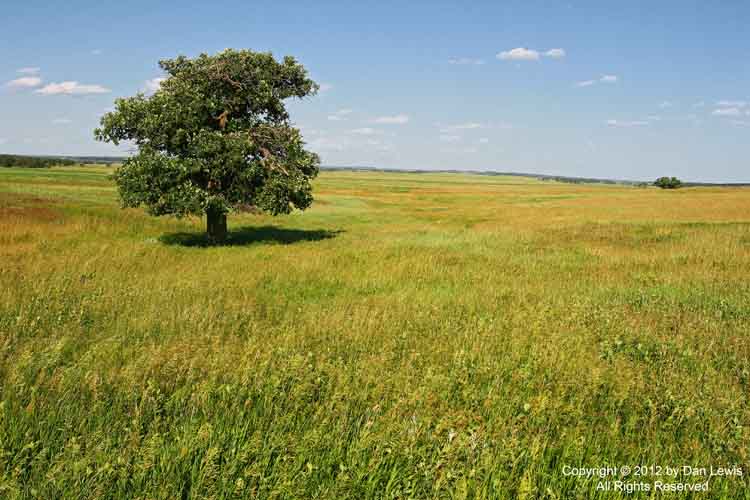 from http://wyomingnaturalist.com/land_prairie.html A bur oak (fire resistant) lording it over the grass. 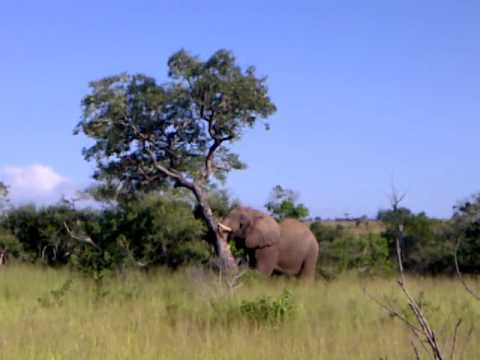 In Africa elephants push down trees and eat them, preventing forests from taking over grasslands. Not as important as fire I do not think but still: credit where due.

I humbly submit that flame elephants might combine the best of both worlds when it comes to grassland promotion. Flame elephants would be good for lots of other things too.

I will add that relatively constant intense grazing by large herds can also be responsible for creating vast grasslands; I recall an experiment done by students (must of been twenty years ago I heard about this) in which they fenced off an area about the size of an Olympic swimmming pool in a grassy expanse (with permission of the owner). It prevented cattle and goats from grazing that particular area. Within the year, they had volunteer (not intentionally planted) woody bushes and several young trees, just within their fenced area.

The hypothesis is that the seeds of trees will germinate in the field just fine, but the grazing animals mow them down before they get a chance to grow.

Now grass grows from the bottom; so cutting a leaf (blade of grass) does not kill the plant (although repeated cutting may starve it of what it gets from photosynthesis). So grass grows back after being cut by grazers. Trees and bushes, however, just die if the shoots are cut. Unlike grass, young shoots have very short and underdeveloped roots, and can be just pulled out of the ground; while mature grass can have deep roots, so just their leaves get ripped away.

By building their fence, the students protected the area from grazers and any lucky seeds making landfall in that area had time to grow.

Savannah can handle less rain than is needed to support forests especially very seasonal rain, savanah can hand long dry periods better than trees. Grass can die off and recover every year, trees don't handle this as well in warmer climates. so dry warm climates will develop savannah as long as grass have evolved.

Also savannah are not without trees it is just that there is large distances between trees or patches of trees. Savanna are also often prone to fire which helps keep shrubs sparse. You really do not need to justify savannah on your planet, savannah will fill in anyplace the trees have stayed sparse and/or small because of the lack of rain or poor soil water absorption, again provided it has evolved.

A common form of savannah is grass or scrub cover the majority of the land and trees are tightly packed near any water sources like rivers, lakes, or lowlands where water will collect. These are called gallery forests. Notice how much grassland exists in the picture below. This would qualify as a savannah. 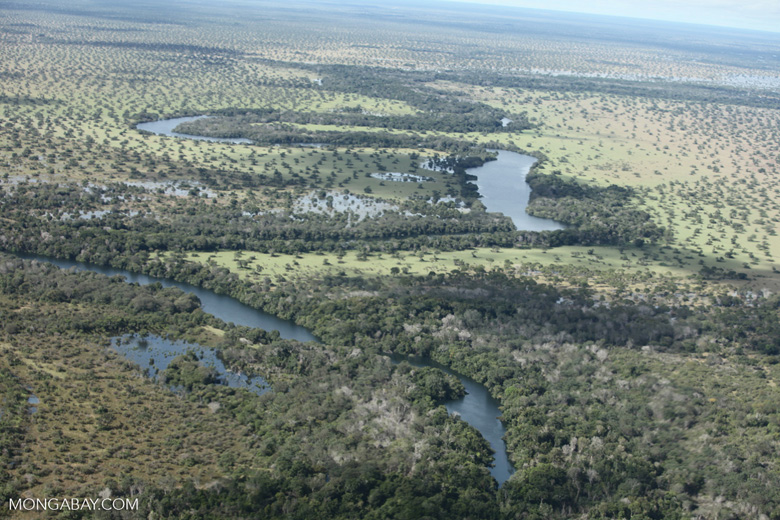 Height can be your deciding factor: there are plenty of highlands without trees but with grass, e.g. this Bolivian altiplano: 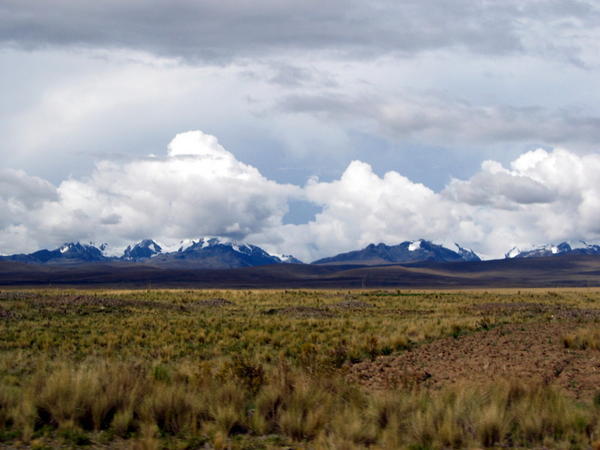 As others have mentioned, grasses flourish wherever there are large, grazing animals, frequent forest fires, or other factors that might mitigate the growth of trees. As pioneer species, they also fare better in harsher climates where sunlight and water might be less plentiful, making tree growth less feasible.

One important thing to keep in mind is that the age of your forests is really important. Old-growth forests are not the diverse biomes that some people imagine. That's because the tallest, biggest trees eventually crowd out the competition and monopolize their ecological niche. What that means is that in ancient forests, there's often just one or two species of trees and virtually no undergrowth of any kind. There might also not be any animals whatsoever, because there's no food. (We don't see this often on Earth anymore, of course, because most old-growth forests were cut down in the 18th and 19th centuries.)

This type of environment could exist alongside grasslands, of course, but any patchy interspersion seems unlikely. Many trees reproduce with windblown seeds, so unless there are large grazing animals to eat saplings, any nearby grasslands will eventually be seeded with trees. From what I understand, younger (and more tropical) forests tend to be more biologically diverse.

I figured I should mention Sheri Tepper's 1989 sci-fi book Grass, which is set on a world covered in (spoiler alert) grass. I know that's not the sort of biome you're describing, but maybe it could provide you or others with some inspiration.

And one cool factoid to add: Bison evolved to generate an enzyme in their saliva that stimulates the regrowth of grass that they've been grazing, ensuring that there will always be food as they cycle through their grazing grounds.

Not the answer you're looking for? Browse other questions tagged reality-check planets flora or ask your own question.

12
Would co-orbital planets with very similar convergent evolutionary paths be possible?
31
Sleeping on planets with very long days
21
Is it possible to have a habitable planet unsuitable for agriculture?
6
Could Bamboos Evolve Into Trees In the Past?
24
What effect would liquid sulfur oceans, sulfur dioxide in the atmosphere have on visibility, sound propagation and other environmental information?
11
Carnivorous wire grass a.k.a. Bloodgrass
11
Goldplating Planets with Kilonovas
3
Is it possible to have a fictional home-bearing huge tree?
9
Desert planet with forests at the poles