How feasible is a 3-way war?

I want to start writing a war-based story. The 3 groups in my story could be the official Government, a Revolutionary/Rebel force (who are "good guys" nonetheless), and the bad guys. Alternatively, it could be 3 groups fighting for control of some common resource (or chasing a MacGuffin), but who worship a different God each.

The key element in either case is there is a strong mutual hate between the 3 groups, and cooperating with either of the other two is a religious/ethical stigma. In other words, two groups teaming up against the third is ruled out.

I was wondering how realistic such a 3-way war would be? Can such 3-way hostilities be sustained for long? If two sides are already fighting, is it even possible for the 3rd group to join the party, fighting both at once without teaming up with one side or the other? Are there any other considerations or tropes I should look for when setting up the plot?

I looked at the Second World War as a close enough real life reference, where the Nazis and friends, USSR and friends, and US and friends had similar sort of mutual distrust (to put it simply), but the US team and USSR team ended up teaming up (sort of).

The other real life reference closer home (timewise) is the complicated situation in West Asia, but that involves n-way hostilities with variable n, and dynamic teaming, so doesn't give me much insights. :-) 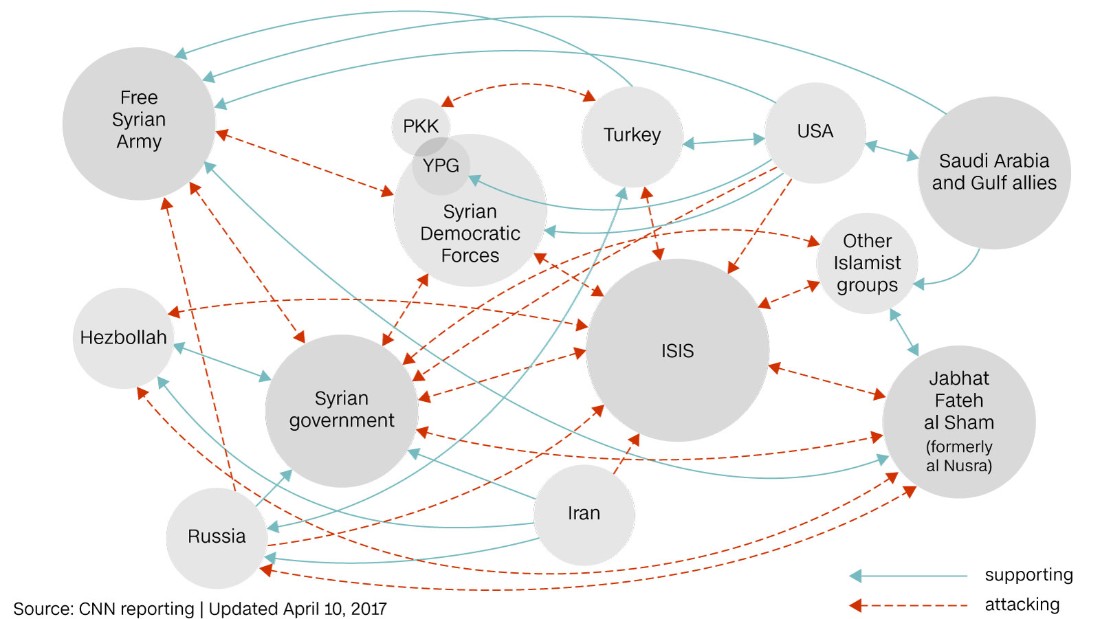 Source: CNN: The free-for-all in Syria will make your head spin

There may be long-term hostilities sparking between all of the parties, but at any given time no one would want to fight war on two fronts. So, if both A and C are fighting B and there is a conflict between A and C, their leadership would have to think hard if full-scale war worth pulling out resources from a "primary" conflict with B. It might be worth only if some sort of ceasefire can be reached between them and B.

History tells us that in multi-prong civil conflicts (like the one in Syria now, for example), warring fractions tend to form shaky alliances rather than keep fighting with everyone. Those alliances can break up and reform at any moment, and fighting is going on until some of the fractions are eliminated or they come to a more permanent agreement with each other.

The example that you used concerning WW2 requires some attention. Regardless of all officially proclaimed ideology, in simplified, but not whitewashed history it was until 1941 3Reich and the SU against the Allies, and later 3Reich against the SU and Allies. Moreover, both Hitler and Stalin were worried, that quite a few German officers were toying with idea of disposing of Hitler and negotiate some peace or even alliance with the Allies. (In not simplified history the conflict was much more multipolar with more changing sides and alliances between smaller players)

Such 3 side war with no chance for cooperation could actually almost become a long term stalemate. In the interest of all sides is letting the other to exhaust their forces and attack at the end. So each should defend his fortress and attack mostly when there is a chance for proper loot.

You would need a very hard win condition. One where a 3rd party could not sit out. Let's say in a fantasy setting there is an artifact that if calmed one would become a god.

The only choice each faction has is to fight and win.

Use the worldbuilders privilege to your advantage

On a level playing field, a 3 way war is probably very hard to sustain, for reasons given in several answers.
However, you have the advantage of defining the map here.

Divide your world with an obstacle, like a mountain chain. Place Fooland on the north side, Baria and Bazistan on the south. Join the two sides with a road through a mountain pass. Place a stronghold in Foolands control at the south end of the pass. Make both Baria and Bazistan more powerful overall than Fooland.

The three are eternal enemies, more or less constantly at war. Baria and Bazistan are fighting back and forth to the south, while Fooland tries to extend its reach from its stronghold battling whatever power reigning the plains south of the pass at the moment.

Foolands forces are sometimes pushed back to their fort, but they can hold that indefinitely, even against an hypothetical alliance between the others. Their forces are however too small to really tip the balance between Baria and Bazistan.

This way you could (at least in fiction) have an eternal three way war.

Oh, it's absolutely possible. If the government is unpleasant enough to spark one rebellion, why not two? The issue you're going to have is keeping the two rebel groups in play at the same time without joining forces or having one destroy the other.

So ... how about Rebel Group A is fighting for the right to practice their religion, which is being suppressed. Rebel Group B is trying to set up a Communist state. The government is a corporatist kleptocracy with a different religion. So each group has something to dislike about the others. It doesn't have to be completely cut-and-dried, though. You could have a guy from A seduced by the egalitarianism of the communists. A gal from B might have a religious awakening and start sympathizing with A. Government agents might try to temporarily ally with B to disrupt A, or vice versa (this won't end well, but they might try it).

This will not be a stable situation, but that's okay. You can get it to last long enough to have a story in it, until one group comes out on top.

The current war in Syria has four factions: the Syrian government, a resistance fighting that government, Islamic resistance (ISIL), and Kurdish separatists. Except maybe for the resistance and the Kurds, each group is hostile to the other groups and have been fighting for years.

I don't think it could never ever be good strategy to attack 2 groups that were already fighting each other, think about a few possible scenarios -

Having said those things - anything can work in a book and some of the best novels are the ones that make something happen that you would never think could happen - provided they're very well thought out and written well.

What could work is if the third group attacked the other two secretly and framed the attack each time so they would fight each other to bits and the third group could take advantage of their destruction of each other - carefully played this could work extremely well if the third group is the weaker group because it could always attack the stronger side, while framing the attack as from the other side. This would create a continuous balanced war where the resources of both sides would keep getting drained until they were too weak to fight.

One real life example that was a 3 way conflict for a while was fought in Columbia in the 1980's. The Columbian government was engaged in a very vicious war against the Marxist FARC (Fuerzas Armadas Revolucionarias de Colombia or Revolutionary Armed Forces of Colombia) as well as one against the Narcos, billionaire drug dealers with their own mercenary armies who also used their money to "purchase" the loyalty of the locals they were embedded in by building hospitals, schools and offering "justice" not tainted by the corrupt police and official judiciary.

FARC, as good marxists, were committed to eradicating the scourge of the drug trade to save the workers, not to mention seizing the wealth of the Narcos, so they also fought the drug lords. Both the government and FARC discovered the narcos had much greater resources....

Eventually, FARC came to the conclusion that hiring their fighters out as guards for the narcos was a good business decision, and the Narcos were happy to only have to fight one enemy, as well as having many more guns on their side (especially since the United States was now taking a very active role in the war as well at that point).

This pattern has been repeated in other conflicts, for example during "The Troubles" the PIRA took to robbery and extortion to continue to fund their "cause", and essentially absorbed a lot of local criminal gangs in the process. They were also fighting the paramilitary Ulster Volunteer Force, the Royal Ulster Constabulary as well as the British Army, and fighting police does require a different mind and skill set than fighting soldiers. The ever shifting constellation of fighters and groups in the Syrian civil war encompass a multitude of players, and even people who seem to be on the same side, such as Russia, Iran and Syria have rather divergent aims, although mutual cooperation currently provides a better means of achieving their individual goals. On the other side we have a witches brew of ethnic, religious and secular groups, backed by a constellation of outside forces ranging from the Gulf States to Turkey to the United States, as well as "self funded" and self sustaining entities like ISIS and the various Kurdish Peshmergas, all with disparate and not always comparable goals, so there are far more than just "three" players in this game.

Not the answer you're looking for? Browse other questions tagged reality-check warfare .

5
Help/Advice With Making My Designated “Good” Faction Read As More Obviously Good, And Making My Designated “Evil” Faction Read As More Obviously Evil?
28
How would societies be if created and populated only by young people?
45
Would a 100% simulated war be a way to solve national conflict?
27
Could a world nation use organized, bounded war as a way to keep the soldiers trained?
28
War eagles, feasible?
6
Where to live on a binary planet?
9
How practical would war boars be?