Just out of curiosity, could a large constrictor such as a python or a boa evolve to rely on camouflaging itself as a branch, with the right colouration and positioning, in the jungle canopy and ambush its prey (prey such as primates, rodents or birds etc).

After all, we have discovered a genus of colubrid snakes, the vine snakes, which through natural selection have disguised themselves as vines to ambush unsuspecting prey.

So could a constrictor, a python for example, evolve to mimic branches to catch prey, if so what traits could the snake need to blend in among the trees and how could such a large snake support its weight while hanging from the tree trunk?

Here's the only decent image I can find that shows it camouflaging itself as a branch: 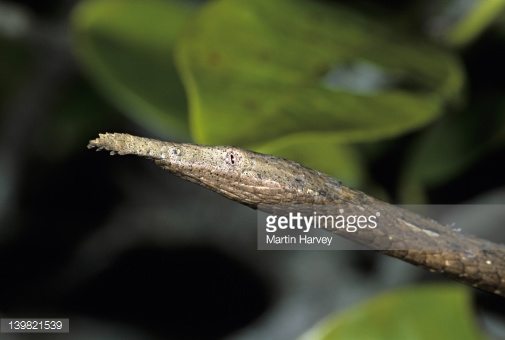 It wouldn't fool our human brains (which are particularly good at spotting snakes), but it is good enough to fool its intended prey. 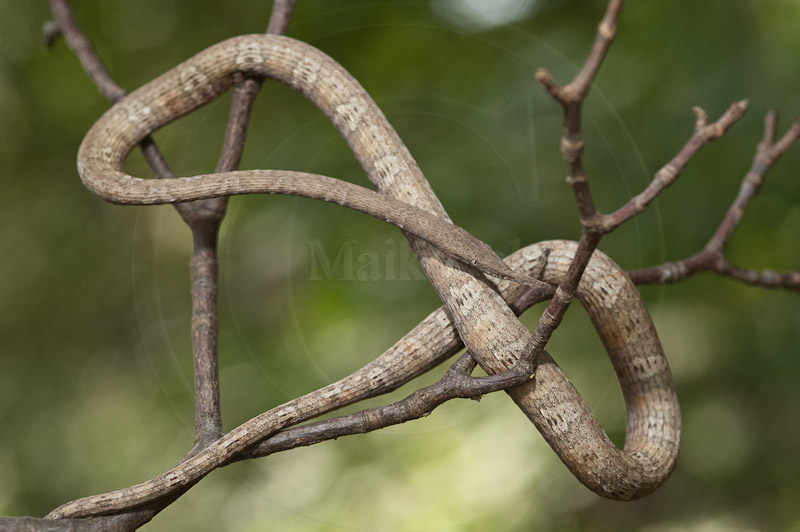 I don't see why not.

There are already snakes that mimic branches. The twig snake is just one example. Pythons and boas are already ambush hunters. All you need is for a constrictor snake to look like a branch and you are good to go.

Some arguments could be made that since such a snake doesn't exist that it could be sub-optimal for a large snake to look like a branch when a more splotchy pattern will do the job well enough. I wouldn't worry about it unless you're writing a bio paper.

Like a branch?
Probably not. Constrictors are much too big and heavy to hold the appearance of a stiff object. The best you could make them do is appear as a growth on a branch, e.g. the Tree Boa or Tree Python.

A few different things are needed for camouflage:

If your world has a major boa eating predator species (like maybe giant eagles) then the disguise would not only enhance the snake's predatory capabilities, it would also provide a concealment defense. This would make the adaptation much more likely and thereby much more believable.

Not the answer you're looking for? Browse other questions tagged biology creature-design evolution or ask your own question.

18
Evolution of ophidian sapience and caudal tool use
5
Could a branch of canine creatures (instead of apes) evolve into humanoid animals?
7
How would a giant marine snake-like creature survive?
6
How can I get a giant non-marine snake?
9
Could a Hoop snake actually roll like a wheel?
4
Snake with a head on both ends
6
What practical forms can a “branch-tailed” organism have?
5
The plausibility of a pack-hunting carrion-eating snake
3
Why would a venomous snake squeeze its threat non-lethally?
3
How fast could snake-people move