Given a zero-G environment (such as a modern space vessel) how would a carbonated beverage react? Please address one or more of the following:

We don't have to guess or speculate about the science. The good folks at NASA did it, and "The result can be a foamy mess!"

"How do you dispense a beverage (in zero-G) and keep the carbonation in solution until the person is ready to drink?" Stodieck asks. "That's the challenge." Changes in temperature and pressure, or even physical agitation of the beverage as it's dispensed, can cause carbonation to come out of solution prematurely. Because bubbles don't rise in free-fall the result can be a foamy mass. 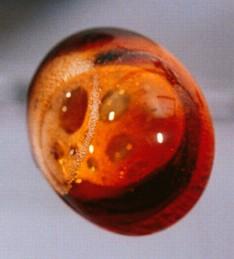 NASA does not currently take coke into space. In addition to the technical difficulty, it is very difficult to burp in space. Normally, when you burp the gas goes up and out of your stomach. In space there is no up.

NASA was not kind enough to post videos of the original coke experiments from the 80s on Youtube. However, this beautiful video shows an effervescent tablet put into a drop of water in zero gravity. In this video, an astronaut discusses the science behind a very similar experiment.The bubbles form inside the effervescent droplet and slowly move around. When two bubbles collide, surface tension pulls them into a single large bubble. After a few seconds, there are a few large bubbles with smaller ones packed in between. This is somewhat consistent with the foamy mess described by NASA.

Not related to the question, but super cool. Skip to 6:10 in the second video and you can see that when you give the bubble mixture a gentle circular stir, the spinning motion forces the water to the outside and the bubbles to the center. You can then suck the bubbles out with a syringe.

I captured a couple of stills from the second video and used them to estimate that the droplet's volume roughly doubled. This means that the droplets in the video had a roughly equal amount of liquid and gas. (This is not precision math, I bold the word roughly for a reason.)

The ratio of liquid volume to gas volume is important. Coca-cola generally has about 3 liters of gaseous CO2 per liter of water. This is possible because the CO2 is stored as liquid carbonic acid, which is much denser than the CO2 gas. When you open a coke can the carbonic acid starts turning into gaseous CO2. When coke is warm, this happens faster. If roughly 1/3 of the coke's carbonic acid turns to gas quickly, you will get approximately what the videos show.

In orbit You would have no gravity, but You have air pressure, this means bubbles would form, more or less, as they do here on stable ground.

Main difference would be bubbles won't try to "rise" because they can't decide what direction is "up" ;)

In truth the liquid (water, Coke, whatever) that won't try to go "down" dislodging the lighter gas.

Since there's no gravity keeping the liquid down it is very unlikely someone is crazy enough to leave a liquid mass "unattended" (carbonation not withstanding).

Left to itself a liquid mass is held together only by surface tension (we ignore gravity pull, which is several orders of magnitude weaker). This is more than enough to hold together droplets, but is easily overcome as mass increases and the spherical drop undergoes larger destabilizing forces.

In an ideal world (absolutely no perturbation) liquid would assume a spherical form to minimize surface.

Carbonation would add bubbles enlarging the sphere, but bubbles would remain static due to liquid viscosity (they are far too large to participate to Brownian movements). If, however, two bubbles would came in contact (come to a distance of a few intermolecular lengths) then the bubbles would fuse together (or release the gas outside the sphere, if near surface).

I repeat: this is not realistic for sizeable masses of liquid as the "no perturbation" clause would be very difficult to maintain.

A sealed can would contain a mixture of liquid and gas not separated by sedimentation due to gravity.

Opening such a can would release (some of) the gas in liquid solution with the net effect of increasing the volume of the mixture, propelling it from the opening (and pushing the can in opposite direction). Highly carbonated liquids would resemble a foam, but would decay due to bubbles being near enough to interact (liquid is in movement).

Anyone doing such an experiment in a real space station would have to clean the mess first and then face consequences.

Not the answer you're looking for? Browse other questions tagged chemistry zero-gravity or ask your own question.

13
What could cause infertility between humans living in gravity and humans in space? How could that cause speciation?
6
What forces should I consider for my hotel room on the Space Elevator?
3
How do I store Helium in a large space colony?
87
0g pool: can I keep a big ball of water in space?
9
Outer Space Flamethrower
22
Where would space habitats get their oxygen from?
11
How would crystals be different in hyperbolic space?
25
Chlorine Trifluoride as a Space Weapon?
1
Hidden specks will blow up the world if overheated: how bad a thing is this?