I've been reading here for a little while, but this is my first question. I am trying to come up with either a concrete set of numbers for a single answer for a binary planet system, or a simple formula that allows me to play within a range of acceptable numbers that answer my question. Math and I don't really get along anymore, so the less complex your solution, the better. Even a solution via simple 3D modeling / illustration on spheres or geometric drawings is welcome if it also provides numbers that fulfill the solution.

ALSO I'd like to keep this within the realm of plausibility, so sources for creating my system are listed after the question. I don't mind if the science pushes the boundaries of what we know. Unusual, rare, unlikely, and unique solutions are welcome; impossible ones are not.

Here are the shadows I'm trying to achieve:

Figure 1: The two possible shadows cast by each planet when all three bodies are in alignment 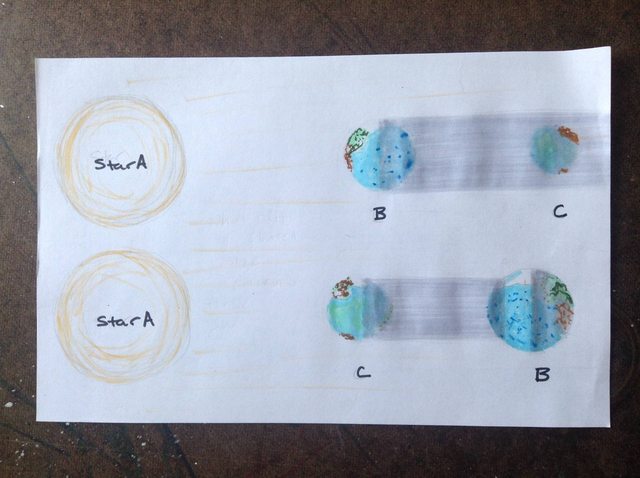 I'm going to leave my inaccurate drawings above for now because they better illustrate the landmasses and ocean areas on both planets. I'll replace them when I'm able. More accurate yet simpler sketches below along with (hopefully) improved wording.

Is this plausibly realistic?

I simultaneously hope this question is not too long and that I've provided enough info. If not, please me know what I can to do improve.

(note1) ~0.5 solar masses.  See Habitable Planets for Man by Stephen Dole (second edition) American Elsevier Pub. Co. - 1970 pg. 81.  “For a special rare class of planets with extremely large or close satellites, there is an extension of the lower permissible primary mass [of the parent star] down to 0.35 solar masses.” 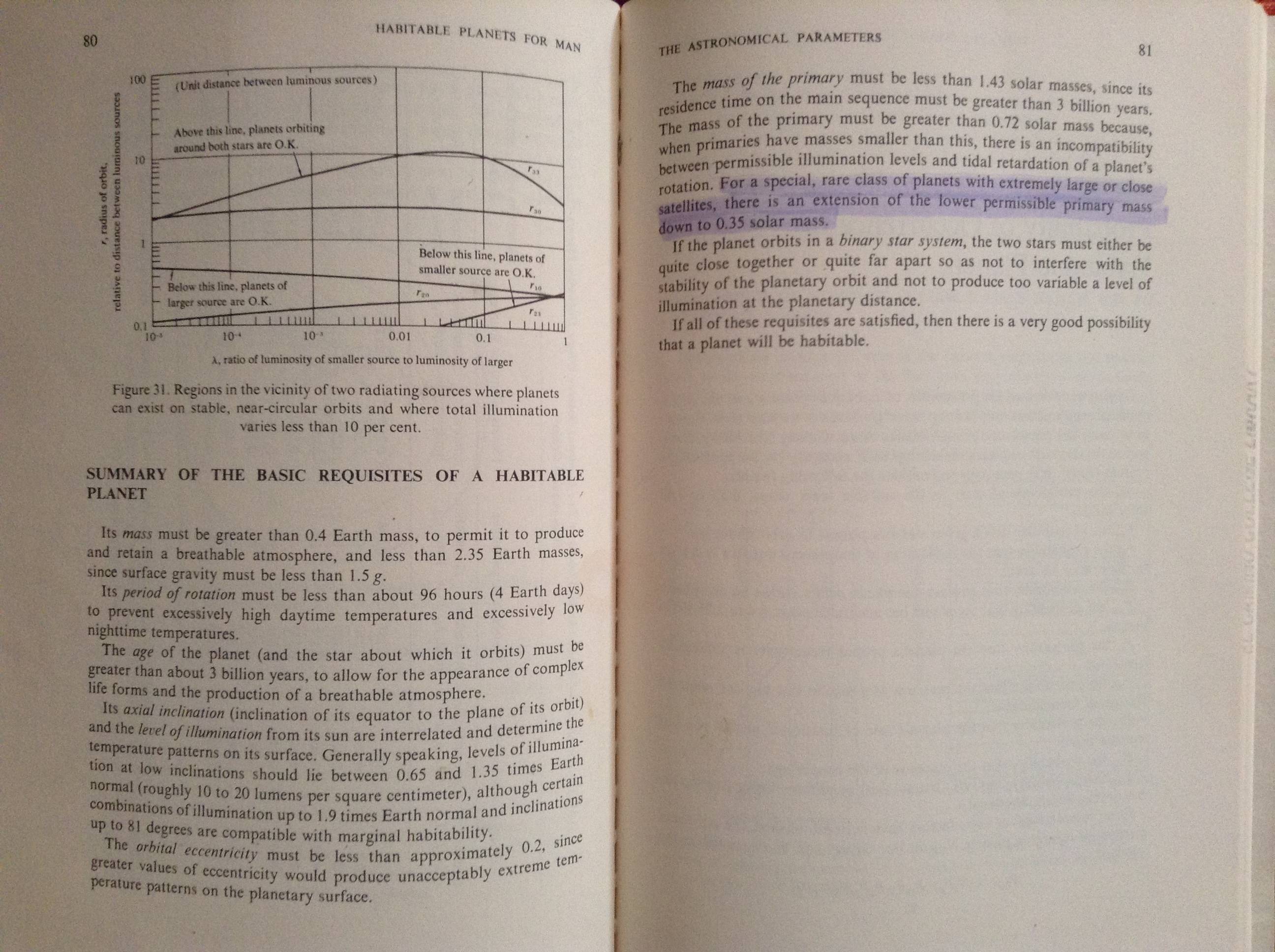 My star falls well with this range, and the binary planet system fulfills the large/close satellite requirement.

Yes, this arrangement is possible. The rest of the answer is how to figure this stuff out:

If the angular diameter is the same as something behind it, they will perfectly block each other. The relationship is:

I've made a little diagram showing you your situation: 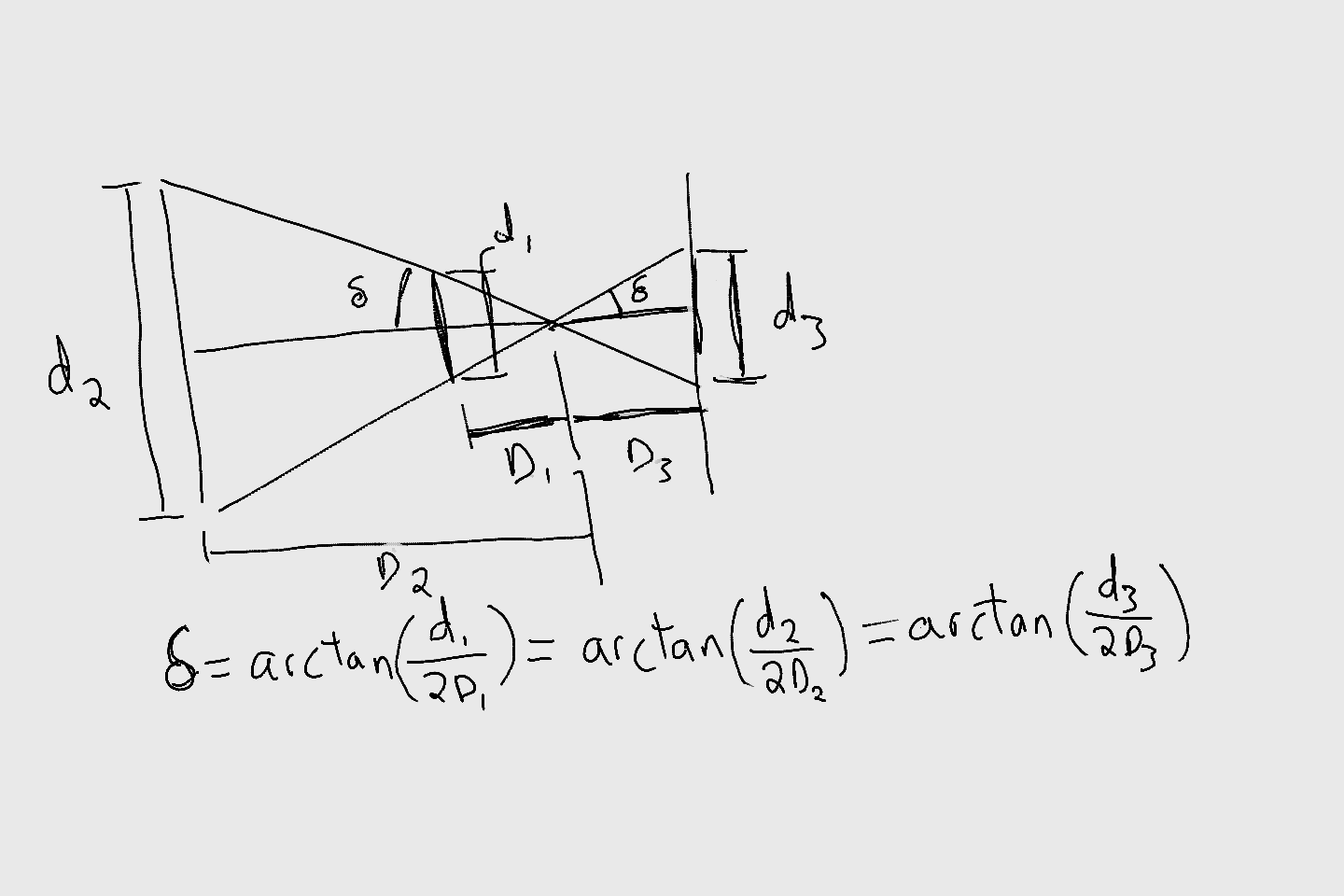 You should also note that sum $D_1+D_3$ is not (always) the distance between the planets, but the distance between the planet making the shadow and the edge of the shadow on the other planet. Also, this point which everything is measured from is not the point about which the two planets revolve. (That point depends on the mass of both bodies.) Also, it should be noted that $D3$ is really an absolute value- the shadow (d3) could be going the other way, inside the cone.

For case 1, where the big planet overshadows the other one, the smaller planet's radius must be less than $d_3$ and $D_1+D_2$ is (at least) the distance between the two planets.

For case 2, where the small planet puts a shadow on the large one, the distance $D_1+D_2$ is the distance between the small plant's center and the center of the ring formed by edge of the planet's shadow. To make a ring, the larger planet's radius must be larger than $d_3$

Using this information, you can figure out what the diameters and distances of your planets should be.

Not the answer you're looking for? Browse other questions tagged reality-check planets hard-science habitability eclipses .

4
What would a binary black hole look like from the surface of a planet orbiting that system
20
Creating a realistic world(s) map - planetary systems
19
Making doomsayers right - a moon(s), planet alignment that matters
5
Can this planetary system remain stable?
2
How long is a solar-solar eclipse in a Binary Star System?
5
Could 2 eclipses be visible simultaneously in the same area?
2
Longest possible eclipse in double star system
9
Is there a website that will run orbital simulations because I don't have a PhD in math
3
How would the reflection of sunlight change the day / night cycle of a binary planet system?