The Moon has a magnetic field instead of the Earth; what are the changes in navigation?

I'm curious as to what the implications to any navigation system are:

Will their compass change shape (as being spherical), or might they dump the compass alltogether and use other navigational methods instead?

The Moon will have a north and south pole along its axial tilt (similar to Earth). You don't have to worry about other adverse implications, like solar flares scorching Earth.

If one does not need to care about adverse effects due to the lack of magnetic field around Earth, then the question is essentially "what if there were no magnetic north/south pole" as this will be the major thing which affects navigation. The short answer is that it would be "same, same, but different"

If we disregard the fact that no magnetic field around the Earth means that there would be no humans around, as tj1000 points out, then there would likely not be that much significant changes (as long as the world would work exactly the same as now, but without a magnetic north/south). Humans navigated by stars, landmarks and several other tools long before they discovered the magnetic north and would simply continue to do so without a magnetic compass.

Navigation largely means "at sea"; throughout the history the way to find ones way have been the hardest at sea where there is nothing but water to look at and everything looks the same. Navigating on land can be done entirely by landmarks and the same goes for aerial navigation (since high altitude flying and flying cross large bodies of water is a relatively recent "fad"). This means that the majority of the tools have been used on boats, but several of them were developed for astronomy before they were discovered to be useful for navigation.

How about the influence of the moon?
I believe that JDługosz's answer is correct: The early compasses would probably have been to weak to pick up the influence of the moon and, thus, never invented. If it were possible to build a device which points to the moon, then it would be highly difficult to navigate with it as fixed point as it travels too fast when the planet spins (unless one can see the moon, then one have no clue if it's aligned with where one wants to go) - it's safer to use the sun or other stars as reference points, and that would likely be the way to do it.

Other implications with a lack of magnetic field
Exactly which changes in science there would be from not developing the compass is impossible to say; there is a risk that electromagnetism would never be discovered, but since magnetism itself would still be around, it's unlikely that there would be more than a delay in it's discovery (magnetism were probably discovered with the discovery of the early compass, but the magnetic properties would have been discovered eventually).

As long as there is not too much changes in science, there would still be advances in navigation, inventions such as the gyrocompass and GPS do not rely on a magnetic north and are inventions just waiting to be discovered. However, in reality, we wouldn't be able to discover electronics without a protective magnetic field around us, so exactly what could be discovered depends on how much reality you want to have in such a world.

Thus, the answer lies somewhere between "there would only be some delays in discoveries, otherwise the world would largely look the same" to "our inventions would never improve past renaissance technology". As for navigation in itself, it would for sure be tricker to navigate in a dense forest without a compass (or GPS...), but seafaring and flying would likely not be much affected. In reality, though, tj1000ng's answer is correct: there would be no navigating humans around.

you have to keep in mind that the magnetic field is useful for navigation since it provides a fixed point of reference, the North.

Once this fixed point of reference is known, you can further proceed with navigation.

The Moon has a considerable shortcoming under this point of view: it is not fixed in the sky, but keeps moving around. To normalize its position as reference one would need time tables computing it at every time of the day.

This would be, to put it mildly, cumbersome.

The absence of a strong magnetic field on earth would eliminate the need for navigation, because such a condition would result in the earth having very little atmosphere, and be incapable of supporting life as we know it. No people, no need for navigation.

This is the reason Earth has a much more dense atmosphere than Mars, as Mars does not have a strong magnetic field to keep the atmosphere from being blown away by 'solar wind'.

I don't think any compass built with ordinary technology would be sensitive enough to respond to a magnetic field from a smaller body a quarter million miles away. Magnetic Compass would not work for
navigation.

Look at the solar compass and the older sun compass used by Vikings! 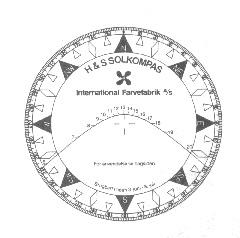 The Vikings also used polorizing crystals to judge the sun’s position in the sky when it was too overcast to see it directly.

At night, we would have the north star. At day, we would have the sun. While the sun moves quite fast across the sky, a clock would not really need to be very accurate (and it can be ) to get indication of where north and south are. Your typical contemporary decorative hourglass can be expected to be accurate withing +/- 10%. But there were also precision hourglasses: "Not until the 18th century did John Harrison and his son James, come up with a marine chronometer that significantly improved on the stability of the hourglass at sea. Taking elements from the design logic behind the hourglass, they made a marine chronometer in 1761 that was able to accurately measure the journey from England to Jamaica accurate within five seconds."

Instead of "the Earth has no magnetic field and th eMoon has" (basically making life on Earth impossible, but maybe possible on the Moon...), a better premise would have been to have no ferromagnetic material available for navigation purposes. Like some kind of rust-germs, which "eat" (degrade) ferromagnit stuff, or ferromagnetism is a "royal" privilege and only kings are allowed to own ferromagnetic materials (and every owner of an iron rod permanently risks receiving a death sentence in case this rod gets hit by a lightning or such).

To find north from the apparent sun's position:

You also need to roughly know your location on Earth and the current date. For any date and location, you can compute the apparent position of the sun in the sky for any daytime time. Or record the positions over the course of half a year for a certain location and use a table.

A trivial case: at local noon, the sun is in the south (assuming you are on the northern hemisphere). That is also when it has the highest elevation (that was used to find out the a ship's current latitude). Of course, finding the north direction just once a day is not sufficient. But with the pre-computed/pre-recorded table of sun positions, the apparent angle between the sun and north can is known for any daytime time.

Actually a good point: maybe the lack of a magnetic indicator for the north direction would have sped up the development of the marine chronograph.

Not the answer you're looking for? Browse other questions tagged earth-like moons magnetism navigation or ask your own question.

4
What if we can feel magnetic field?
4
What would Earth tides look like if the Moon was in a polar orbit (instead of an equatorial orbit)?
12
How would living at a pole affect mapping and navigation?
1
What rough climate and/or biome classifications would I assign to a planet with 31.1 degrees axial tilt?
25
What would be the side effects of a massive, strong magnetic field?
11
What is the most powerful magnetic field a planet could generate?
2
Would navigation work if the magnetic poles were located at the equator?