How realistic are ice plants?

How realistic is it that in the future someone invents plants that can live on top of the Antarctic ice sheet or are floating on ice like in the Arctic? 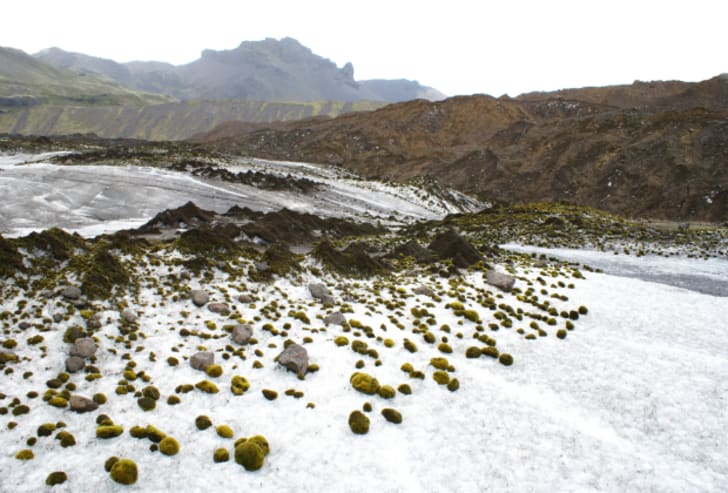 These rootless,restless plants form around a pebble, then synchronously roll about on the bare ice. The above linked article describes the many other creatures that find refuge within. But it is not clear what is propelling the movement of the glacier mice.

Together the team analyzed the data of the moss balls’ movement and found that they roll about an inch each day. The moss balls seem to insulate the ice below them, so as the glacier surface melts, each ball is sitting on a small pedestal. Eventually, it tumbles off.

"The whole colony of moss balls, this whole grouping, moves at about the same speeds and in the same directions," Bartholomaus tells NPR. "Those speeds and directions can change over the course of weeks."

He explains that herd of 30 moss mice that they observed first moved slowly southward before accelerating west, and then losing speed. Previous research using accelerometers had shown that the balls roll, and that the balls are green all over suggests that all sides get sunlight at some point. The new data show that the moss balls don’t move randomly—but the researchers couldn’t yet deduce what’s driving them.

So no need for invention. These are plants, not algae, and they live on ice, fair and square. They must get nutrients from the air like epiphytes. Water is tricky too. Very cool "critters"!

Ice sheet as found in Arctic and in Antarctic is basically solid water with some dust particle. Not enough to sustain anything bigger than a monocellular organism (sometimes there are massive algae efflorescence like the one in this picture: 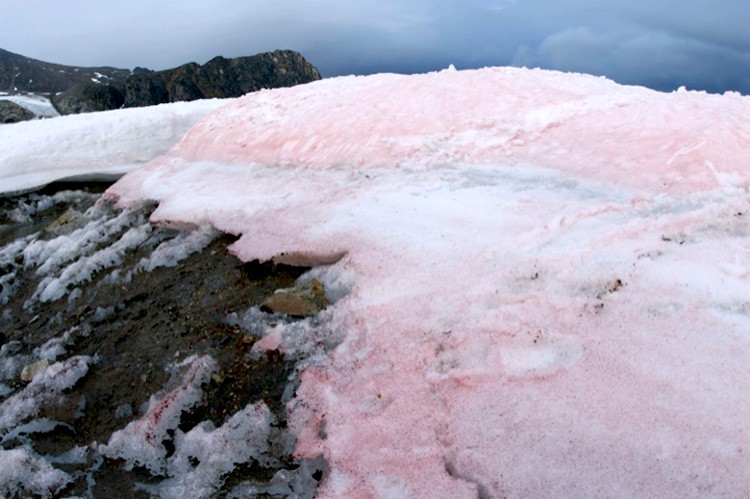 resulting in colored ice on alpine glaciers, which can rely on more substantial dust deposition from closeby regions).

If you have some rocks exposed to air and light you can at least support lichens or moss, like here: 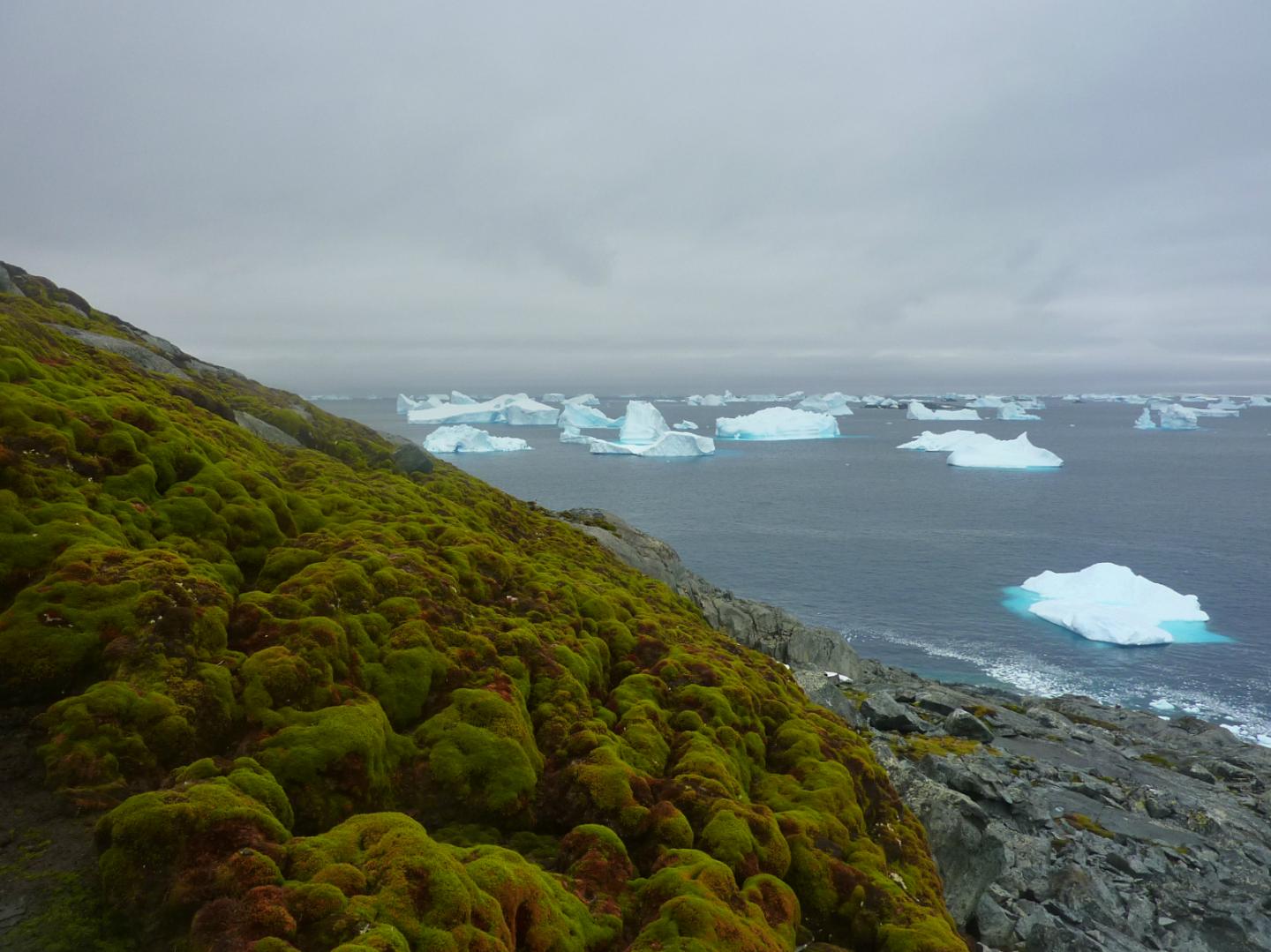 The biggest problem to overcome would be water, ironically. Arctic and Antarctic plants do exist, but they have deep root systems that burrow down below the permafrost to where they can get liquid water. One way would be roots that were dark, even black to absorb enough heat to melt the ice just enough to extract water.

Failing that, your plants would need to have some system where they could grab moisture from the air through the sublimation of the ice as opposed to the usual transpiration that an arctic plant would use. Your plants would also likely need to be carnivorous, as nutrients would be hard to come by on the ice, even if a root system could extract anything. I would imagine they'd need a good way to go dormant as well to allow for periods between feeding and/or periods without sunlight.

While I don't believe there would be any way that a plant could grow from ice, there may be some possibility for some sort of small harvester insect to live that shapes the ice around it in such a way that it is exposed to the sun (and algae can live on top), and the insect simply survives off the algae. We could elaborate further and say the ice is shaped into dome-like forms to intensify the sun's rays heating further the water. You can then imagine thousands of green ice balls scattered across the landscape. It would not have a natural predator, so assuming it could survive in the harsh environment, it would thrive as well.

Edited: The algae would require minerals of course, but these are common in glaciers scraped off from rocks.

I'm going to preface this by saying that I am by no means a botanist, however, you said invent, not "would a plant naturally develop." Humans are very adaptable. If we were told there were the world's largest deposits of platinum, gold, oil, etc in the antarctic, and all that was needed was to grow plants there, the antarctic would look like a rain forest in a heartbeat. If all that's needed is nutrients, then couldn't the inventor also invent the nutrients or a method to get them to the plants? The ocean is full of nutrients, so maybe these plants live on the coastline. According to a quick wikipedia search there are many mosses and lichens. Could those be used? If you are writing a fiction story, I don't think it's too far out there, if you can also solve the nutrient issues stated above, but I think you would also need sufficient motivation.

Trees that remain green in temperate zones that freeze in winter, can do so because they have roots deep enough to reach unfrozen water, and they also have anti-freeze in their sap. Pine and cedar trees get their distinct smell from the turpentine that keeps their sap from freezing.

Without that anti-freeze, the sap would freeze, expand, and crack the trunk and limbs of the tree apart.

Not the answer you're looking for? Browse other questions tagged biology flora or ask your own question.

56
Is a man-eating plant realistic?
15
Does an earth-like planet have to have Ice Ages?
68
Are flying plants possible?
30
Sealing a wound: ice or fire?
4
Could plants absorb ice dust from the soil?
8
What do mushroom-corals use to build their skeletons?
9
How would a plant adapted to living at -23 degrees Celsius keep ice from clogging its stomata?
18
Are plastic plants plausible?
8
How much energy do plants produce?
3
How to stop genetically modified bacteria from creating a catastrophic greenhouse effect?