So I have various factions with submarines and surface ships battling it out for control over various underwater resources.

One of the rarer and more lethal weapons is a "stealth torpedo". It presents a serious threat when employed because as its name implies, it is very difficult to detect and, by the time it is, it is often too late for evasive maneuvers. Would It be possible to somehow muffle the sound of the engine for defeating passive sonar as well as bend sound waves around the torpedo hull like a stealth fighter to beat active sonar?

Currently, I have a system similar to the Caterpillar Drive from Red October driving the torpedo. However, as far as I can tell from the research I have done, the few prototypes in existence are too slow, impractical, and not to mention too big to fit in a torpedo.

The state of the art for subs is stealth. You can't hit what you can't see. When sneaking around everyone uses passive sonar since active sonar lights everyone up equally. The idea is that you need to minimize cavitation, that's what happens when the spinning prop blade (which has a shorter radius near the center) creates a density differential in the water and forms a bubble. The resulting bubble collapses making noise. Minimize that and you're good. It works better at slow speed, but you can kind of tune your prop for the speed you want. The process is well known, but solving the problem requires lots of number crunching and some good understanding of fluid flows.

Then one day one of the major powers had this break though in out-of-the-box thinking. Stealth is only part of the battle. When things get heated, everybody lights up active sonar, bathes the battlefield in light so to speak. At this point you want to fire the fastest weapons you can. So instead of making a slow quiet torpedo, they made the fastest they could. They put the prop on the front, they maximized cavitation and put a rocket on the back end of it. The little guy swims in a pocket of air and travels like a bat out of hell. Meanwhile the other side worked hard on quiet torpedoes.

In a situation with multiple sources of active sonar and rocket powered torpedoes/torpedo killers, I'm not sure a stealth torpedo is actually going to win any battles.

You want stealth. Then be stealthy. Blend in. The ocean is full of fish. Look like a fish. Move like a fish. Have the sonar profile of... you get it.
The sub cannot destroy every medium sized fish that comes into the vicinity. Have it swim around lazily in a fishlike matter. Then it gets close and BLAM!

The Mossad shark depicted here has a propellor - no, no, no. The slow fishpedo should propel itself by swishing its tail back and forth. The squidpedo would jet along like a squid. The hagfishpedo would do what hagfish do. 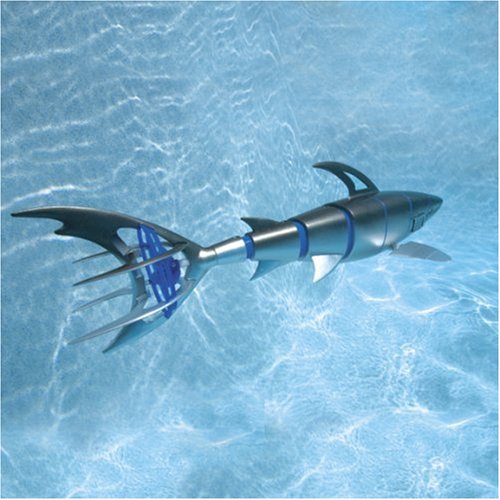 Even if you could eliminate the sound of the engine and keep the torpedo from reflecting sound back to an active sonar system, it wouldn't make the torpedo undetectable. There's a technique known as acoustic daylight imaging that uses changes to the ambient noise of the ocean to produce an image. To such a system, your "stealth torpedo" would present a clear shadow moving against the background.

The problem with a stealth torpedo is that it is moving and displacing the water around it. If it is moving very fast (like a supercavitating torpedo) then the amount of water being displaced will be very large.

We can see some analogues in aircraft, for example sonic booms for supersonic aircraft, but much of the noise an aircraft in flight makes comes from the propulsion system moving masses of air backwards to provide the forward thrust for flight. But that's not all. Even a glider is actually rather noisy when you are inside.

Now water is 800x denser than air, so the amount of movement and displacement is amplified by a huge amount due to the higher fluid density.

This is not to say "stealth" underwater is impossible. A submarine covered in metamaterials optimized to the wavelength of standard or known enemy sonars will evade active detection, and so long as the captain maintains silent running discipline and moves relatively slowly, the submarine itself will be very difficult to detect. But this is actually quite the opposite of a torpedo making an attack run against a ship or submarine.

The best sort of "stealth" torpedo is actually targeted using passive means like hydrophones or MAD, and either air dropped by helicopter or airplane, or launched at the enemy sub by a rocket and drops into the water quite close to the target. There the enemy has very little time to react to the sudden appearance of an active "fish" making a run, since they did not realize they had been spotted and never "saw" the torpedo coming until it hits the water.

The stealth torpedo exists today. It called a sea mine. They don't make noise. They can selectively attack vessels. And, covered with sound absorbing material, active sonar has a difficult time spotting them.

The design of submarines is to get close enough, without being detected, to fire a weapon. Once the weapon is fired, everyone knows where you are. The design of torpedos is to have such a great range and velocity that the target has to focus on evading the torpedo giving the submarine, or subma to aficionados, slink away and hides again.

Ship killers fired by submarines sound like locomotives bearing down on you -- at least that is what the sonarman told me. The only way to make them quiet is for them to move very slowly. But, the torpedo ejection mechanism is very loud, so a slow-moving torpedo after a big loud sound of the launch is what subma's call very very bad.

In many ways, submarines are like artillery. You shoot, then you scoot, if you want to stay alive to shoot again.

The japanese used oxygen propelled torpedoes, which were hard to detect from the air, since the oxygen bubbles were absorbed by the water, in contrast to other gasses. You could maybe try to extend this system and use it to reduce the moving parts and use a jet system as propulsion.

What you also have to consider is the following. A traditional torpedo works via a displaced water and shockwave, not via the impact. That is why they are actually quite big.

So your goal should be to reduce their frontal profile as well, to reduce the water displacement and the possibility of active sonar detection.

If your target is something like a carrier or a strategic sub, you could make the torpedo "smart" replace the payload with something like a long shapedcharge, that attaches to the hull, and rips it open, via lance explosion (think of ebene emael and the nazis), or the cut (cooper plate method used in demoltion), or a real small nuclear device, (if you are in the near future)

There are two paths you can take to bruteforce your way around detection.

There are some torpedoes that through sheer thrust cause the water around them to vaporize. They literally fly inside a bubble and reach speeds which regular torpedoes cannot match.

Another russian invention, the Poseidon is a torpedo with a payload of four Tsar Bomba's. If you haven't heard of the Tsar Bomba, you haven't browsed this site enough.

The idea of the Poseidon is not to be fired during a battle, but to be activated up to a a couple decades prior to the battle. It makes its way toward coastal cities slower than a sleeper shark, which makes ot very stealthy. Once an enemy power threatens you, you just send the signal, and then your enemy is a few cities shorter than it was a few minutes before. There is no better deterrent to aggression.

Some conspiracionists say that there are already many Poseidons stationed worldwide after its unveiling last year by Putin. Of course no one can either confirm or deny that right now.

Not the answer you're looking for? Browse other questions tagged reality-check warfare underwater audio or ask your own question.