So, as a project for an idea, I'm trying to blend sci-fi elements with a Tolkien-ish world to try something new. One of the key features of this world is a type of universal energy which has the following qualities:

...This is starting to sound like Mana. All I want to know is if there is ANY way that this isn't deniable, and if it could potentially exist. I would like serious answers. But any helpful response is appreciated.

It's possible, though improbable. Let's go through the list, shall we?

So, with all of this, what you are trying to create is really garden variety "energy," except for one detail: the ability for a neuron to manipulate it. That's really the only unique trait you have to worry about explaining. And maybe we can do something about it.

When building systems like this, one of my favorite tools to use is called metastability. I love using it not only because it has the prefix "meta-" in it, but because it's something that happens in real life and has all sorts of odd properties which border on magic.

The idea of metastability is this. Consider a cannon ball placed on a hill.

The cannon balls in positions 1 and 2 are stable. You can leave them there for as long as you like, and they wont move. If you perturb them a bit, pushing them a little one way or the other, they settle back down into their stable position. At all other positions on this hill, the ball will roll down into position 1 or position 2. Which way it goes depends on where on the hill the ball gets placed.

At the top is the curious point. This is the metastable point. If you do the physics, you find that a ball placed perfectly at the top of this hill will not fall to position 1 or 2. It will instead just remain at the top of the hill, forever. However, if the ball or hill is imperfect, or if you give the ball the tiniest of taps, it will move into position 1 or 2. This is metastability. It's not stable, but it also wont move if it's perfectly placed.

This creates all sorts of odd things. For example, you've been told that absolute 0 is the lowest temperature something can attain. Well, that's only part of the story. It's the lowest temperature a stable thing can attain. Metastable things can achieve negative temperatures. We've indeed created bundles of atoms hovering at one of these metastable points which, by the mathematics that defines temperature, are actually at a negative temperature. Temperatures below absolute zero are strange. Usually heat flows from the hotter object to the colder object. However, if one object has a negative temperature, heat flows from the colder object to the hotter object! Why? It's the mathematics we use to define temperature, and its just one example of many where metastable objects behave in ways which are "out of this world" for most of us!

If your "meta-energy" was stored up in such a metastable state, it could be converted to any normal energy at any point in time, simply by nudging the energy to move towards a stable form of energy. It could also be harnessed in something like a crystal, because as long as the energy is perfectly metastable, it stays that way. Of course, in practice all known metastable systems fall back down to one of the stable states, but it can take a long time. Hydrogen peroxide, for example, can take 20 days to fall from its metastable state to a ground state (water and oxygen), longer if stored properly. However, if there was something about this energy which was borderline self-aware, it might stabilize itself on this metastable state. It might appear as though this energy is "searching" for something to turn into, and waiting for something worthwhile. (I find anthropomorphizing is effective for trying to convey a magic-like thing which has physical properties). Think of balancing a broomstick on the palm of your hand. Now imagine the broomstick balancing itself in that upright position, and you've got a pretty good metaphor for this "metaenergy."

Human neurons contain a metastable pattern of their own. Its the force behind why they fire. They can go for very long periods in this metastable state before a stimulus nudges them and causes them to fire (really all I'm doing here is taking real physics and applying the term "metastable" to them when describing these states that survive for a long time and then suddenly decay). Well, what if the human neurons adapted to have a pattern which your "meta-energy" resonates with, permitting the human neurons to unleash that energy in a way which might take millions of years to unleash via random particle interactions. It's like your neuron can fire in just the right way to "convince" the self-balancing broomstick that it wants to fall to the left, or to the right.

Suddenly now your "meta-energy" is just garden variety physics-class energy, just a really peculiar variant of it. This is good because it means you're likely not to run into huge trouble with physics -- you're just using physics like normal. However, due to the metastability of this energy, it behaves in ways which most of us wouldn't think about it behaving. Toss in a little evolution of the human neuron, and you've got a complete system. The only thing that's missing is an explanation of why your world has so much energy pent up in this particular form. While our real laws of physics don't prohibit "meta-energy" of this form, they certainly suggest it should be incredibly unlikely. Fill in this detail in your universe if you want, or just have it be an unexplained detail. Have it be a part of your world that infuriates scientists by being incredibly hard to study, thus virtually impossible to explain.

You also might draw from Aristotle's theory of motion. In it, he defined two types of energy. The first is energia, which is pretty close to what most of us think of for physics-classs energy. The second is entelechia, which is energy spent to keep something as itself. One classic example from his works is that a fish expends energy in the form of entelechia to remain a fish. If a fish stops expending this energy, it quickly ceases to be a fish and becomes dead meat. It's not an easy topic to digest, so it may take some time, but it's a powerful theory for building sci-fi worlds. There's a lot of corollaries that can be drawn between his entelechia and such self-stabilizing metastable patterns, so if you ever wanted to drop the high-tech physics speak and go old-school philosophic with your theory, he's a good source to draw from!

Is this an energy field created by all living things? That surrounds us and penetrates us? It binds the galaxy together? Must you feel the Meta-energy around you; here, between you, me, the tree, the rock, everywhere, yes. Even between the land and the ship.

I definitely think it is a workable concept. 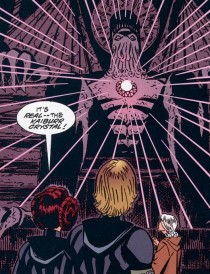 One of the key features of this world is a type of universal energy which has the following qualities:

We've got a form of universal energy already and it works fine. It's called "energy". Everything (photons, neutrons, pizza) is a form of energy - we've got different "wrappers" for energy, but it's all just energy.

What you're essentially proposing is that in your universe is either :

In the case of the second of these (which I prefer), you're basically creating a new quantum field type - some field mediated by a particle type we don't have (or don't know about). It would interact with matter in different ways from the fields we have in our universe.

exists as all states of discovered energy, and a few exotic ones.

That's kinda meaningless. The advantage of the new wrapper type is that it's just energy and we can in principle exchange energy between it and every other type of wrapper.

can be physically harnessed into a type of matter, or more specifically crystal

Energy in one form converted to and from another form. No problem with the new wrapper approach (as long as you don't need the mathematics :-)).

with the simple input of electrical neuron firings in the brain, can be manipulated into a desired force

Well that's tricky unless the neurons in your universe can be made in a way that gives them some way to interact with the new field (the new wrapper).

Now that's not beyond all possibility, as the new wrapper probably will have ways to interact with ordinary wrapper, like matter, but it's non-trivial, from a physics point of view, to imagine any way that just neurons would do this. You'd probably need to contrive some special construct in the brain, e.g. crystals with special properties, that can do this, otherwise everything would be doing it.

Can be exhausted to create any energy form, like heat, electricity, or electromagnetic

Well that's again a bit meaningless in physics, but we can happily (in principle) convert our new wrapper to one of the old ones with some contrived interactions.

This is more making it sound vaguely plausible, than realistic. We're in hand-waving territory and not going to get out that.

Now I did mention the alternative - a type of energy-like something that can be exchanged or mimic ordinary energy. This one has problems, not least of which is that I have no idea to even imagine this in physics terms - practically the entire basis of modern physics is underpinned by the notion that energy comes in different forms but can be converted between them (different wrappers), but not that these things are different.

However it might be possible to imagine (again plausible sounding, but possibly not realistic) some alternative energy field which can co-exist with the "real" energy field and interact with it (it has to interact to be able to do anything to the rest of the universe). It might be able to affect space-time in ways that mimic the behavior of real energy and (hand waving like blazes) somehow still remain apart.

That all sounds messy to me, and compared to the additional field (an additional new wrapper for energy) it's just hard to imagine. @cort-ammon has a good discussion of this, but I can't quite get there myself.

Not the answer you're looking for? Browse other questions tagged magic physics science-fiction .

27
How do I use weird bouncing magic to power my society?
6
Maximum Theoretical Energy Density of Clockwork
10
Effects of Food With LIFE
2
Could this idea for a dark energy prison be plausible?
1
Utility of Class Crystals
15
How do you avoid running out of space due to magically created objects?