How would air pressure gradients be affected by controlled gravity?

My current story is set inside a hollowed out dwarf planet (i.e. Ceres) with an artificial gravity generating "mesh" within the shell. This Gravity Mesh can generate a gravitational field that can be modified, anywhere between 0.01g and 10g in strength.

On Earth, sea level air pressure is 101.33 Kpa, and the Armstrong limit (the pressure at which water boils at human body temperature [37 degrees celsius]) is 6.26 kPa, which usually occurs at around 19,000 meters. The elevation at which humans usually need supplemental oxygen is 4,500 meters, which has an air pressure of 57.73 kPa.

What I would like to know is, how would changing the strength of the gravitational field affect the air pressure.

Assume the atmosphere consists of a standard nitrogen/oxygen mix with Earth-like stats at 1g.

Since we're assuming an Earth-like system (1 atm at sea level with Earth's g), there's a convenient formula we can use for this:

As you can see, pressure is a function of:

The other terms: k is the Boltzmann constant, and m is the mass of the air molecules. This is taken as the mean for gas mixtures. These are fixed parameters.

So now we can plot a few curves and take a look: 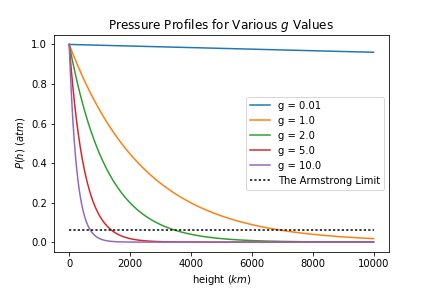 We can can calculate the heights at which the Armstrong Limit occurs for each value of g. They are:

Thanks to SteveES for pointing this out. My original plot had each P(0) occurring at the same value; this is inaccurate for the label I used on the vertical axis, which should have been P(h)/P(0), not just P(h). Here's an updated plot with the true values. I had to cut off the upper part of the curves for higher g. Here is the updated plot: 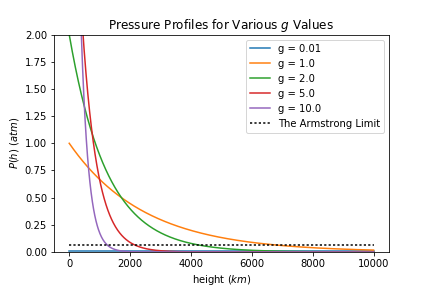 Air pressure (atmospheric pressure) multiplies with gravity, so that is easy. Assuming a thorough mix of gas components in the atmosphere, at 0.5 g the Armstrong limit would be 1/2 as high and at 2g twice as high.

Now that is done, the excellent part of this is that by cyclically adjusting gravity and thereby air pressure, air could be made to flow in and out of any cavities in continuity with the atmosphere. Done correctly, humans and all other animals could breathe automatically and without any effort. It would be a worldwide iron lung. This would be useful for the very sick, the very tired and the very lazy all of whom would thrive in your subterranean paradise.

Not the answer you're looking for? Browse other questions tagged gravity space-colonization atmosphere health or ask your own question.

5
A world with 1/3rd gravity but 1/2 atmospheric pressure. Would it be easier to fly?
7
Effects of increased air pressure on humans
4
Using liquefaction of gases to make an habitable dome
6
Maximizing the vertical range of livable air pressure
10
Pressure suit design that would allow a low pressure-adapted being to survive on Earth?
11
How do I increase air pressure for the planet Mars?
5
Would it be worthwhile to locate capital in high mountains on an exoplanet with higher atmospheric pressure?
1
Calculating average sea-level air pressure
10
How could a breathable ultra-high pressure atmosphere form?