There is an interstellar civilization somewhere between K2 and K3 and they have managed to build a dozen Nicoll-Dyson beams. These are megastructures which collect the entire power of a star, and pump it into a giant laser.

The beams were successfully used to destroy their enemies, and to perform some astonishing astro-engineering, but after some centuries, they got bored of them, and decided to build the astrophysical Tower of Babel. The plan is to focus all the 12 beams into an even more luminous and collimated beam, and aim it on distant galaxies, to send messages boasting with their deeds.

However, no lens or mirror made of matter could withstand the power of these weapons.

Would it be possible to use the gravitation of some massive object to focus the beams into one?

If possible, how compact the object needs to be? Would a normal star be enough, or would they need a black hole or neutron star?

After some more consideration, I'm less confident that the proposal could work. There are two reasons: No guarantee of focusing at any one point, and an inability to control the parameters of the lens.

1. A gravitational lens has no focal point.

The analogy to a traditional lens does eventually break down. One reason is that gravitational lenses do not have focal points! They behave differently than the lenses you might be used to dealing with in optics; instead, gravitational lenses have focus lines. This means that if there is deviation in the positions of your lasers, you are definitely going to have problems.

The big issue is that the effects of lensing are not linear. A light ray twice as far from the lens will not experience twice the lensing. In optics, you do see linear dependence for lensing, which is what allows you to construct lenses with focal points. That's what makes things like glasses, cameras and telescopes possible and effective.

If a laser is offset the wrong distance from the central axis (the large black line in the figure below), its beam will reach the focus line at a different point than that of a laser positioned correctly. This means that your lasers will not, in fact, combine constructively. There's even the possibility for some destructive interference.

2. You need just the right setup for your lens.

I put together a diagram of a typical gravitational lensing scenario, assuming that the lensing object is a point mass: 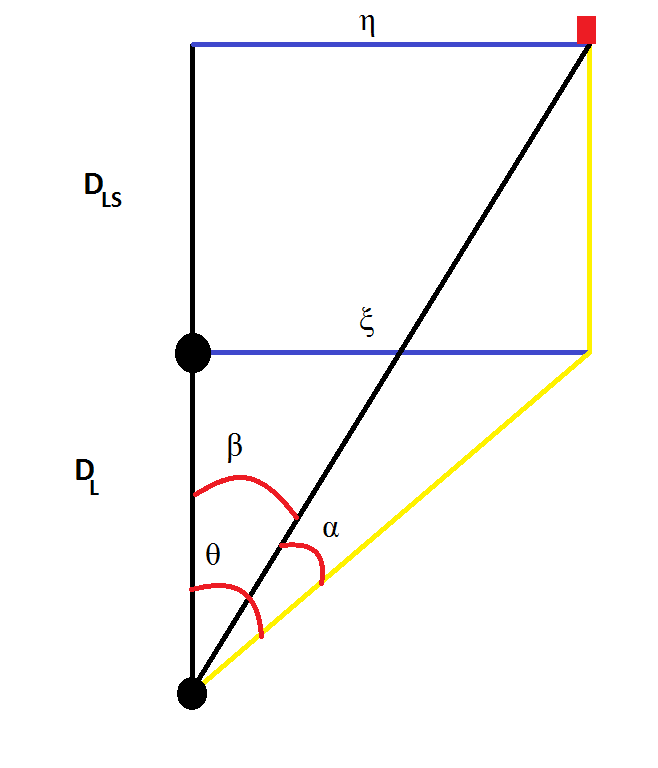 The remaining three angles ($\alpha$, $\beta$, $\theta$) should be apparent. The path of the light is in yellow.

Your question features a ring of lasers spaced at some common distance from the center (I assume) with some radius $a$. I'm also assuming that the line connecting the ring and the target is perpendicular to the plane of the ring, meaning the initial path of the light is parallel to the line. Therefore, we have a special case where $\xi=\eta$.

I'd advise finding something relatively small. Galaxies are not good because we've assumed that all of these lasers point in the same direction (and don't spread out too much - though that's not likely). If a galaxy was the lensing object, you'd need $2a>d$, where $d$ is the diameter of the galaxy, and that's not really feasible in your scenario! If the lasers could be pointed independently, then maybe you'd have something, but it doesn't seem like that's the case - and anyway, if they could, you could then simply point them all at the target without using any lensing at all. However, I believe that's not the case with the sort of beams you're describing.

You're pretty limited by this method because you need three collinear points: The center of your array of lasers, the target, and the lens itself. We all know that Space is Big; more to the point, it's pretty empty when it comes to objects like stars. If you're using gravitational lensing, you really need to pick your targets wisely. $\text{(5)}$ is incredibly important (and, I think, accurate), because it must be satisfied for this to work.

At distances this large, by the way, the $1$ inside the square root is negligible, and, roughly $w(z)\propto z$. Therefore, multiplying $z$ by, say, $42$ should multiply $w(z)$ by $42$. The nearest major galaxy, Andromeda, is about 2.5 million light-years away, on the order of $10$ times the Milky Way's diameter. Therefore, if the beam was sent from the Milky Way to Andromeda, it should have a $w\left(\text{Andromeda}\right)$ of perhaps $30\text{ AU}$. Strange.

It would seem, then, that this sort of beam could not grow very large - at least, not to the size of the galaxy, using these parameters. That's fortunate, because if it grew that large, the intensity would likely be so small that it wouldn't do much good at all!

Basically, only use your Death-Star-green-Gaussian-Nicoll-Dyson-beam-space-lasers on smaller targets - like maybe planets or other stars. Or Alderaan.

They clearly aren't bothered about getting rapid replies. Even a sub-K1 civilisation like us has spotted quite a few places in the sky where a distant galaxy lenses a more distant one. Send light back along that path.

Of course, by the time your signal reaches the lensing galaxy, it will have moved, but this is a vanity project anyway.

Magnetism could be used to focus such a beam, because magnetism has both attractive and repulsive properties depending on polarity. But you already knew that if you're playing with Nicol-Dyson beams.

It's easy to think of gravity as a similar force to magnetism, but it's really not. Using gravity, you can bend things (hence refraction), but you can't really repel things. to focus a beam with gravity would require a 360-degree ring of some sort with repulsive gravity, which as far as modern physics is concerned, isn't a thing.

Fortunately, your ejected stellar material is already heavily polarized by your Nicol-Dyson beam to begin with, so using magnetism to interlace and tighten them into one beam should be possible, especially if your 12 beams are 6 of opposing polarities.

Not the answer you're looking for? Browse other questions tagged science-based gravity space-constructs lasers or ask your own question.

9
Using lasers to stop bullets
2
Gravitational waves as “reaction mass”?
72
How to harness Jupiter's gravitational energy?
3
How to negate gravitational influence of specific objects in space?
4
Gravitational flatness, the topography of Lagrange “points”
2
By what mechanism can lasers destroy an entire planet?
8
How to protect your ship against TW-range lasers?