World Map - How can I tell if the Ecosystems are realistic?

I'm trying to create a world map for my fantasy novel. My problem is that I love designing things, and I'm finding myself bogged down with figuring out how desert A got where it is, and how plain B's temperature is different than plain C, and so on. I've never studied that type of thing in any great detail, so my knowledge of how the different ecosystems form is limited.

This has led me to ask the following question: how can I know if a map is realistic?

For the majority of readers, knowing that plain G would be cool instead of hot, or that a forest would require more rainfall than is mentioned, is not going to be a problem. However, there will invariably be the one person who knows how all those things work, and if the impossibility of the map really gets to him, it could sour his reading experience. That's not something I want.

So how do I know if a world map is realistic, short of knowing how every ecosystem on earth forms? Is there a cheat sheet?

Post-Answer Note: While I've marked the answer by John, it's not the one that helped me. It does answer the question, but what I ended up using was the resource linked by Monica in the comment below. It was detailed but still simple enough to provide exactly what I needed. I was able to create a realistic world in a matter of hours, and have zero doubts about whether or not it is realistic.

First it is always possible to educate yourself, you can find secondhand or old edition textbooks fairly cheap just find a beginners Climatology, landform geology, and Meteorology book. learning the basics in not that hard.Continuing education classes and even Khan academy videos are also options.

Second, here is some bare bones basics just to get you started. I am sure other will have many things to add to the list. I have bolded the important take aways. There are a few basics worth considering, and that make bad maps easy to spot.

Lastly Sometimes less is more, smaller local maps are easier to do than large global ones, by removing many variables like jetstreams and ocean currents you can skip a lot of those problems.

Earth, your cheat sheet is earth. You are not an expert and you don't need to be. Chose an ecosystem for your starting location, then decide where the action goes in relation to that place. Where is the planet getting the most prolonged contact with its star? It will be warmest there. Proximity to an ocean or large body of water makes it more humid but also more temperate:

Large bodies of water such as oceans, seas, and large lakes affect the climate of an area. Water heats and cools more slowly than land. Therefore, in the summer, the coastal regions will stay cooler and in winter warmer.

Altitude also affects your climate. The higher up you go, the lower the temperature:

Deserts form due to many factors but have extreme temperature shifts because sand reflects sunlight but does not store it long, leading to hot days and freezing nights. Between extreme ecosystems, there must be a substantial transitory territory (except in the case of altitude, where the transition is shorter and more vertically inclined.)

Finally, when in doubt, check if analogues to your fiction exists in some way in reality. This isn't "cheating", it's a way to ground your player and helps him suspend his disbelief. 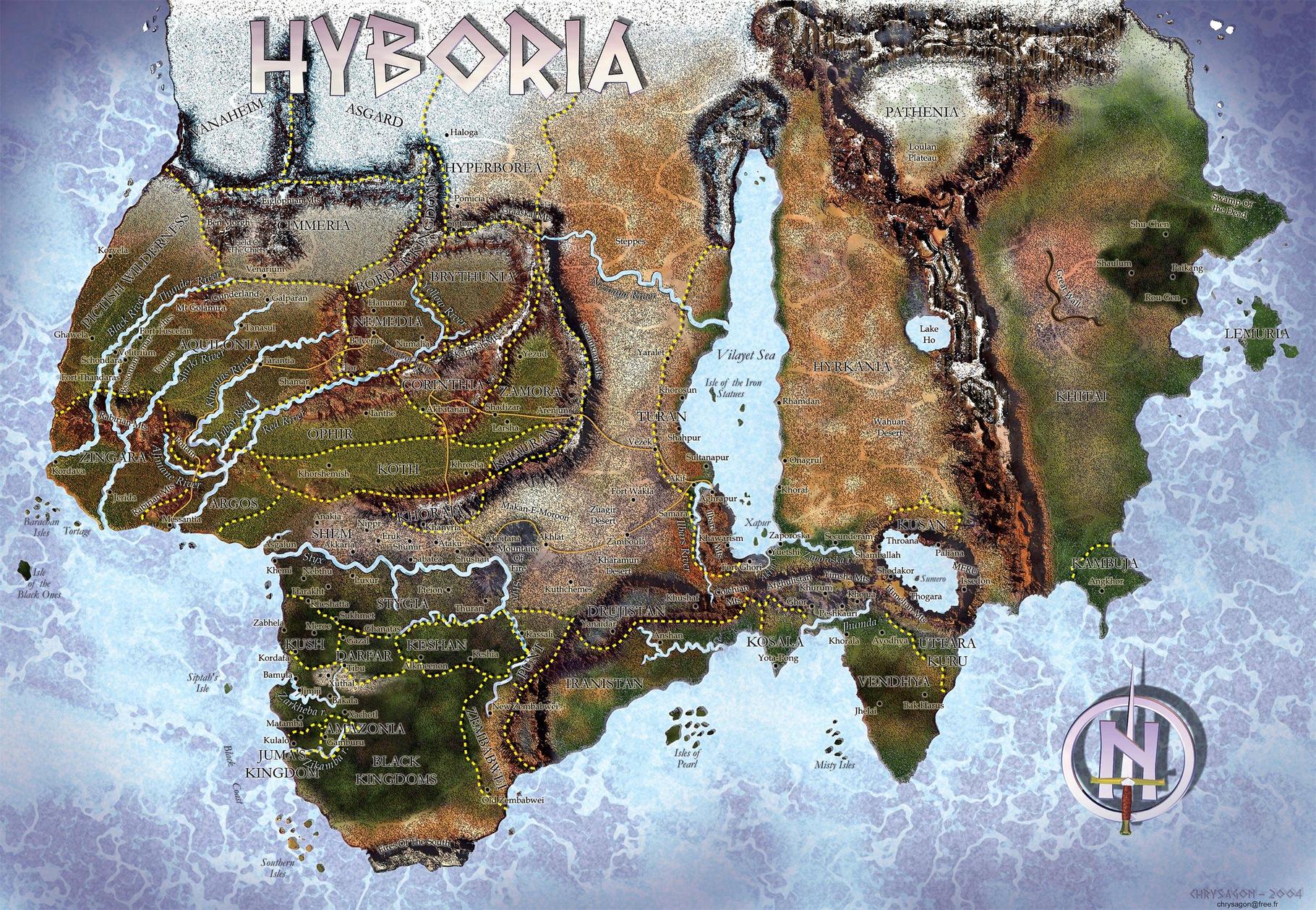 Put your story in a real place on Earth, then change the names. Robert Howard did a great job of this with his Hyborian Age. If you spread out his world and drop the Mediterranean in it is Europe, Africa, the Middle East etc. Of course the premise was that the Hyborian age was actually the remote past of the real world so it should be similar. I have read that Sword of Shannara did something similar: the world is basically North America.

This maneuver makes weather and geography easy, because the author can just pull the details in from the real world. Just look it up.

If you are wondering where to place mountains and valleys, remember that mountains exist for a reason. Most mountains are created when two plates of crust push against each other. So, they tend to be in rows.

Mountains can also be created by volcanic action. They often exist in newer mountain ranges as the cracking of the crust allows magma to find it's way up. However, they can occur other places as well due to a hot spot under the crust. Since the crust moves, there will be a string of this kind of volcano. The Hawaiian Islands are an example of this kind of volcano. You can also get volcanoes where the crust is being pulled apart. Most of that occurs in the oceans but it can happen on land (as is currently happening in Africa). That area will become a new sea but that won't happen for a very long time.

Once you have the shapes of the land and seas from deciding what is moving where, figure out prevailing winds. You can use the Earth for a model of that.

You can also figure out ocean currents. A very simplified version of ocean currents is to draw clockwise circles (counter clockwise in the southern hemisphere) in every big body of water and then draw smaller circles near land masses where there are hallows in the coast. Things are actually more complicated than that but this will rough it out. Where the current travels from the pole toward the equator, it will pull colder water and the air that passes over it will be drier. Where the current rises from the equator to the pole, the water will be warmer and the air passing over it will pick up more moisture from evaporation.

The windward side of mountains will always have more moisture than the leeward side. Swamps happen in flat spots where water drains slowly. This usually happens in slow areas but could happen at elevations that have poor drainage.

This will allow you to rough out your terrain and climate but there can always be local oddities. The Earth has plenty (Grand Canyon, salt flats, Yellowstone geysers, Butte Montana, etc.).

Knowing how every ecosystem on earth forms actually isn't that complicated. You really only need to know two things: how hot or cold it gets in an area, and how much water it gets and when. Places near oceans are usually wetter than places that are inland and/or blocked off by tall mountains; cool wet places will experience snow in the winter, while places that are rainy and warm all year round become rainforests. Depending on the size of the continents in your world they might experience on earth as well.

After that it's just a question of knowing what types of plants and animals are likely to be found in what climate, for which earth can be a pretty good cheat sheet. I've also found Geoff's Climate Cookbook to be a useful resource in this area.

33
How can I create a map of an underground city?
9
How realistic is the geography of my map?
11
Determining climate and biomes in a non-planetary setting
11
What are the potential pitfalls when using metals as a currency?
4
How Can I Draw a Realistic Topographic Map?
3
Where would rivers and lakes make sense on this continent?
3
are my rivers and map little realistic
4
Reasonable placement of tectonic plates
4
Which map-making software is best suited for my interests?