In laying out the groundwork for a series of stories I'd like to write, I'm positing a somewhat modernly-realistic take on the "well-aged human empire in the stars" type of setting the classic authors used to portray so elegantly.

I want to avoid as much suspension of disbelief by way of what advanced technology can actually do. So, I'm mostly not using mysterious MacGuffin technologies for artificial gravity, FTL and the sort.

The main suspensions of disbelief are:

A.) Fusion power has been mastered to its fullest extent, and thus energy isn't an issue for this society. This is actually pretty likely if we as a technological civilization refrain from collapse or doing ourselves in.

B.) Stable wormholes large enough for massive vessels to traverse can be created and maintained indefinitely. This isn't out of the realm of possibility, but is the most optimistic interpretation of wormhole theory of course.

These wormholes are created with no way of knowing where they'll open to on the other end. So, most, if not all, of the colonized systems, they have no way of knowing the relative location of in space. They might be in galaxies we can't even see with telescopes.

My question therefore is, would they be safe from violation of causality if they simply open up to locations too far for light to ever reach from Earth and vice versa? (Or at least with very significant light speed delay?)

Or, would they need to open to other universes altogether, that happen to have the same cosmological constant and other properties as our own universe?

EDIT: It's been brought to my attention that this question, probably due to my own wording, is kind of hard to answer, so I'm appending some clarifications here.

1.) Travel through such a wormhole is essentially instantaneous. Any matter crossing the wormhole's event horizon arrives at the destination instantly. Obviously, something a mile long traveling a mile a minute, would take a minute for its entire length to arrive. If it helps, imagine them as three-dimensional bubbles that behave like the portals in the game "Portal".

2.) My concerns about violating causality are, as a commenter said, the pole and barn paradox. Many physicists believe that anything that could cause such paradoxes simply won't happen because it's an unbreakable rule in this (or indeed any) universe. So it seems to me that wormholes of an instantaneous nature like I'm proposing, would have to lead to destinations far enough away to avoid this violation, and avoid the time travel issue as well.

This question has more or less been answered in a comment, because I asked it without considering something they graciously pointed out about the paradox being an issue even in normal space. If they can repost their comment as an answer, I will accept it and mark this question answered.

Naturally I pick as my first question to ask on here, something so obtuse and abstract nobody wants to touch it ha ha.

The Pole and Barn paradox exists even at sublight speed.

That is not an issue of causality; it is just a disagreement about when things occur. It says that in one point-of-view (an observer in the barn) the pole fits in the barn with both doors closed at the same time; while in the other POV (an observer on the pole) both doors are never closed at the same time. The link I gave shows that is the case even at 0.9c, which is within the laws of physics. This is a paradox even without FTL.

An alternative writing approach: If two observers are NOT traveling toward or away from each other at relativistic speed, then there is no problem.

Make that a feature of your wormhole: It is impossible for it to open on anything but empty space in microgravity conditions. I'm not sure if space itself can be traveling (I don't think so...) but just in case, say the wormhole will not open unless time is passing at the same rate on both ends; it cannot be stable, and you wouldn't want it anyway: Your scientists calculate that an instantaneous change in Lorentz contraction that is greater than half the width of proton will cause atoms to disintegrate in a nuclear reaction; e.g. an explosion.

So you have no problem, neither side is traveling at relativistic speed away from the other. And as you said, no telling where they are, somewhere in the infinite universe; but all relatively at rest with respect to each other.

I know it's an old post, and it's marked as answered. But hey, it came to the top of my feed for some reason.

You can't save causality if you allow wormholes.

If you have a wormhole connecting two events at a space-like separation, then you must make a choice as to the relative time that the join is made. If you can connect two events that are space-like separated (separated by more space than light can travel in the time difference) then there is no reason you can't connect different times at the other end. Anything that did prevent you doing so would violate special relativity.

Example: Suppose you build a wormhole that connects two points 30 light years apart, doing so in a manner that you believe puts them at the same value of time. And your buddy is moving at 0.001 times the speed of light relative to you. And he does the same. Then his wormhole and yours will be different at the ends by about 8 minutes. So you can travel back in time as far as you like by going through one, and back through the other, as many times as you like. 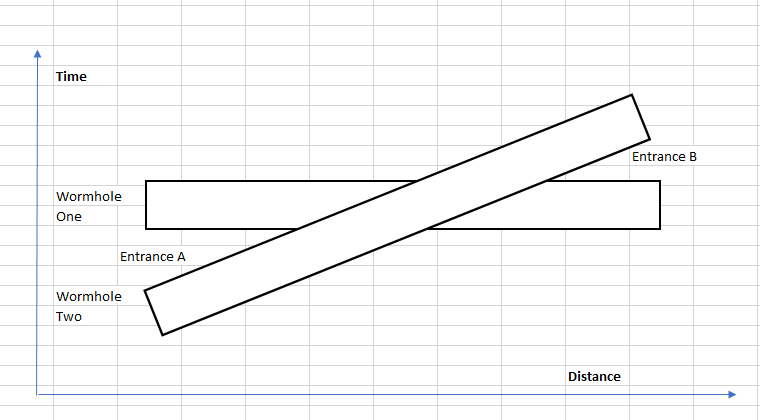 The only limit is, you can only come out as far back as the wormholes both existed.

If you are willing to start with a premise that fusion is developed and wormholes provide galactic or inter-galactic travel; then you are starting from a premise that makes a lot of the quantum mechanical cookbook possible. And that opens the door to a lot of possibilities that only appear to be a causality violation from a newtonian physics worldview. Imagine making switches from quantum spin paired devices. Now enable your communications devices with them. Drag them through the wormhole. You can send pictures instantaneously that the light will take years or hundreds of years to travel back home. Did you just change someones future by sending them a warning of a navigational hazard in space? Perhaps from a narrow worldview. Mathematicians tend to create tools to solve problems long in advance of actually having a real problem to solve. Cauchy bubble descriptions of causality are an example. "If quantum mechanics hasn't profoundly shocked you, you haven't understood it yet." - Niels Bohr

Not the answer you're looking for? Browse other questions tagged science-based space science-fiction wormholes .

2
Creating wormholes that aren't magic
10
Technological applications of light only wormholes
2
How would mankind “tame” wormholes enough to use them for travel?
1
How could a Wormhole be transported?
20
The mass of an economically feasible non-microscopic traversable wormhole
10
Does crossing a wormhole happen instantaneously, or with the course of time?
4
Non-causality-violating FTL travel. / Can omnipotence beat causality?
10
How would you arrange wormholes throughout the galaxy so that they don't violate the Chronology protection conjecture?
2
What would two planets connected by traversable wormholes trade that is worth the travel risks?