What if an Earth-like planet had rings? [closed]

I use "Earth-like" in this instance to describe an alternate world with conditions to lead to the evolution of humans. This planet is not Earth and exists in a different system or galaxy entirely. For the purposes of this experiment, assume all other factors are identical to Earth except that Earth has rings and no moon. What would be the differences between "RingEarth" and "MoonEarth?" I'm mainly asking for the environmental effects, such as tidal forces, magma flow, the atmosphere, and climate differences.

First things first. Rings around a planet are comparatively short-lived. For example, there is speculation that the rings of Saturn may be very young and only have a 100 million or so years left in existence. They will fall into the plant thanks to gravitation interactions between other bodies in the solar system and radiation pressure from the sun. The important takeaway is that rigs from through some other cataclysm after a plant has formed.

So your planet will form much like the earth, accrete mass, clear out its orbit, get hit by another body and form the moon. Hey look the earth has rings! 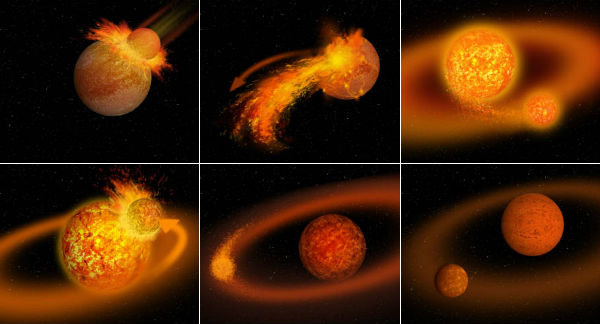 Now here is where the history of this planet diverges from our own. This impact forms two moons. One of which becomes just like our moon, because it's very important. The other does its own thing for a while and is much smaller and identical in composition.

If you want a planet like Earth (oxygen, life, really okay place to live), it needs to have a history similar to the earth. It took the earth ~4.1 billion years before it got to conditions close to today, and ~4.6 billion years to get to humans. Note My source doesn't start the time at the formation, but ~700 million years later. Which means that this planet needs to get to get its rings sometime after 4 billion years has passed because the rings themselves may last only a few hundred million years.

This is where that second moon comes in, say ~4.4-ish billion years after the planet formed. Thanks to gravitational interactions it has finally spiraled in too close to the earth and reaches its Roche Limit and breaks up. For a body like a moon that's a distance of about 10,000 km above the surface of the earth, half as high as GPS satellites.

This is really bad. Shortly after the initial breakup, parts of the moon will rain down on the earth. One mountain sized rock probably wiped out the dinosaurs, there may be thousands of them raining down. In all likely hood, this will sterilize the planet and you will get a world not too different from Venus with rings.

Because that answer is boring, let's examine the case where the Hard Rain is relatively mild and life finds a way to thrive afterward.

This planet will be quite different from the earth. The area under the rings will be an exclusion zone because the material will continue to fall to the earth for millions of years. Expect lots of craters and volcanism due to damage to the tectonic plates. Impact damage may be less severe due to rocks falling in at only orbital speeds ~8 km/s rather than the usual 20-30 km/s.

The shoreline will also be a no-go zone because of tsunamis caused by impacts to the oceans, tides will be unaffected by the rings because they are distributed across the planet.

The sky may be constantly hazy due to a much higher frequency of impacts. Heat from the reentry and dust may contribute to extreme weather by providing extra energy and condensation points for water droplets.The atmosphere may cause cancer, the dust causing Pneumonoultramicroscopicsilicovolcanoconiosis. Overall expect the planet to be cooler due to the dust, the light blocked by the rings will have less of an effect in comparison.

Magma movement will not be affected.

There will also be more UV radiation from the reentries of the rings.

Possibly Less of a night because of light bouncing off the rings and the dust halo around the earth.

And probably a whole lot more which will be added as I think of it.

24
Settings formed by Uncontrolled Terraforming of Venus and Mars via Portals
27
What if an Earth-like planet had no axial tilt? (impact on ecosystem)
15
What evolutionary factors can contribute to large sexual dimorphism in large mammals?
2
Planet with 4 major moons, Habitable?
10
In a species of simultaneous hermaphrodites, would there be any meaningful difference between siblings of the same parents in opposite roles?
14
How large can surface gravity anomalies grow before the planet becomes uninhabitable?
7
How can my fictional race of humans extend the area of their world they can explore?