The island of Rapa Nui (known as Easter Island in English) had an overpopulation problem. They also didn’t have any pigs, so a major source of food was deep sea fishing. So, when they ran out of trees they lost the ability to build fishing boats and lost access to the tuna and dolphin prey. This greatly amplified their resource problem.

Supposing they had gotten a handle on their social problems, controlled the population size and worked together. Alas, this new social order emerged from the crisis, so all the trees were gone before they got their act together. Into this culture was born a genius, capable of design and innovation.

How could they have regained access to seafaring technology? First of all, what alternative construction could be used to build boats? Before the existing boats wore out, they could be used to bootstrap the replacement resource usage. And more generally, what marine-based resources could have been used to supplant their technology and replace the traditional Polynesian methods?

Note that the island is so isolated that any expiditions to even rediscover other lands would require rebuilding the height of their technology first, and decades to acheive.

They must get what they need from the remaining life on the island, the paultry off-shore resources, and the deep sea.

Boats can be constructed using leather or skin stretched over a frame constructed of (drift)wood, bone or other materials (metal, for example). The Aleuts lived in a situation similar to or worse than the one you describe and were successful sea-farers (see Aleutian Kayak).

I think the most likely answer would take the form of the reed boat similar to the ones used in Egypt for a time and by just a new design to make sturdier hulls by changing up weaving process. Of course this could also be done with different types of grass or maybe even crops grown and selected for that purpose.

Boats are either built using wood or metal, at least for their chassis/frame.

If we rule out wood, since the island lacks trees, we are bound to use metal. But smelting and forging metal requires heat, which in turn requires wood or coal.

However, since the buoyancy is given by the volume of displaced water, they could have figured out a way of optimizing the wood usage, like building a frame with wood and use some other material to shape the shell. In this way with the same amount of chopped trees more boats could be built. If this was done before they chopped off the last tree, it could have helped them in better managing the local resources.

Another option could have been importing bamboo like plants, which could have been used to build ships like the Egiptians did (they also had no trees in the desert, but managed to navigate).

An alternate technology path for boat building that comes to my mind is the use of ceramic materials.

Limestone should be readily available on your island either as geological deposits or by directly harvesting coral. Using limestone or other mineral sources it shouldn't be to hard to construct a binder material to make a form of concrete. Limestone does have to be heated to make Portland cement, and lacking trees for fire this might present some difficulty, luckily most islands in the pacific, including Rapa Nui, are volcanic providing a potential supply of heat for baking lime.

Additionally the volcanic island contains very porous pumice deposits. Pumice rocks will in fact float on water possibly leading your innovator genius to develop them for boat building. When used as an aggregate in concrete, pumice makes the finished product much less dense, helpful when constructing a boat.

Since concretes rediscovery and refinement in the 1800s it has actually been used many time as a cheap material to construct barges and ships, specifically during World War 2, when faced with resource restrictions.

The larger concrete boats have been built using steel reinforcing which is not likely to be readily available on your lone island, but the American Society of Civil Engineers hosts a yearly college contest to build concrete canoes with minimal to no steel reinforcing material, proving that it is at least a possible technology path to pursue. 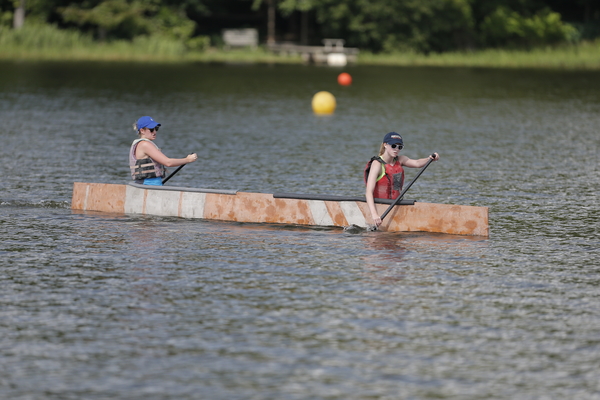 From the Wikipedia section on geology: (emphasis mine)

[A]ll of the great images of Easter Island are carved from the light and porous tuff from Rano Raraku. … The Puna Pau crater contains an extremely porous pumice, from which was carved the Pukao "hats".

Presumably hats were not invented for the statues — people made regular hats for themselves, perhaps as sunshades. They will have noticed that an upside-down hat is like a bowl, our genius realizes the similarity in a concave shape with the dugout canoe.

They would also know, from living there and having lots of rock fragments from the quary industry, that some kinds of rock floats.

So, the stone hat becomes a prototype for a stone boat. The rock is not “closed cell” foam and becomes waterlogged after a while. So they would need to coat the surface or make a skin boat over a stone frame. The latter proves fruitful as they no longer need a solid bowl but meerly a frame.

The return of deep-sea fishing brings the resource of animal skins that they use in more advanced designs. Early fat/mud coatings helped them bootstrap the industry, at least supplimenting the remaining wood boats and taking on seconary roles thus freeing the old boats for deep hunting.

There is no reef system, so not much life in the shallows. They did have some shellfish though.

Why not farm the sedentary shellfish? Modern farmers use dangling lines from a floating platform. If they figured out something like this, they could position them for prime feeding, move them in during bad weather, keep other animqls from preying on them … in fact, attracting other wildlife will become another resource rather than a pest! They are in fact starting an artificial reef! The open fields of shells are bait for the fisherman.

Now this influx of shellfish has a second effect: shells. There’s no limestone or coral on the island, but shells can serve as the basis for making quicklime.

Having this cement will be useful in their technology and industry. But, it’s not waterproof. The Romans made concrete by discovering volcanic minerals including fly-ash. This is a volcanic island… without digging into the actual composition myself, let’s presume they could find something that, ground up and mixed with the shell, produced a somewhat-useful water-resistent cement upon cooking.

The idea of cooking rocks leads to the discovery that their island is a rich source of iron ore.

The problem is, they need energy. Without coal, and without trees to make charcoal, their knowledge will exceed their industry at this point.

The nearby islets covered with birds and lush growth — unlike their ruined land — might lead them to discover guano as a source of nitrogen fertilizer. The idea of farming is already established, so they encourage the plants they want, tending them and getting yields greater than the wild.

By this point, they know they want resources for other technological uses, rather than just direct personal consumption. So they grow crops for feeding animals, for use as fuel and building material, etc.

Well there was one tree left on Easter island.

A single native large tree did survive on Easter island it was however so hard to get to no had succeeded until modern equipment became available. Thor Heyerdahl collected seeds from the last remaining toromiro. A group of islanders could make a great endeavor to reclaims seeds from the one tree left on the island. There is one tree that was left on the island it is on the far side of a volcano on a tall rocky spire, that would have killed most of the people trying to get to it.

from that they would need a very strict form of tree farming and lumber control laws like the Japanese had. Of course they would also need to wipe out the invasive rats on the island, which are what prevented new seedlings in the first place and were a major contributing factor in the deforestation.

Not the answer you're looking for? Browse other questions tagged technology technological-development natural-resources or ask your own question.

54
How do I defend an island nation from attackers with 15th century technology?
19
Could Inuits survive in Antarctica?
114
How long would it take to create a Windows 1.0 capable machine from complete scratch?
6
An interstellar colony is stranded. How long will it take for technology to regress?
4
Could a society attain 1800s technology if limited to using copper and bronze?
7
How to keep an Island civilization secret from the rest of the world? (Modern Age)
5
What technology would be most useful/viable for preservation in the event of an apocalypse?
5
How would a Mesolithic community go about building a permanent settlement?
37
What should a god put on an island, so that its human settlers will more quickly achieve an industrialised society?
6
What resources would underground creatures look for in the surface?