What temperatures could I expect to find on a world with a 9 year day?

I am working on a world where, instead of 24 hours, a day lasts 9 years. On this world the land far exceeds the oceans, to the point where the bodies of water are simply massive lakes (a la the Caspian Sea). The inhabitants of the world are forced to endlessly migrate across the world as a result of this.

Other interesting features of this world are it's two small moons and its large ring going around the equator. Assume that all else in this world is Earth-like, such as it's AU, size and gravity.

On a world with a 9 year day, what temperatures could I expect to find at various longitudes and latitudes, regardless of environmental pressures?

science-based day-night temperature
Share
Improve this question
asked May 30, 2017 at 14:43

With an Earth-like atmosphere and distance from the sun, the planet would most likely have an "average" surface temperature similar to Earth's, but with worse extremes.

Getting closer to the poles

The temperatures would be more moderate -- any range is possible, based on distance from the equator. Temperature would be pretty constant because of the lack of daytime/nighttime.

Fortunately for us, Earth's poles already almost have this condition north of the Arctic Circle. The sun never goes completely down for several months of the summer, and never comes down for several months of the winter. For comparison of a habitable area near the poles, we can look to the city of Barrow, Alaska, where temperatures range from 26 C in the summer to -50 C in the winter.

What does this mean for inhabitants?

Similar to the suggestion from this answer, someplace near the poles would likely be the most habitable place to live for human-like beings. Being near the poles would also make the distance you need to migrate each year much shorter. Staying on the daytime side near the latitude of Barrow, Alaska (about 70 degrees) would yield very pleasant temperatures (Barrow's summer temperatures are around 25 C) and would mean you'd only have to travel around 1000 miles per year to keep up with the sun.

As Enigma Maitreya mentioned in the comments, this condition would be somewhat similar to the orbit of Mercury and Venus. However, Mercury and Venus are both much closer to the Sun, and Mercury has no atmosphere, while Venus has an atmosphere 100x more dense than Earth's.

Mercury's temperature gets as hot as 425 C in the daytime & summer, and as cold as -175 C in the nighttime & winter. By comparison, Venus is 2x further away from the sun, and therefore receives only 25% of the solar irradiance of Mercury, yet its heavy atmosphere makes it have an average surface temperature of around 435 C. (I'm taking all this information from Wikipedia.)

It's difficult to translate this exactly to an Earth-like planet that has years-long days, but it could be done if you are sufficiently math-inclined. You'd need to look up formulas for the magnitude of the greenhouse effect and for the temperature caused by solar irradiance and apply those to the differences between Earth and the comparison planets to obtain a reasonable guess.

How hot/cold would it get?

The extremes in seasonal temperatures on our planet are caused by relatively minor differences in solar exposure times between summer and winter. With exposures as long as 9 years, expect much greater extremes: both an uninhabitably cold night side and an uninhabitably hot day side.

Mercury serves as a good baseline because it is tidally locked but has no atmosphere. You should then adjust your numbers upward to account for the warming of an atmospheric greenhouse effect. Mercury has a surface temperature of 700 K (800 °F/427 °C) on the sunny side and 100 K (-280 °F/-127 °C) on the dark side.

Your absence of oceans will exaggerate the temperature difference between day and night that might otherwise be mildly offset by transferring heat through ocean currents (thermohaline circulation). Furthermore, larger land masses allow a planet's surface to get hotter more quickly, and increase thermal reflection, which is why the northern hemisphere of earth (which has more land masses) is hotter on average during its summer than the southern hemisphere is during its.

Fewer liquid oceans will probably correlate to lower atmospheric humidity in general, suggesting a diminished greenhouse effect such that the cold side will be exceptionally cold (colder than the coldest surface temperatures on Earth). For reference, the coldest temperature recorded on Earth was −94.7 °C (−138.5 °F).

You can safely assume there'll be an absence of liquid water on the surface of both the day and night side, but with the potential for liquid water around the twilight areas.

How would the temperature and rotation affect the climate?

A recent blog post on the Universe Factory guesses that a tidally locked planet would transfer heat from the day side to the night side via planet-wide hurricanes.

I don't entirely agree with that assessment; the center of the baked, low-pressure, zero humidity desert on the daytime side could become a meteorological "dead zone" with little wind and no capacity to support condensation or precipitation. Further, a tidally locked planet does not rotate and thus could not produce the Coriolis effect, so the Earthly process of cyclogenesis would not occur.

However, the twilight areas of the planet would see an exchange of hot and cold air from the day/night sides through the process of convection, and from the interactions of cold high-pressure systems with the warm low-pressure areas. 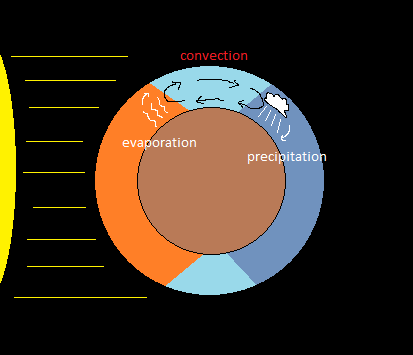 Cyclones would form along the twilight areas and generally migrate toward the poles, although the lack of oceans on your planet could slow their advance; terrain features like mountains could also stop or divert the advancing winds. 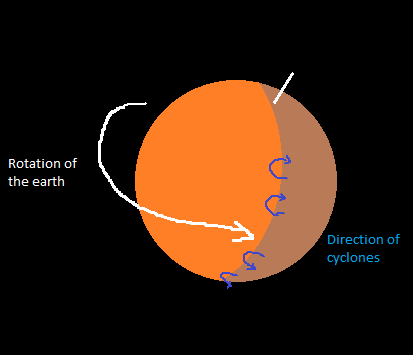 Assuming no significant terrestrial features prevent them from doing so, the two major streams of air to the poles coming from opposite sides of the hemisphere could combine to influence the convection at the poles to generate monstrous hurricanes there.

More salient details about the weather patterns will depend on your geology and terrain.

Not the answer you're looking for? Browse other questions tagged science-based day-night temperature .

8
What would weather look like on a world with a 9-year day?

67
How would people living in eternal day learn that stars exist?
9
A world with only sunlight and a world with no sunlight (Fantasy)
42
How do you tell time on a world with 9-year days?
6
How do you achieve the agricultural revolution without agriculture?
9
Would a species that migrates across the globe discover its roundness sooner?
27
On a world where everyone is nomadic, how does civilization start?
19
I want ten Earth-years long day on my planet. Can I have it?
5
What forms of life would be best adapted to living on a world with nine year long days?
3
Climate on a slow spinning planet