The Science behind X-COM: Plasma Rifles

Plasma weapons are a common trope in sci-fi, but they all suffer the major problem of "cool but inefficient", the plasma dissipates too quickly to be used as an effective weapon.

Based on this answer, I devised a concept of plasma containment, but I'm not sure if it's effective enough 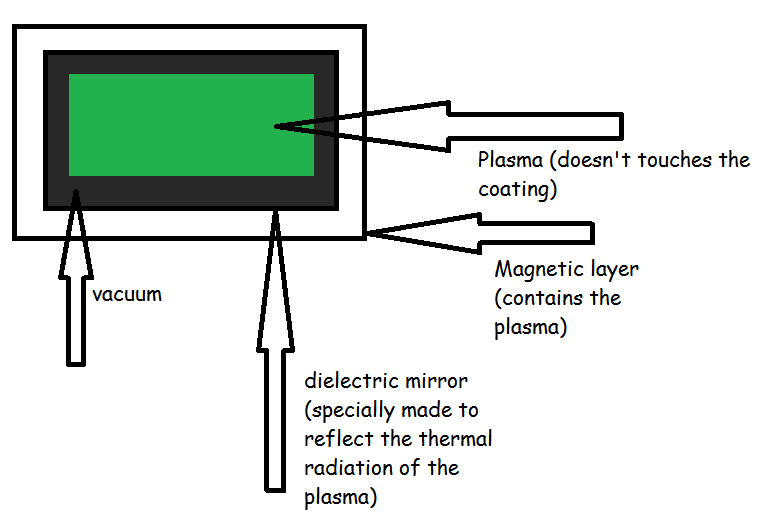 The concept is that the hydrogen plasma is coated with a:

Would this containment be able to keep the plasma alive for long enough to be effective? (600m range, projectile speed is 2 km/s, projectile volume is a 2,5 cm diameter sphere, density and temperature is an exact match to a stronger (computer controlled) plasma cutter's exhaust)

The main flaw I can see in your containment system is that you're saying the plasma "doesn't touch the coating" and yet also accelerating it to $2$kms$^{-1}$ by the time it leaves the barrel of your gun. I can't imagine any magnetic confinement capable of holding something in place which is being accelerated with such force.

The plasma will hit the back of the container before it can leave the barrel.

Assuming we can accelerate them both at exactly the same rate within the barrel you'll still come up against the problem of any resistance slowing the bullet resulting in the plasma moving towards the front end of the container.

As long as your bullet survives it's journey it will hit with a ridiculous amount of kinetic energy and I don't predict your target will be feeling too well after this.

A bullet with plasma inside is not possible.

Today, the most developed project about keeping plasma in limited space is ITER. This is a really big construction. As far as I know, it's very difficult to keep plasma in some seconds: you need strong magnetic fields which generated by current of kiloampers which requied very thick superconductors.

So in the real world it's impossible to generate such strong magnetic field in bullet size.

Think of plasma as extremely hot (thousands and millions degrees) gaze. You can't cover the plasma by any hull in small size - it would be melted.

As described above you can't hold armed ammoes for hours (in you weapon or extra clip) -> you need to create plasma just before shot. It's hard to imagine how (and from where) you could receive energy to heat up somewhat to plasma in fraction of a second. But this is a point of explanation (or just handwaving) you could do.

To create plasma you have to spend some energy. If we fall back to common weapons (firearms are some kind of explosion) then we could say the energy of shot is held in powder and this is a chemically stored energy. For nuclear bomb, nuclear energy stored in uranium. I would say in all most cases energy stored in matter by some means. So if we had created way to store energy in piece of matter and then release it in form of plasma then we could put it in a bullet and then shot. But you could want to release this energy close to the target and therefore you shooting not by plasma balls, you create them at a target instead.

Let's look at Iowa ammo H.C. Mk 13. Initial speed is 820 m/s which more or less comparable. Weight of explosion is only 8% of full weight of shell and 92% is metal hull. It's because of extremal overload while shell escapes the gun. Note that I use data for explosive shell which doesn't require to penetrate anything before boom.

Also in your picture there are no any magnets, cooling system and/or Dewar vessel. It'll also require additional space and weight so for plasma itself there are almost nothing space.

And yeah - just 0.1 gramm of magnets with speed 2 km/s are already deadly weapon even without plasma