How many giants are needed to pull this sleigh?

In my world, there is a race of giants, with an average height of 5 meters. Let's assume that every part of their body is proportional to that of a "normal" human being.

I want these giants to pull a sleigh, and on this sleigh to place a block of iron with the following dimensions: 5 meters (width), 7,5 meters (length) and 10 meters (high). The sleigh would have a design similar to those used by ancient egyptians to move the building blocks of the pyramids. The giants would be placed in front of the sleigh in a fashion similar to that of the cinematic great entrance of Cleopatra in Rome in the "Cleopatra" movie of 1963 (see link). They should be moving the sleigh around on a grassy, earthy, flat terrain.

First, a few quick facts and assumptions (yes, I'll try to differentiate between the two as best I can):

Mass of Sled: The sled needs to essentially support the weight of a small building. Non-negligible but difficult to calculate without some serious engineering. (Can't just "scale up" a utility trailer, as the sled needs to support its own weight that increases non-linearly with the mass of the load.)

For now, I'm going to take an educated guess at about 1/3 the load, based on, well, utility trailers, if you must know. Thus I'll call it 1,050 t to give us an even 4,000 t for total mass (basically GWVR/GVM for those familiar with towing). (Assumption)

Giant's Mass: Quasi-realistic giants (as opposed to just big-ish humans) are always problematic due to the cube-square law, which basically means as giants get bigger, their volume (and hence mass) increases with the cube of height, but the surface area and only increases with the square of height (or width, doesn't matter).

It's a fascinating topic you can read about, but the gist is, your five-meter giants are going to need some magic, I'm afraid. When "juiced up" to proportionate strength, assuming you are OSHA compliant ('cause I mean, who isn't, right?), a human should push no more than 225 N. My average human is 90 kg ≈ approx 90ℓ and stands 180 cm tall. Since the giant's whole weight is involved, we need to do some more math. The cube-square law gives us:

Dividing 1,929 ÷ 90 = 21.4 gives us an upper bound on how much more force a giant could exert in a horizontal push than a human. I say "upper bound" because the legs are significantly involved, and the strength of those would not scale as much as the mass. The giants had to be hand-waved anyway, so you can tune this "scaling" to suit your story the best.

Final answer? Each giant can exert a force of 225 N × 21.4 = 4,815 N. Oh, and this is another big assumption, not due to the math so much as the fact that five meter giants wouldn't be able to stand up without some magic, as above.

Height of force: I'm going to spare you the vector sums and assume the "push" (pull) force from the giants is exactly horizontal. In reality, the angle of force will differ depending on the giant and how far they are from the sled, but not by a whole lot.

Type of sled: I'll do a diagram, but my sled will be rolled on logs, due to grassland not being suitable for the sand-wetting technique proposed c.2014.

Friction (Rolling Resistance): This cracking read (PDF) puts mountain bike tyres on level grass at a rolling resistance of 0.005 to 0.010. Rough-but-elastic logs on rough terrain will be worse, but I'll be very generous and go with the low end of the scale at 0.005.

Logs: Are going to have to be tough, and an average diameter of 50 cm will do for discussion's sake. Thus we have ten logs if the load is oriented as described in the question. 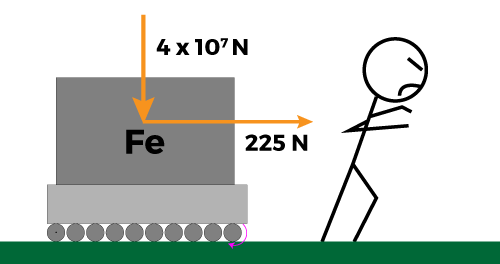 Friction due to the coefficient of rolling resistance is given as:

The second term is the normal force, or weight of the rig on each wheel in this case, but it's the same on all ten wheels anyway. Thus ignoring heat losses in the ropes and elsewhere, all giants combined need to pull with a force of two hundred thousand Newtons to get the cart to start moving.

Yep, bring a towel. Despite the fact that you gave us quite a well-defined question, I still had to make a lot of assumptions. I think my math holds up, but if anyone has any suggestions to make it a bit more elegant, accurate without blowing the answer length right out of the water, (or outright correct any mistakes I might have made—it's late, I'm tired, and I do so love to wake up to "wrong by order-of-magnitude"-type comments :-), please let me know.

23
How big a black hole is needed for this story?
8
How much does Santa's sleigh weigh?
5
Can a city in a flood plain be maintained for centuries if it is built on stone blocks?
2
What geological/geographical features are needed to support a Greco-Roman 'City of Fountains'
9
Are there physical laws making this kind of revival impossible?
9
How many dead bodies are required to stain a river red?
49
How many Santas are required?
12
How many people would you need to pull a whale over cobblestone streets?
2
How do giants play ping pong?