Would an avian-style jetpack be advantageous?

In this world, jetpacks among the "pack" part, also have wings, where the thrusters are suited, so you don't have to buy fireproof pants.

These wings are retractable when not in use, but aside from that, they aren't moving too much during flight (if they do, that's for direction changing). 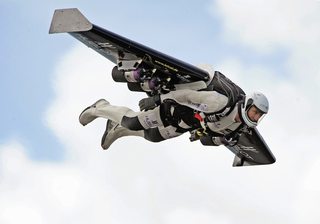 The Jetpack. Wingspan is 2,8 m

Yes, they would be very advantageous for flight.

I presuppose that you allow not a 1:1 slavish rebuild of an avian wing, but a foldable wing with complicated (but now robust enough) inner workings changing the structure of the wing and overtaking the parts of flaps and slats.

Such wings can indeed perform maneuvers which are hard or even impossible for fixed wings. For example, if you land with a fixed wing you need to reduce speed, but you also still need lift, so with a fixed wing you need to increase the angle of attack if you do not want to fall out of the sky. A flexible wing in contrast can bend itself to slow you down quickly and give you the ability to a graceful pinpoint landing (Ever see a big bird landing?).

It also enables you to optimize drag conditions for different flight routines. And last but not least it allows enormous maneuverability by folding wings partly in flight.

All those conditions comes with a price: The mechanical complexity is enormous, so the wing must be really a very fine piece of work. But if it really works, it would rock.

Incidentally, human birdwings are a reality, though the design is rather limited when compared to a bird's abilities to fold them, twist, turn, and dive.

Assuming the wearer has full control over the skeletal structure of each wing independently, the wing is significantly more manoeuvrable. It would allow the wearer to push and pull air in most any direction, similar to how flippers and webbed hands give humans added mobility in water.

However you'll need to consider the control systems, it's probably not trivial to give the user full control over each wing independently, although the basics for powered flight shouldn't be too difficult. In the video linked above, there is a separate blog post about the power mechanism he used.

If you're interested to go more deeply, there is a good structural analysis of bird wing design here, and feather arrangement.

The tradeoff will be directional velocity. Jetpacks have the clear advantage there. As far as I understand, winged creatures cannot exceed terminal velocity in a dive.

3
Evolving an intelligent avian race with a human-like appearance
6
How can I make a jetpack with supercooling?
5
Are black eyes advantageous?
4
Can you actually swing, shoot, throw while suspended in the air with a jetpack?
8
Is my idea of Wyverns realistic?
5
Winged jetpack vs palm repulsors, which has more mobility in air?