How could cowboys and settlers in the 1880s slay a dragon?

So here's some rules: No magic, this is set in the real world, but there's a giant flying animal that breathes fire. Its body radiates a large amount of heat (like being in a steam room if you're next to it), and its scales are metallic. It's about 100 feet in length, and eats about 20 cattle every month.

Its blood is highly heat-resistant when it reacts to open air. It can fly about as fast as a commercial airliner, but it rarely moves from its home (deep in a mountain, let's say the Rockies) unless you really provoke it.

Its scales are tough and nearly impervious to small arms, but they can be knocked off and its hide is very soft. It's a reptile, so it needs heat to stay active. And finally, its fire breath relies on a chemical that it spits like a snake.

So it's the time of Westward Expansion in the 1880s, and a bunch of cowboys and settlers have accidentally discovered the dragon (worst case scenario: They've angered it). How do they kill it with what they had at the time?

I submit that the cowboys could adapt the method of the Practical Princess: dummy dress full of gunpowder. Or dummy cow. In the 1880s they had dynamite handy too which would probably take less space than a keg of black powder. 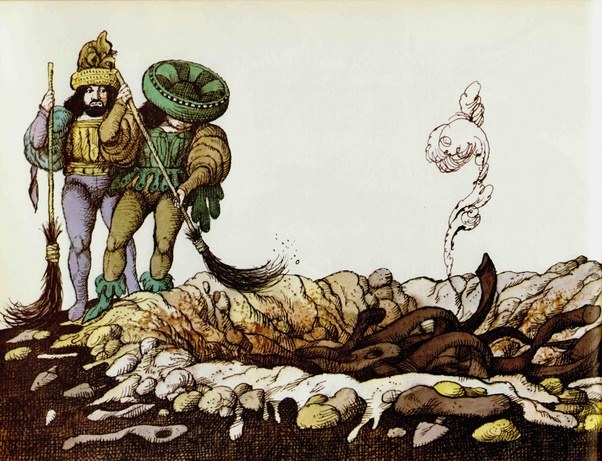 Illustrations were posted on https://bookillustrations.quora.com/Friso-Henstras-Illustrations-for-The-Practical-Princess I am sad the type came thru so small but I am philosophically opposed to cropping these images.

The beast probably swoops down, clutches a cow and rises back in the air to feed somewhere quiet. The hunting range of the dragon is likely to be largish.

You could set up a network of spotters charged with locating the dragon and predicting where it will feed.

The whole area should be freed from large cattle except a few bait ones, grazing in range of a camouflaged observer tasked with igniting a fuse. Then, those cows are equipped with a dynamite vest.

Otherwise, same setup, but with camouflaged Gatling guns or cannons.

There are some substances that might react at above 80 degrees Celsius and be used to permanently equip cattle with exploding vests, but I'm not sure how they'd behave over a long period. Dynamite itself would "sweat" and become unstable.

If the dragon's sight is not too good (a winged predator's probably is very good), fake cows could be disseminated in the countryside and used to bait traps, which would be safer and much less expensive that manning the whole hunting territory with camouflaged Gatling wagons or dynamite-laden cattle. The dragon is likely to need a sizable runway to achieve liftoff, so disrupting the attack run and making it crash in the ground could be enough to immobilize it for long enough to bring guns to the place. Having a wooden cow shoot harpoons or giant bear-traps could do the trick.

There is another alternative which might hurt people's sensibilities.

Assuming the body temperature of the beast is that much higher, it could also be possible to implant cows with a device that I read was used by some Arctic tribes to kill large predators (wolves and bears). A thin, flexible, sharpened sliver of bone (but for us, pointy spring steel with razor borders will do) is compressed inside a ball small enough that it will be likely swallowed whole, made of something that will melt at the target's body temperature but is hard enough at ambient temperature. The original device, called tukmikigiak or possibly mikigiak 1, used lard (ambient temperature being below freezing); we could perhaps use some tar concoction. Once the dragon has swallowed one (or more) devices, the steel blade will uncoil in its stomach or intestine and kill it.

A more humane way, and simpler at that, would be to use smaller balls filled with poison. Assuming we do have a poison that will kill a dragon.

(1) I was led to believe that this device is Sami in origin, but I've discovered that the word used seems to belong to the Inuttitut people.

Maybe there's another problem that the cowboys and settlers would have to face in this situation: the native people they're displacing.

Poisoning the dragon might not work anymore when the native people figured that having a B-17 Flying Fortress on their side would be an incredible repellent against Andrew Jackson's "fuck the natives" agenda.

They might have caught on to the idea and started farming cheap, accessible meat to feed the thing, and then train it to sic the human settlers themselves and burn their crops.

The natives can then back the beast up with human firepower, and protect it against machine gun traps and sabotage anything else the settlers decide to shove down its throat.

Also, what if the natives made armor out of the scales of dead dragons? If they can make scales out of the dead dragons then the settlers not only have to deal with a huge dragon, but also a bunch of mini-dragons "breathing" arrows, or worse, gunfire.

I'm also wondering, is the meat edible? How large is its population? Would there be more dragons than one?

The only way to deal with this is either a) the dragon cannot be tamed and therefore the natives cannot use the beast to further their agenda or b) use another dragon, or c) shoot its eyes.

Obviously having the eyes be a weak spot can make this strategy pretty weak. The natives likely won't have armor that could protect the dragon from small arms or rifle fire for very long without obstructing its vision.

Dragonscale armor would also be a huge commodity that could be more profitable than raising cattle. If the dragon sheds its skin once in a while, then the settlers (or even better, the natives that gotten displaced by them) could make some extra money off an expanded fur trade business.

So my answer is:

Could a cannon work? Not something that a group of settlers would always have (and not something a reader would expect) but there was always an army outpost nearby.

If not find where it sleeps and stab it through the eyes or collapse the entrance of the dragon's lair to trap it.

Cowboys and settlers could slay a it using the same method that peasants and townfolk have applied throughout actual history — trick it using a decoy animal hide filled with something poisonous.

Doesn't sound plausible? But it's worked several times throughout real-world history, so it's hard to argue with. For example:

The dragon of Brno was defeated by a traveling butcher who filled a sheep-hide with lime. The dragon gulped it down, and the lime boiled inside its belly until it burst. (Although, it must be said, not burst so badly that the townsfolk were prevented from taking and preserving the creature to hang in the town hall, where it still hangs to this day.)

The Wawel dragon, which lived under the hill on which the castle in Krakow is built, was killed in a similar way, although this time with the sheepskin was filled with sulphur and mustard seeds.

In some versions of both of these stories, it's not the caustic agent itself, but that the toxic meal caused a horrible belly-ache, causing the dragon to drink so much river water that it exploded.

And these are just two tales from cities I've happened to visit. I don't know for sure about the Krakow one, but the preserved corpse is right there in Brno, so it must be true, right? 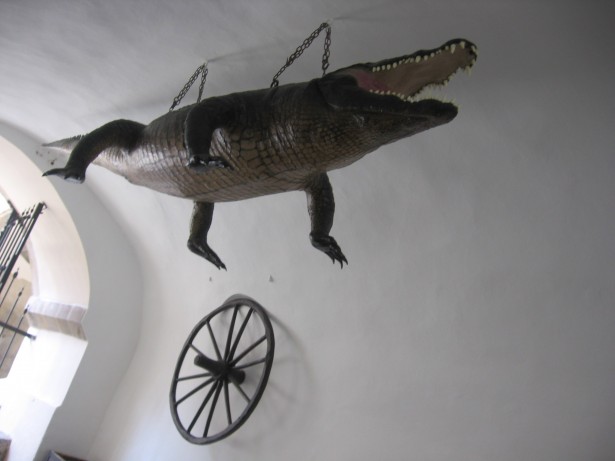 Your dragon seems like it might be a little bigger, and I don't see any evidence that these real-world dragons actually could fly, but I think the same general bait-and-poison approach is likely to work. You might want to try arsenic or something rather than mustard seed, though.

Give its a supply of cows. Cattle Drives were a ready supply of cattle and common in that time frame. Feed it and leave it in peace.

Locate the underground lair entrance, pack with dynamite and seal it inside.

Entice it with a cow covered in poison, dynamite strapped to it with a long fuse and/or nitroglycerin trigger.

If you have to fight get every abled body person a repeating rifle and hope for the best. Increase odds of success by using a Punt Gun or two or three.

Nets or hooks, They don't need to be strong enough to capture just strong enough to change its trajectory in flight. All they need to do is wait for it to dive then snag it and make it hit the ground, its own speed and mass will tear it into chunky salsa.

Dynamite or gunpowder, alternatively they can just dynamite its cave and crush it or explode it. Both were common in the west for mining. If they don't want to get that close they can shell it from a distance for the same effect. Artillery were common enough thanks to the war.

Punt guns Aka "I need to kill an entire flock of ducks with one shot" They were quite common at the time. tear its wings to shreds and let gravity do the rest.

Its hide is very soft.

That's the biggest deal right here. Just take the Hercules vs Hydra approach from the Disney movie. Send someone inside his stomach, killing him from within.

Take something sharp and damage his organs. Inner bleedings will do the rest, even if it may take a few hours... or days... or weeks... (dunno, it's your dragon, you decide) But hey, he's pretty sure to die.

Another approach: What about his eyes? With his size his eyes would most likely be a good target and possibly a huge weakpoint. It's up to you wether 1880s revolver can pierce it or not, but if they'd do, the dragon is doomed to die, as he's not used to be blind, thus unable to find/hunt enough food.

Hit it with a literal freight train - even though these were slow back then, there is still tremendous momentum involved, especially if you load the train heavily and let it go downhill (on engine power and momentum together). Now finding a way that gets the dragon in the freight trains way is another problem...

What came to the stop of my head is a team of cowboys set up an ambush. One guy on the town's fastest steed gets the dragon's attention and the dragon flies above, giving chase. The other team of gunslingers hide ahead with their biggest rifles and shotguns to all take shots at the dragon's soft gut as he get near. "It might not kill him right away, but ain't no thing on Earth gonna take all these holes and just get up and go home."

73
How to butcher your dragon?
4
Anti-Dragon armor, shields and melee weapons
22
The Nuclear Dragon
6
How hot is my dragon?
5
How to slay my acid dragon?
4
How could this dragon-killing poison work?
20
How could a dragon-proof toy work?
12
How could dragon society avoid interacting with humanity?