Could an underground nuclear test create a volcano?

Is there a possibility of testing a nuclear device underground in order to create a volcano?

I'm talking about a device that could be built with today's technology, not theoretical or future tech.

If there is a possibility, what is the most plausible depth where the device should be placed? It should only be placed so that people could plausibly reach it (e.g. caves, mines, oil wells etc.).

science-based nuclear-weapons
Share
Improve this question
edited May 27 '17 at 16:18

We've seen what big underground tests do. Holes in the ground. The craters don't go deep enough to reach through the Earth crust.

(Follow-up: This crater is an asteroid, not a nuke, but it was estimated at 10 megatons. If the area is otherwise stable, even a big nuke won't be enough.)

When a volcano is about to erupt, pressure builds up over years, even centuries. It is very conceivable that a nuclear explosion will make a volcano that was not yet due to erupt do so prematurely.

When researchers talk about volcanoes, they use terms like "dormant" or "inactive." That's not very precise, and a crack in the plug could reawaken it.

If earthquakes don't trigger volcanoes, probably nuclear explosions would not either.

However even large earthquakes that release incredible amounts of energy and can rupture very near volcanoes have not triggered eruptions. This happened just recently with the 16 April 2016 Kumamoto earthquake and nearby volcano Mount Aso. Despite being an active volcano and a mere ~30km or so from the earthquake hypocenter, the eruptive activity did not change in character after the seismic waves passed through it. We'd certainly learn a lot if someone did go and inject a bunch of fluid into a volcanic area, just as we have learned loads of science from the experiment being done in Oklahoma.

Mud volcanoes are not Krakatoa caliber things but still pretty awesome.
The Sidoarjo mud volcano was supposedly started by people doing fracking. If fracking could do it I bet a nuclear explosion could do it too. I suspect that the difference is that the mud is not as deep subsurface as lava is. 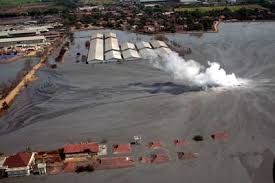 I am not sure what the difference is between a mud volcano like Sidoarjo and a volcanic lahar: definitely a volcano, also mud, super destructive.

Large lahars hundreds of metres wide and tens of metres deep can flow several tens of metres per second (22 mph or more): much too fast for people to outrun.[3] With the potential to flow at speeds up to 100 kilometres per hour (60 mph), and flow distances of more than 300 kilometres (190 mi), a lahar can cause catastrophic destruction in its path.[5] [ 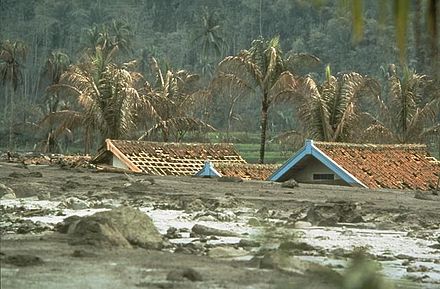 Not the answer you're looking for? Browse other questions tagged science-based nuclear-weapons or ask your own question.

2
How to create a volcano?

31
What computational resources would work for a 550-year climate forecast of our earth?
5
Unplanned Colony: what industrial level could be recreated in the short-term?
8
How can a teen-age mad scientist create polonium?
11
Man-portable anti-satellite weapon
10
Cost of electrolytic hydrogen
21
How long could a nuclear warhead remain functioning underground?
22
Could alien observers detect the Castle Bravo nuclear test?
2
How to create a volcano?