What would be the conditions and causes that would make a planet not spherical?

I have been looking for information on the Internet. I have discovered that the shape of the planets is due to the gravity to which they are subjected, so they are spheres (,but they are not perfect spheres). This also has to do with the sphere: the sphere is the form of least energy and nature favors these forms.

I have also read different posts on the subject. So if these different forms existed I could not find a good explanation of why such a body would be generated or if there could be, for example, a system full of these "planets".

For example this post explains the possibility of having a planet with a cube form.

And this other one clarifies the existence of these types of nonspherical planets, but does not discuss its origin in depth.

So, under these meager knowledge of this theme, I asked myself the question: what would be the conditions and causes that would make a planet not spherical?

I would like the answer also to resolve the doubts that stem from this, for example: Does it depend on the gravity of a single body? Do different magnetic fields intervene?

I do not put limits on "who" or "what" creates the causes or the origin of the form of the planet, but I look for an explanation other than "magic".

How long does this planet have to survive? Long; take the earth as a reference.

At what point do you define your planet as not spherical? You can at first sight see that it is not like a circle, like an ellipse or similar. Based on this Jupiter has a spherical body.

By "planet", do you mean the same as NASA or is, for example, a moon like Phobos a possible answer?

Based off this question on physics SE a dumbell shaped planet is possible if the rotation rate is high enough. Though to speed it up too much results in the planet breaking apart (as seen below). 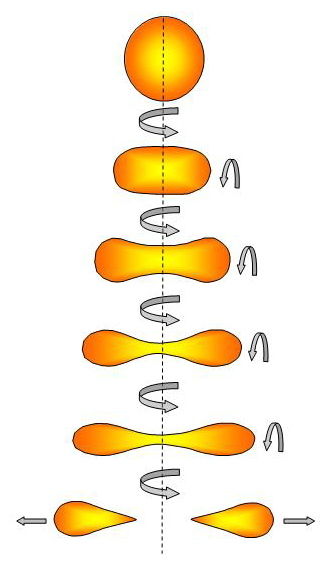 What you want to avoid is reaching the planet's mass shedding limit - the point at which the centrifugal forces are greater than the gravitational attraction and the planet separates. Given the right mass and rotation rate it isn't impossible that a planet this shape could form.

As far as I can see you've kinda shot yourself in the foot with:

By "planet", do you mean the same as NASA or is, for example, a moon like Phobos a possible answer?

You've basically told us it is a sphere and its gravity is strong enough to pull it back into a spherical shape so whatever someone comes up with can't be stable.

That being said you can have something that orbits quickly - and so becomes an ellipsoid (though you said Jupiter doesn't count and that is an ellipsoid). In an extreme this would become a disk...but the centrifugal forces would probably tear the outer bits of rock off if it went that fast.

Another possibility is an early collision (when the planet is hot) with something very fast and tunnel right through from pole to pole. This would give you a doughnut sort of planet and, providing it isn't totally molten, this might be able to hold itself together - torus shaped planets are apparently stable.

So you could have a doughnut shape but I think its unlikely (you might want to ask a second question on just how much energy you would need to punch a hole through a planet for the size you want to get a handle on the likelihood of that).

To have a non-spherical planet you need something that opposes gravity, or the gravity itself to not be so relevant.

A small, light body with high compressive/tensile strength could remain far enough from spherical (most small asteroids are actually potato or wedge shaped).

If the body rotates on its axis, the centrifugal force will make the overall shape tend to an oblate spheroid.

Apart from that, I don't think there are many other ways of getting unusual shapes.

Orbiting close enough to a black hole would have tidal forces mold the planet into a sort of cigar shape (see Greg Evan's Incandescence), but much more likely disintegrate it into a ring or an accretion disk.

For short periods during the early stage of formation you might be looking at a synestia, but such a body isn't all that interesting when you consider that it would be next to uninhabitable by mostly anything except very eccentric, really advanced civilizations.

I would like to point out that it is not solely gravity that makes planets spherical/sphere-like. The rotation of the planet on its axis will also affect this, as well as the matter that makes up the planetary body, and also the kind of object it orbits - these are among the factors you are asking about.

Imagine now a body rotating on its axis at 1000 times as fast as Earth's, it would be disk shaped and emitting some matter from its center. With all this factors think of them as settings that if you change them they will affect the shape and you can even calculate before hand the settings you need to get a star shaped body considering other factor I haven't mentioned like body formation history.

The earth itself is actually not a perfect sphere but 'an oblate spheroid' (see e.g. https://www.scientificamerican.com/article/earth-is-not-round/). Depending on the position and precision of your telescope/camera this might even be visible from space.

The main reason for this lies in the rotation of the planet around its axis. In order to balance and stabilise this rotation the poles get flattened and more mass accumulates at the equator. A faster rotation of should increase this effect, leading to a more ellipsoid planet. An example for this would be the dwarf planet Haumea. In principle this should also be possible for larger planets and not be affected by forces like gravity or electromagnetic fields.

The only thing I'm really not sure what other implications such a fast rotation would have on the planet. While objects or people/animals on the surface should be fine as they are in a stable system, space flight might be a bit more complicated than on earth (maybe just the landing part though). Additionally a fast rotation might have implications for any magnetic field caused by the planet itself (like earth's magnetic field) and also weather patterns.

Hal Cement wrote a very good novel Mission of Gravity based on the idea of a very dense planet spinning so fast that it flattened into almost a disk shape.

He created it as a thought puzzle, working out if it would hold together and, if so, what the effects would be. Gravity would be less at the poles and the weather would be vicious.

It is a very good read. Clement is very good at writing from the alien's point of view. I would recommend any of his stories.

Not the answer you're looking for? Browse other questions tagged planets alternate-worlds nonspherical-worlds or ask your own question.

31
Can a nonspherical planet exist and can it be habitable?
4
Is a spherical core and magnetic field possible in Cube world

33
What would the problems with / consequences of a torus shaped planet be?
31
Can a nonspherical planet exist and can it be habitable?
8
What would the physical properties of this planetary system be?
5
Building a perfectly spherical world
2
What would life be like on a planet that spun just fast enough to negate gravity?
12
What would make scientists realize that they are on a toroidal world?
9
How would a hollow, layered lattice planet work?
9
How would this tidally locked planet be affected by its moon and would the moon have a deaccelerated orbit?
106
Would planets be cubic in my “cuboverse”?
16
How long until two planets become one?