Ten thousand random adults have been magically transported from Earth to an Earth-like planet with a surface gravity of 1.5g. The planet is otherwise completely habitable (enough sun, the right temperature, right mix of amino acids in the flora and fauna, plenty of fresh surface water etc.) There is no coming back to Earth and there is no communication possible with Earth.

How long or how many generations would it take this group of humans to evolve to deal with the extra gravity? Gene editing isn't possible since no tech came with this group. It's just raw survival of the fittest.

The 10K people are all at least 18 years old and in reasonable health. It's a clean 50/50 split between male and female. There are at least 100 doctors and 1000 engineers in the group.

Political concerns, warring factions, technology troubles, diseases not related to the extra gravity are all out of scope. The troubles with being magically transported to a new planet and starting civilization from scratch have been well covered elsewhere.

The question of how many generations is moot; evolution is not a destination. If they survive, they survive. But what do they do to survive? And how does this affect the direction of their evolution over time? Before evolution can begin, natural selection of both individuals and cultural practices will be at play.

The first few weeks would be sheer hell for these unlucky transported souls. The change in gravity wouldn't kill them instantly, but would wear them down, hour-by-hour, day-by-day.

It would be hard on their hearts and circulatory systems. Their blood would weigh 50% more than on Earth, so their hearts would have to work 50% harder to push it around. The elasticity of their blood vessels would be put to the test. Varicose veins would abound. Many would perish by hemorrhagic stroke, and many more would be sporting blotchy, red skin. Feet would swell. Breathing would be difficult, as their diaphragms would have to push up against air and lungs that are now 50% heavier. Blood/oxygen levels would be lower than normal. Fainting and passing out would be common, and would often be deadly; they'd hit the ground with 50% more force. On top of this, their Earth-acquired reflexes and coordination would be hopelessly out of kilter. Bones would be broken, joints wrought, and ankles sprained.

On top of that, they would be extremely vulnerable to the predators inhabiting this world. On Earth, we were spear throwing, long distance running primates. On HeavyEarth, both running and throwing abilities would be severely handicapped. Catching food would be as probable as being food.

Many people would probably die in the first few months, if not weeks. Pregnancy would, in many cases, end up being deadly. The population would bottleneck.

Refuge would be found in salty water. The first generation would head towards the sea; floating would bring them relief from the weight of the world. Sweet relief from sore bones, joints and bulging blood vessels. Pregnant women, and new mothers would spend a lot of time in the water. Young children would grow up being very able swimmers. As on Earth, where the first human migrations followed the shoreline, so too would the transported humans. Net fishing would become a main source of food. The cultural practice of spending time in the water would be rewarded with longer life and more offspring.

Over time, adaptations would start arising that would be both advantageous to the gravity and also the sea. Stronger hearts, stronger veins, bigger lungs, stronger bones, webbed digits and upward pointing noses. Perhaps less hair and more blubber. Maybe even eventually an impressive dorsal fin...

6 months to a year

Some sort of culture is established, acceptance of situation.

They'll all be stronger and fitter than before, though as a species may need to rest more than on Earth, very few are carrying any extra weight round the waist. They may start considering having children by this point.

Born into high gravity, they may not walk as early as Earth born children but they're the surviving children of the fittest and toughest of the 10,000. The evolutionary curve is going to be quite steep for this generation, but children adapt well. Could well have a lower life expectancy than on Earth just through extra load.

The first generation should survive but have lots of problems to overcome strength wise and probably die fairly young of heart attacks.

But I would think the second generation would be adapted and fare better and each generation steadily become more adapted. Kids bodies are much more adaptable to environments as they grow in them than adults.

Humans are very resilient and adaptable. Humans have carved out a niche in nearly every ecological environment from the arctic to the arid desert. They have done so without evolving. A Himalayan human who lived all his life in a colder, low-pressure environment could live happily and reproduce with humans living on the plains of Africa.

The first generation would struggle to move for a few months. After that, musculature would build up, their endurance would increase and bone structures would adapt. They might have problems in their 40's or 50's with joint problems, vision problems, and circulation.

Within three to five generations, subtle differences in heavier bone structure, stronger joints, and increased musculature. The differences would amount to a new race (as in the minor adaptations among people groups we are called races) but still human.

It could take thousands of generations, it might never happen.

It doesn't matter much what happens to your body during your lifetime... those changes are not written into your DNA; which is the only thing passed on to your offspring. So even if you work out all day every day and become a bodybuilder, just like your father did, and just like our grandfather, there's absolutely no chance that your son will have an easier time of it.

To make a genetic change requires a mutation, which is a random event. And in your case, probably very many mutations to make a stocky, muscled human with an advanced heart and circulatory system which can thrive in the increased gravity. Even if you breed any mutations that do occur, like the pedigree of a prized stallion, it could take forever as you wait for all the mutations you want/need to occur by chance.

Unfortunately, such a breeding program is the best case scenario, too. Modern humans have so much exogenetic factors that genetic mutations contribute almost nothing to our survival chances. We're born helpless and useless and underdeveloped, just to support our big brain. Because the brain learns culture and society, and culture and society improve your chances of survival more than muscles. (at least it did for many generations. The last few seem to have gotten more stupid).

Survival of the fittest is also survival of the most attractive, so even in the very unlikely event that all the right mutations take place, maybe your first squat, muscled, no-necked barrel chested dwarves are technically better suited for 1.5g, but they just aren't hot enough to pull some chicks. 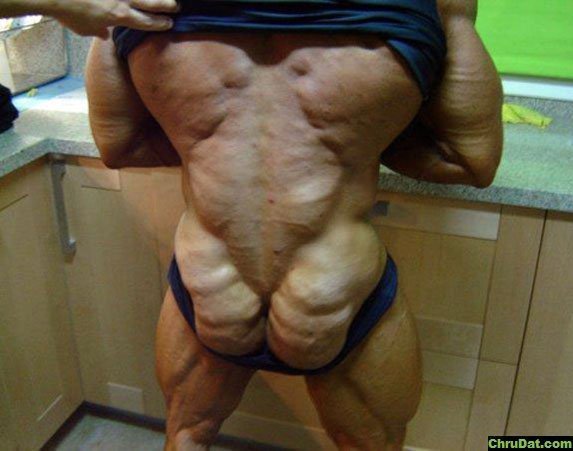 It depends greatly on the technology and civilization level.

If people survive and live normal lives as-is, thanks to the engineers and city life, then no evolution will take place. Other issues will overwhelm any small effect of reproductive bias.

If technology is knocked back to pre-industrial times, child mortality is high, large families are needed for a mostly rural lifestyle, then children who are better suited will survive.

Now the question is how long will it take for useful varieties to appear? This is a complete unknown, but note that the human gene pool is very shallow and still shows the effects of previous bottlenecks — this might be why we invented technology rather than adapting to new environments! Note the difference: brown bears turned into polar bears; humans learned how to make warm clothes.

On the other hand, overall stature might be “easy” as a simple change in hormones. People might become significantly smaller over a period of a few generations. In this case, we are still talking 5 to 10 generations though.

The only way evolution happens is if a certain trait makes it more likely for people to reproduce. Some other answers have answered that people would become short and stocky in a few generations, but that's wayyy to fast.

Let me explain. Being at 1.5g is about the same as gaining 50% of your body weight. So a 6', 160 pound person would have an extra 80 pounds on his back. After a short time, say 1 year, he will be used to this weight. His muscles will grow and he will be much stronger, faster, and have more stamina than when he arrived.

A 5'5" 110 pound man would transform into a 165 pound man. And just like his buddy, after a short time he will become stronger, faster, and have more stamina.

But the only way for evolution to occur is for one of these people to have more kids than the other. Is one of these people necessarily more attractive to the women of this society? No. Over the generation, neither of these people would have a decided advantage based on just their new weight. There are a thousand other things that are evaluated. Personality, success, etc. Assuming the colonists society is not too unlike our own, physical specs will take a back seat to other traits.

In conclusion, people would row to be much stronger than the average earth human fairly quickly, then not much would be different.

~A few thousand to ten thousand generations, with the latter being more likely

It is basically impossible to say, mostly becasue we don't know what adaptations are necessary in detail and even if we did predicting the evolution of such things is speculative at best. Plus as has been said evolution is not a destination, there is no end point to adaptation, problems may well persist forever. Evolution is full of things we are just stuck with, like bad backs, from using things in ways they never originally evolved for, and different gravity would definitely fall under that.

That all said you can come up with a safe estimate for when said people will be physiologically distinct from other humans. In 2-3 million years we know a new hominid species can evolve so when in doubt go with that. That comes out to around ~10,000 generations as a safe estimate.

Also consider it took humans ~3000 years/~130 generations to evolve lactose tolerance after we domesticated cattle so there is your bare unbelievable minimum. You should increase that by an order of magnitude considering you are talking about a whole suite of adaptations even for a minimum.

Not the answer you're looking for? Browse other questions tagged science-based evolution humans or ask your own question.

12
What is the minimum and maximum gravity level that nearly all humans can sustain over a 5 year period?
25
Could a human baby develop and grow into an adult under constant 3-4G?

36
Would humans be able to derive nutrition from foodstuffs found on alien planets?
11
Is life required for a world to be habitable for humans?
16
How does gravity affect evolution of life?
3
Are all combinations of right-handed and left-handed amino acids and sugars equally likely?
3
Zero Gravity Evolution in People
14
How large can surface gravity anomalies grow before the planet becomes uninhabitable?
19
Is it possible to place a permanent probe on Uranus?
6
Different human-survivable universes
7
Life on Earth without a magnetic field?