I've been considering the term 'redneck', which is described by Google's info engine as coming "from the back of the neck being sunburned from outdoor work." As I've grown more involved with the Redwall community, I've started considering what an equivalent term may be for furred creatures in the size range between a mouse and a badger. As they have fur, the noticeability of a sunburn on the neck would be significantly decreased. Are there any other known, plainly visible effects of prolonged labor under direct sunlight in furred creatures? And, what term might be derived from these effects to describe such creatures?

People with brown hair can have hair get lighter in the sun, reddish and even blondish. That can happen to animals too. Here is a dog who spent a lot of time in the sun from http://candidnebcr.livejournal.com. I take from the page his red-blond coat used to be darker. 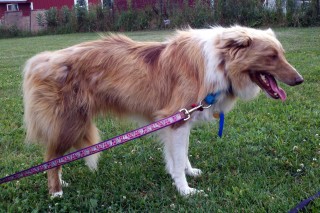 This link has a before and after of a dark brown horse who got sunbleached. https://www.chronofhorse.com/forum/forum/discussion-forums/off-course/94616-sun-bleaching-horse-coats

So: have your critters work in the sun, and their dark brown fur bleaches to reddish blond on their necks.

Having spent way too much time in the American south I can tell you that being a "redneck" has little if anything to do with skin tone resulting from outdoor labour. Granted​ that may be the origin story, but things have progressed... well... "progressed" probably isn't the right word... from there.

Redneck is very often a pejorative term. As in backward, racist, low class, gun-toting, hillbilly... None of these connotations have anything to do with the origin. But this is often a common usage.

"Country folk" often have mixed reactions to the term. Some embrace it, others reject it, usually depends on who's saying it and why they're saying it. That said, the terminology in your world will likely largely depend on the connotations. Is it an insult or an in-term?

Consider the difference between "country mouse" and "work hound" for instance.

After your comment I'm thinking that "Dirt-claw" may fit the bill. It could work as a derogatory term with an agrarian root.

I love Redwall! Been a long time since I've read it though. According to Smithsonian and Pet 360, animals can totally get sunburned.

One of the articles mentions that the ears and nose can become quite susceptible, so perhaps "Red-nose" (Although quite Christmas-y), or "Red-ears" as those are the first areas that I can think of noticing on a furred animal. Of course, I'm no veterinarian. That said, are you seeking a derogatory term for them akin to Rednecks because they are similar to rednecks, because they have the same color red in their titles, or for some other reason? Do they have any real reason to be sunburned any more than any other creature in the Redwall universe? Do the Redwall creatures in this story wear red paint or clothing or badges of any kind? Answering those questions will probably be more important in deciding a good term.

Yes! There are! Look up temperature and the effects on Siamese cat fur!

This a type of albinism where the fur color is regulated by temperature. While it's connected with body temperature regulation, there is a noticeable difference if the animal spends time in the sun or heat or cold.

Some arctic animals have a seasonal change from bright white to brown and back again, but this isn't the same thing (although it may be governed by the amount of light, and therefore relevant, since a working class fur person who works outside would be more likely to change.

This is not typical of all furred animals, but within a species with these sorts of traits, pejoratives such as fur-changer (to denote one who works outside) might be relevant.

Another thing you might look into, which has parallels with human experience is weight. Until recently in our history, poor people were skinny and rich people were beefier. A little avoirdupois was a status symbol, showing your family had the resources to feed you properly. Think ... Reubenesque. In some societies this has been made quite explicit:

So ... pejorative terms for your rural poor might include skinnies or sticks. Ee gejer Skinny tailer bek boi a farm!